American Lit: Red Dutton gets a light for his cigarette from an unnamed nurse during his stay at Gotham Hospital in February of 1938.

Another month, another loss.

That was the story in the winter of 1938 for the New York Americans, who ended January with a 4-2 home defeat at the sticks of the Montreal Canadiens. Four days later, the Amerks started their February schedule with a 6-1 drubbing at Madison Square Garden by the Detroit Red Wings. That was their fourth loss in a row, and extended their winless streak to nine games. With a little over a month to go in the regular season, the Americans were in a fight for their playoff lives, just two points ahead of the Montreal Maroons and the basement of the NHL’s International Division.

Forty-year-old Red Dutton was in his third season as the New York coach and manager. His interest in the team, shall we say, ran deeper still: having captained the Americans as one of the NHL’s most effective and bruising defencemen until his retirement as a player in 1936, he was also a co-owner of the team.

The Americans’ slump had Dutton in a rage. He bent Harold Parrott’s ear after the Red Wings’ shellacking and Parrot, the hockey writer for the Brooklyn Daily Eagle, was only too happy to share the coach’s none-too-complimentary musings with his readership.

Were the Americans altogether too clean-living to prosper in the rough and the tumble of NHL hockey? Dutton wondered, citing the example of his goaltender, Earl Robertson. “He never looks at a drink or a girl,” Dutton was quoted as saying, “goes to bed early and trains on a running track just to be in shape for hockey — and yet there must be spots in front of his eyes.”

Turning to defenceman Joe Jerwa, Dutton speculated that maybe he had too much money in the bank to care about buckling down and playing effective hockey. “But that can’t be the trouble,” Dutton went on, “because most of the other men haven’t the price of a ham sandwich and they still seem to play as if they didn’t care.”

Dutton advised Parrott that the team’s biggest lack was a defenceman who could rush the puck. He was apparently willing to name those he thought weren’t getting the job done, deeming fifth-year defender Al Murray “the worst of the lot,” according to Parrott.

I’m not the one who’s going to draw the line between that very public scorn and what happened next. It’s not for me to say that Dutton ending up in hospital a week later had anything to do with payback. I’m just reading old newspapers here and patching together what I’m seeing there.

The Americans played their next two games against the Montreals, tying the Canadiens 3-3 in Quebec, then coming home to beat the Maroons 3-1.

That was on the Tuesday, February 8. The Americans didn’t play again until the following Sunday, away to the Red Wings. With the annual Westminster Kennel Club moving in to occupy Madison Square Garden for the week, Dutton decided to take his team to Detroit early. Doc Holst of the local Free Press reported the exchange Dutton had with Jack Adams, his Red Wings counterpart, when the Americans showed up Friday at the Olympia to practice.

“Nope, no ice,” Red answered. “They drove us out to put on a dog show.” There was a bit of hurt pride in the redhead’s voice.

It was during that February 11 practice that Dutton suffered the injury that put him in the hospital and into the picture above. The coach was out on the ice, skating with his team when — well, here’s how the Associated Press accounted it:

He tried to carry the puck past his best body-checker, 155-pound Al Murray. Murray smacked his boss with a sound body-check, and Red went flat on his back.

He suffered through the weekend, much of which he seems to have spent abed at his hotel convinced that it was just a bad case of lumbago. He still managed to arrange a trade from that prone position, gaining winger Johnny Sorrell from the Red Wings in exchange for Hap Emms. The Sunday game finished as a 2-2 tie, whereupon the Amerks headed for home.

It was more than lumbago.

At some point back in New York, Dutton ended up in Gotham Hospital up on East 76th Street, under the care of Dr. Morton K. Hertz. A Thursday dispatch in The Daily News reported him to be “encased in a 10-pound plaster cast” as a result of his collision with Al Murray. The diagnosis was dire:

Dutton had torn the lower back (latissimus dorsi) muscles loose from the hip. They must heal before he can stand erect. Hemorrhages that produced a kidney stoppage further complicated his condition, causing intense pain.

The AP listed him as resting uncomfortably, if “very much ashamed of himself,” insofar as he’d never been seriously injured during his 15 professional seasons as a player. The last time he’d been in hospital, the Winnipeg Tribune cheerfully noted, was during the First World War, when he suffered “a bad dose of shrapnel.” That was a reference to his service with Princess Patricia’s Canadian Light Infantry, with whom he’d been badly wounded near Vimy in 1917. During his recovery, he’d been in danger of losing a leg to gangrene. 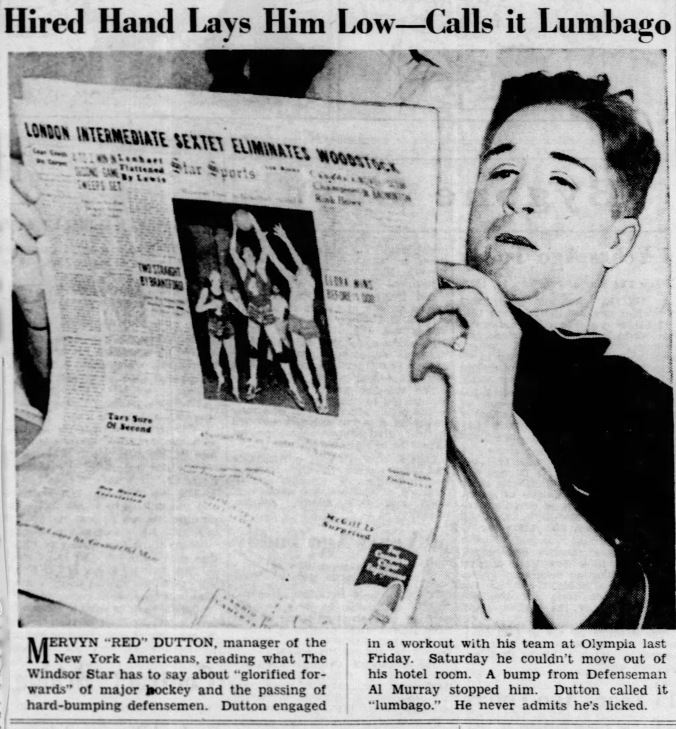 In 1938, with Dutton sidelined, veteran defenceman Ching Johnson stepped out of the Americans’ line-up to take his place on the bench for a Tuesday meeting with the Canadiens. The As won that game, 4-0.

In fact, Johnson continued to steer the team through a further four games.

That in and of itself is worth a notation: nowhere in the annals of NHL coaching records can I find Johnson getting credit for this brief coaching career of his, including in the NHL’s online register, here. Attention, NHL coaching historians and stats-keepers: Johnson’s name should be added (and Dutton’s adjusted) to reflect the respectable 3-1-1 record that then Americans compiled under their emergency-measures boss.

Red Dutton returned to duty for the Americans’ February 27 home game against the Montreal Maroons. Though they lost that night, 4-2, Dutton’s crew did make it into the playoffs later in March, going two rounds before they fell to upstart Chicago Black Hawks in the semi-finals.

Clarence Campbell was the referee for the second game of that series, controversially calling back a goal by the Americans’ Eddie Wiseman that would have won the game for New York and sent them to the Stanley Cup finals. As it was, Chicago prevailed in overtime and in the next game, too, ousting the Americans. Dutton’s protests didn’t help that, of course, but they did include a vow that his team would have no part of any subsequent playoff game officiated by Campbell.

Campbell’s post-reffing career was in the Canadian Army during the Second World War. His return to hockey came in 1946, when he took over as president of the NHL, succeeding the man who’d taken the job after Frank Calder’s death in 1943 — Red Dutton.

The end of the 1938 season saw Ching Johnson call it quits as an NHL player, subsequently taking his talents west to serve as playing coach for the American Hockey Association’s Minneapolis Millers. Before leaving New York, he was rewarded as all the Americans were that season: as reward for their ’37-38 playoff successes coach Dutton handed each man a bonus of $250.