Whistleblowers 101: Officials line up on the ice in Buffalo at the 2019 NHL Exposure Combine for up-and-coming referees and linesmen (and women).

A version of this post appeared in Section B, page 8 of The New York Times on Wednesday, November 20, 2019.

BUFFALO, N.Y. — When Jessica Leclerc skates into the corner of the rink, she blurs. As she stops, she’s already hoisting an arm and whistling a penalty. A decisive chop of hand on sleeve signals a slash.

This is what hockey justice looks like, as it’s summarily served — or would, if this were an actual game. It’s just a drill. No actual hockey players have strayed or been sanctioned as Leclerc makes for the blueline to do it all again.

Welcome to day two of the National Hockey League’s Officials Combine, an annual late-summer festival of phantom calls and pucks dropped mostly in rehearsal. Over four days in mid-August, 86 young referees and linesman from across North America convened at Harborcenter, the two-rink training facility in Buffalo, New York, next door to the NHL Sabres’ lakefront home at KeyBank Center.

Every spring, on this very ice, the NHL puts the best draft-eligible juniors through their paces. This is a showcase like that, but with fewer fans, not so much media, and many more striped sweaters in evidence.

Part training camp, part clinic, the Combine is a job fair for some. Since 2014, the NHL has hired 27 officials who’ve auditioned at the Combine. Others here are in an earlier, exploratory phase, first-timers with a whistle, just trying to figure out whether the officiating life might be for them.

“Not everybody gets to the NHL,” said Al Kimmel, the league’s director of scouting and development for officiating. “It’s similar to the players: two or three per cent, just the very elite.”

As much as anything else, the idea in Buffalo is to create a safe, positively charged space for officials, empowering and building up a brand of fit, confident, assertive hockey arbiters who’ll go forth unto the ice of North America to keep its hockey players in line.

For more than a century, NHL officials have been policing the game with flawless efficiency, faithfully upholding the rulebook while tidily getting the job done without fear or favour.

Nobody remembers any of that.

It’s the errors that fix in the minds of players, coaches, and fans, the penalties that weren’t called, the goals that maybe shouldn’t have counted. “It’s a hell of a job,” NHL president Clarence Campbell said in 1964, ruminating on the referee’s lot. “A man has to have iron in his soul, the will to command.”

The fact that Campbell himself refereed in the NHL in the 1930s doesn’t seem to have softened his sympathy. As president, he once fined a linesman $50 for working a game unshaven. Several referees quit the NHL outright during his tenure, decrying a lack of league support.

Hockey is a whole other game than it was in those years, faster on the ice and an altogether bigger business. One thing that’s remained constant: the culture of high-definition scrutiny, complaint, and blame that officials inhabit.

For all the drama attending the St. Louis Blues’ unlikely June championship, this spring’s playoffs were also skewed by several officiating miscues. Notable among those:  an overtime goal in theWestern Conference finals between the Sharks and Blues that saw San Jose’s Timo Meier palm the puck to a teammate. That should have stopped play, but none of the four officials presiding saw it. Under the rules then in place, the play was unreviewable.

The goal, and the outrage, stood.

Asked for his view after Meier’s handling, NHL commissioner Gary Bettman barely kept his cool. “What I thought was, it would be good if I kept my head from exploding.”

Soon after the season’s end, the NHL’s Board of Governors approved a new raft of rules, expanding video review.

“You’re always doing a debrief,” Stephen Walkom said in Buffalo. Before he took over the top job for the first time in 2005, the more than 600 NHL games he refereed included a pair of Stanley Cup finals. He now oversees a staff that includes 44 referees and 38 linesmen as well as a network of managers, supervisors, and scouts.

“Officials make mistakes,” Walkom said, “and they’re always held accountable in that regard.”

If the speed of the game makes it more exciting to watch, it also heightens the challenges for those trying to keep tabs of hurtling pucks and bodies. The advent of video-review has aided officials; it can also raise stakes and pressures.

“At one time,” Walkom said, “people would think, oh, the referee was great because he got 80 per cent of the calls right. Now, if he gets 99 per cent of them right, but gets one wrong, it’s a big issue.”

“When you sit in my chair, you always hear that officiating needs to improve,” he said. “So you think, okay: how?”

Launching the Combine in 2014 was part of the answer. Going back to Campbell’s time and beyond, the NHL’s system for keeping the league supplied with officials was never particularly systematic.

“The resources and the focus on officiating was kind of limited,” said Al Kimmel. “We run it just like a team now. Bring in new draft picks every year and watch them develop and push the group in front of them to make everybody better.”

“In this day and age,” Walkom said, “whether you’re a linesman or a referee, you need to be an athlete.” 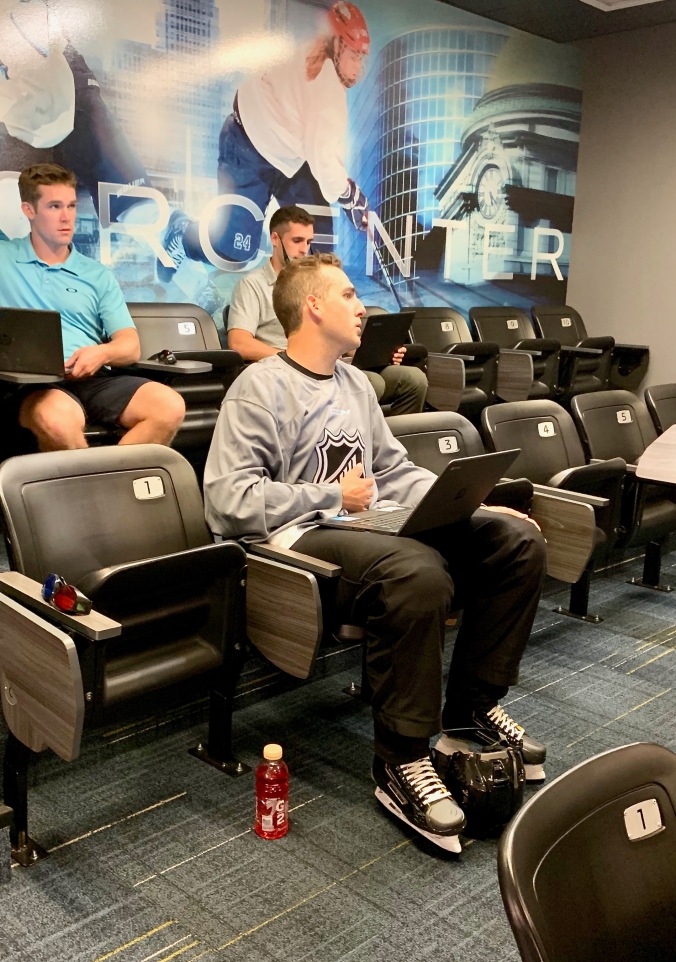 Schooling: In Buffalo, officials clattered, skates on, into classrooms to face-off with laptops that took them through suites of visual drills appraising depth perception and information-processing.

In Buffalo, Leclerc and her colleagues divided their wakeful hours between ice and the nearby gym. There they dashed and pedaled and planked, working themselves into one sweat after another under the attention of high-performance fitness instructors and staff from Walkom’s NHL officiating office.

They clattered, too, skates on, into classrooms to face-off with laptops that took them through suites of visual drills appraising depth perception and information-processing. In another room they focussed on interactive screens streaming an app, uCall, designed to test how fast they reacted to plays unfurling in real time.

Throughout the weekend, attendees also picked up sticks to play in a tournament of scrimmages in which they took turns officiating under the guidance of Combine graduates now working in the NHL. The hockey was fast, skillful, and mostly whistle-free. The clamor from the benches wasn’t all for goals that went in: on this ice, with this crowd, an iffy offside was just as likely to bring down the house.

Corey Syvret was a Florida Panthers draft pick who played eight seasons as a minor-league defenseman before he attended the Combine in 2017. He adapted quickly enough to be hired by the NHL that same fall. Now 30, he’s worked two full American Hockey League seasons along with more than 30 regular-season NHL games.

The intensity is what he values in his new calling, being “captured” by the game he’s in.

“As a hockey player, you’re kind of reckless of there,” he said in Buffalo between mentoring sessions with the new generation of officials. “You’re trying to see what you can get away with.”

A native of Saco, Maine, Leclerc, 34, came to the Combine having officiated hockey since she was 13. When she’s not on the ice, she works as an administrator at an assisted-living facility; when she is, she has supervised youth and tier-one junior hockey and served as a lineswoman at the 2018 Winter Olympics in South Korea.

Women are still waiting for their chance to work an N.H.L. whistle. Eleven women attended this year’s Combine, four of whom went on to work NHL pre-season rookie tournaments. Without committing to a timeline, Walkom said that it was a matter of when they took the next step, not if.

Leclerc isn’t sure she’ll be part of that, but that doesn’t stop her from focussing on the ceilings she’s intent on breaking. “Hopefully,” she said, “by being here this weekend it really shows that women can compete, and that gender really has no role in officiating.”

“You better love it,” Walkom said of those wondering whether a life in stripes might be for them. Friday lunchtime, as camp attendees lined up for tuna wraps and pasta salad, TVs overhanging the concourse showed highlight reels from the NHL season past. Instead of extravagant goals by Sidney Crosby, the cameras followed mic’d–up refs as they colorfully called it like they saw it.

Walkom stood by smiling. “You’re perfect at the anthem. And then you’re slipping away.”

“The best golfer in the world is the one that recovers the quickest from the bad shot,” he said. “In hockey, you make mistakes, and you recover quickly. You need that mindset, as a ref.”