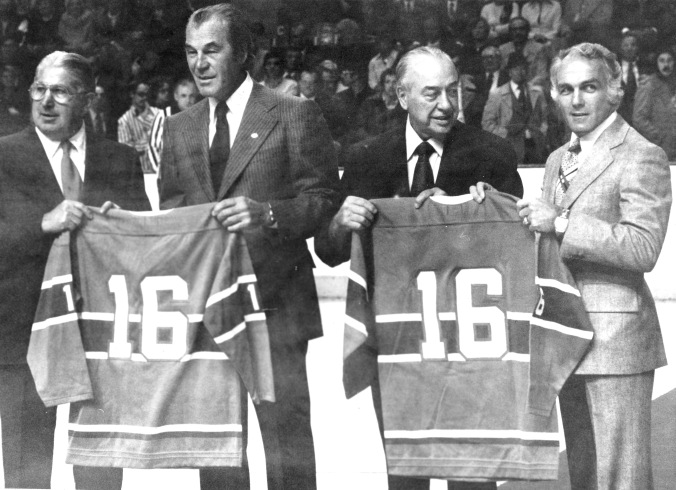 He wasn’t the first Canadien to bear the number 16 on his sweater in the NHL, just the last: a few months after a 39-year-old Henri Richard retired in 1975, the number he’d worn for all 20 of his magnificent seasons in the league was raised to the rafters of the Montreal Forum in his honour. In December of ’75, Richard, who died today at the age of 84, was joined at a pre-game ceremony to mark the occasion by former Hab greats (from the left) Elmer Lach, Butch Bouchard, and Toe Blake. Lach wore number 16 for 12 seasons before the Pocketful Rocket made the team as a 19-year-old in 1955. Blake was a 16, too, when he played for Canadiens, though only for a single season, whereafter he switched to 6. (Bouchard was briefly numbered 17 before he settled his more familiar 3.) Right winger Gus Rivers is generally named as the man who first wore 16 for Montreal, though maybe it was just for a game or two when he first came to the team in 1930: for most of his short stint with Canadiens he had 15. A total of 26 players wore 16 before Richard’s greatness took it out of circulation, including Jean Pusie, Gizzy Hart, Red Goupille, and goaltender Paul Bibeault. To date, Montreal has honoured 18 numbers (including Lach’s 16, in 2009), but in 1975, Richard’s 16 was just the fourth in team history to be raised aloft, following Howie Morenz’s 7, brother Maurice’s 9, and Jean Béliveau’s 4.