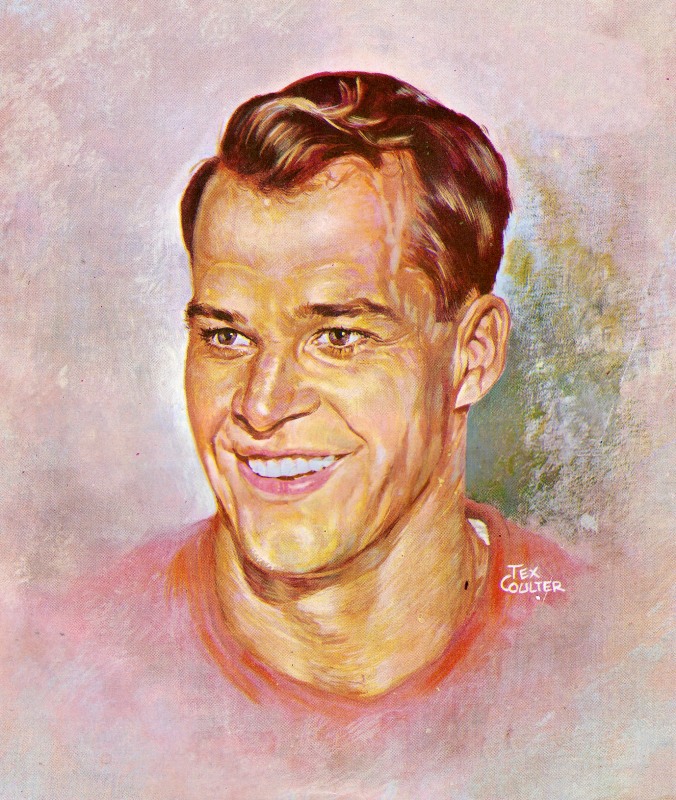 Cover Story: Tex Coulter’s handsome portrait of a happy Gordie Howe adorned the cover of a 1957 edition of Hockey Blueline. The accompanying story was bylined (if not, maybe, entirely written by) Ted Lindsay. No buried ledes here: “Gordie Howe — The Greatest!” laid out the author’s premise in the first two lines: “Gordie Howe is the greatest player in hockey! Gordie, in fact, may be the greatest hockey player ever.”

March of 1964 was a busy month for Gordie Howe. To finish up his 18th season with the Detroit Red Wings, he scored four goals in 10 games, giving him 26 on the season and 566 for his career. He ended up, again, as Detroit’s leading scorer, fifth overall in the NHL. Both The Hockey News and the Associated Press voted him to their Second All-Star teams, which is where he’d end up when the official NHL version was named in April. What else? As his 36th birthday loomed, on March 31, and Howe was signing a 10-year promotion deal with Eaton’s department store, he mentioned that he planned to play two more years of pro hockey before he retired and went looking for a coaching job.

Also: on this very date in ’64, another Sunday, deep in Chicago Stadium, Gordie Howe asked a young fan a question that — just guessing here — he thought of as rhetorical. Did the fan, Howe inquired, want a punch in the mouth?

Having just helped his team even its first-round playoff series with the Chicago Black Hawks at a game apiece, Mr. Hockey might or might not have gotten the answer he was or wasn’t looking for: we just don’t know.

What’s clear is that Howe put down the bags he was carrying to deliver the aforementioned punch — “a good one,” as he described it, later, to reporters.

Robert Rosenthal, 20, was the fan. He and his friend George Berg had gone down after the game to wait outside the Red Wings’ dressing room. This we know because the next day, Monday, Rosenthal presented himself at Chicago’s Monroe Street municipal court with an idea of obtaining a warrant for Gordie Howe’s arrest on a charge of assault.

“When the player came out,” Rosenthal recounted, “I said, ‘Why don’t you learn to play a little cleaner?’” Howe’s reply: “You want a punch in the mouth?”

To that, Rosenthal told the court, he said this: “You’re good at fighting guys smaller than you.”

Rosenthal testified that he’d retreated south, to nearby Cook County Hospital, where he’d taken on eight stitches to close the cut to his mouth.

Judge John Sullivan wasn’t impressed. “I will not,” he told Rosenthal, “perform a useless act.”

“On the basis of the evidence you’ve given me, any judge in my opinion would find Mr. Howe not guilty, since you admitted that you provoked him.”

Back in Detroit, Howe told reporters what he knew — and added several new punches to the mix-up.

“I asked him if he was looking for trouble. Then he stepped into me and I let him have a light punch on the nose.”

“I took another step toward the bus and he hit me on the back of the head, so I put down both travelling bags and let him have a good one.”

“I don’t think they have the right to swear at you,” Howe said, summing up, “and I’m not going to stand for it when they use my mother’s and father’s name in vain.” 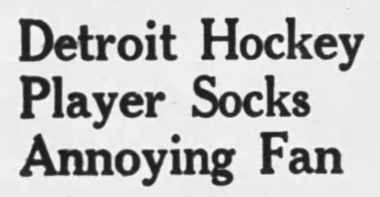 In the aftermath of Rosenthal’s dismissal at court, his mother, whose name may have been Veronica but is given in at least one account as Veronia, mentioned that lawyers would be consulted. Sure enough, before the week was out, just in time for Howe’s birthday, Rosenthal filed a lawsuit seeking US$25,000 for damages from number 9 and the Red Wings, claiming “Howe’s unprovoked attack humiliated, embarrassed, and held him up to public ridicule.” He noted, too, that his wound had become infected and swollen to three times its regular size.

Howe and/or Wings may have settled the suit — whatever happened, the incident vanished from the press. They had largely, true to Rosenthal’s claim, sided with the hockey player over the man who accosted him. A scrapbook of not exactly sympathetic headlines from that week, 56 years ago, might include:

As for the NHL, president Clarence Campbell said he’d investigate, though he didn’t expect anything to come of it. “I’m not too excited about it,” he said, “and I doubt there’ll be any league action against Howe. After the game is over and he’s out of the rink, it’s not really an NHL affair, although these incidents can’t do anything for our public image.” 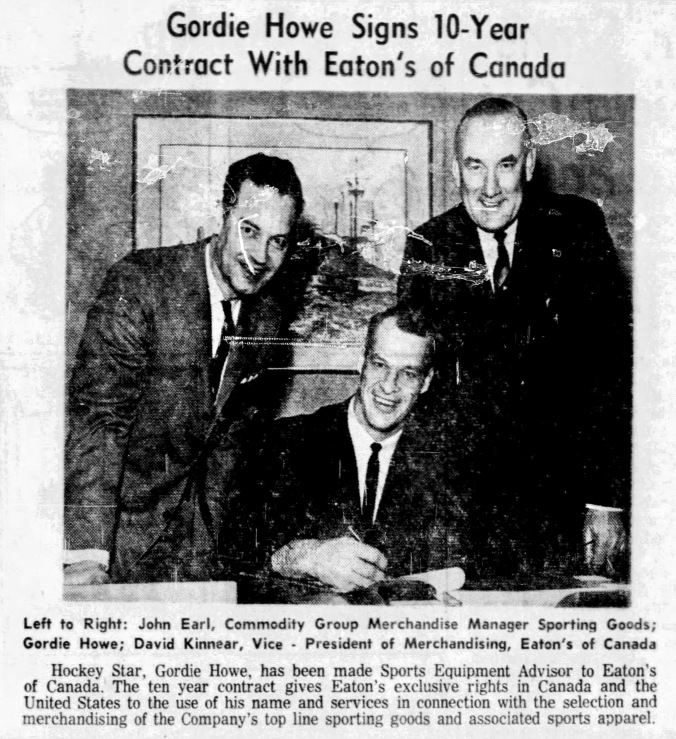