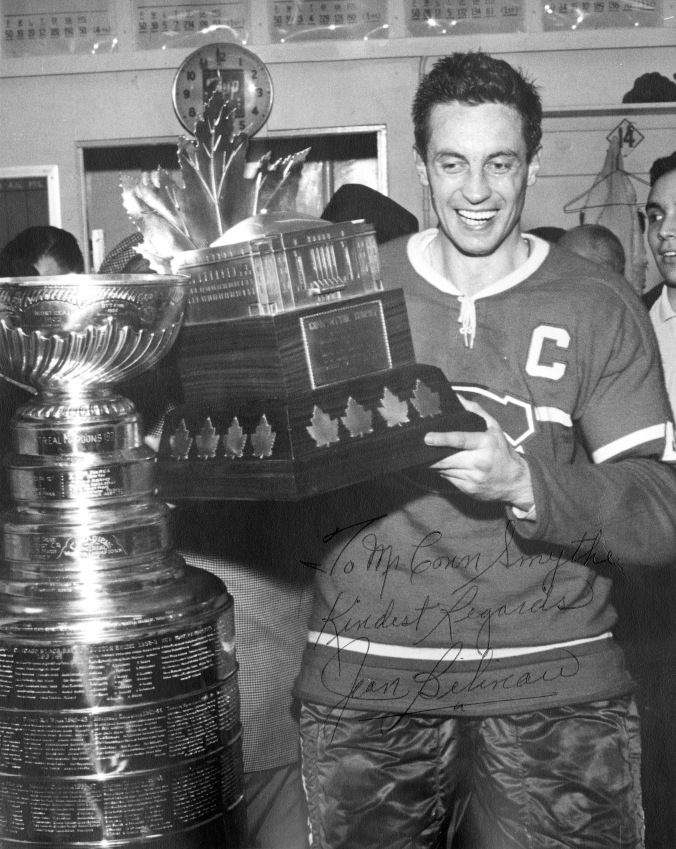 Conn Man: Jean Béliveau with the silverware he accumulated on a Saturday of this date in 1965, when his Canadiens won their 13th Stanley Cup and the Montreal captain was chosen as the inaugural winner of the Conn Smythe Trophy as playoff MVP. (Archives of Ontario)

“General opinion in these parts is that NHL governors should be herded to the saliva box if they fail to name Montreal’s master craftsman Jean Béliveau for the new Conn Smythe Trophy and the loot that goes with it.” Easy (if not entirely sanitary) for columnist Vern DeGeer to write, as he did in the Montreal Gazette on a Saturday of this same date in 1965 ahead of the game that would decide the winner of that year’s Stanley Cup. By the time it was over, the hometown Canadiens had dismissed the Chicago Black Hawks by a score of 4-0 to win the seven-game series and claim the 13th Cup in franchise history. Sure enough, when NHL president Clarence Campbell stepped up to announce the winner of the inaugural Conn Smythe, recognizing the playoff MVP, it was the Montreal captain’s name he spoke. Fifty-five years ago tonight, Béliveau, who was 33, won the handsome new trophy and its accompanying loot of $2,000 (about $16,000 in 2020 dollars), half of which was awarded by the NHL, half by the Canadiens.

It’s true that Chicago’s Bobby Hull had been in the Conn conversation, earlier in the series, when there were also fleeting mentions that Montreal defenceman J.C. Tremblay deserved a chance. Hull did end up as the playoff scoring leader, gathering ten goals and 17 points in 14 games to Béliveau’s eight and 16 in 13 games. The Montreal captain’s showing in the latter days of April sealed the deal: he recorded two goals, including the winner, as well as a pair of assists in Montreal’s 6-0 game-five win. May 1 he again scored the game-winner, and later added an exclamatory assist.

If nobody really disputed Béliveau’s worthiness, there was a brief hue and cry in the days leading up to the decision. The new trophy, which cost $2,300, had been donated by the Toronto Maple Leafs in honour of their influential president, coach, and manager, who was also an honorary NHL governor. While NHL’s other individual awards were decided by a poll of sportswriters, by Smythe’s own request it was decreed that the winner of the new award would be annually voted by the league’s governors.

There were six of them, at the time, august names all, adorned with initials to prove it. From Toronto there was C. Stafford Smythe, Conn’s son; Bruce A. Norris stood for Detroit while his half-brother, James D. Norris, represented Chicago. The New York Rangers had William M. Jennings. Weston W. Adams was Boston’s man, and from Montreal it was J. David Molson.

The arrangement was this: at the conclusion of the final game of the finals, the jurors would file their ballots with Clarence Campbell and he would duly announce the winner. I’ve seen a single reference suggesting that the governors would decide on a shortlist of three names before they did their voting, with points awarded on a 5-3-1 basis, but I don’t know whether that’s how they actually proceeded, in ’65 or the years that followed — there’s no public record that I can find of finalists or voting tallies.

The hue that was cried was, mostly, Jim Vipond’s. Another leading columnist of the day, he was sports editor at the Globe and Mail, wherein he lit a small rocket on Thursday, April 29, 1965, under the headline “Smythe Trophy Vote a Farce.”

His issue? Three of the NHL governors — Boston’s Adams, New York’s Jennings, and Norris of Detroit — hadn’t attended a single game of the final round. Chicago’s Norris and Montreal’s Molson had been at all five games to that point; Toronto’s Smythe had seen four.

“Each absentee delegated authority to an executive member of his organization who is probably more qualified than his boss,” Vipond allowed. “But this was not the intent nor the meaning of the terms of reference.”

“The missing governors are at fault on at least two counts. First, they should have been in attendance out of respect for the man after whom the trophy was named. Second, this is the world series of what they loudly refer to as major league sport. By their absence they depreciate the league they represent.”

“Considerable thought was given to the method of selecting the winner. Managers, coaches, and newspapers all were rejected.

“Obviously the system in use is a poor one and if the governors are really interested in advancement of hockey they should consider a better scheme before next year.”

Vipond liked an idea floated by Ron Andrews, the NHL’s publicity man and chief statistician. “It is his proposal that the league invite six former players, one from each team and stars in their own day, to attend the playoff as guests of the NHL. There would be three at each game of the semi-finals, will all six at all games of the finals. They would cast a ballot after each game with the league president counting the votes at the end of the series.”

“That would produce a worthy winner and would be far better than a remote control system operating out of Florida or some other place far removed from playoff action.”

I don’t know how the governors reacted to Vipond’s reproach — or if the three absentees were sufficiently stung to fly in to see the final game of the series. There was no official response, and no change to the system.

That didn’t come for another six years. Since 1971, the winner of the Conn Smythe has been voted by members of the Professional Hockey Writers’ Association. They picked Montreal’s goaltender, Ken Dryden, that spring, after his Canadiens won their 17th Cup. By then, the league loot accompanying the Conn Smythe seems to have grown to $1,500 (about $10,000 in today’s money). And while I’m not clear whether Canadiens were matching that figure, it is the case that Sportmagazine stepped up to give him a car for his efforts.

For Béliveau, the 1971 Cup was the tenth and final one he won as a player: he announced his retirement later that summer.

A Stitch In Time: Toronto artist and editorial designer Nadine Arseneault’s embroidered rendering of Béliveau and his ’65 Conn Smythe. You can find her on Instagram @nadine.design.