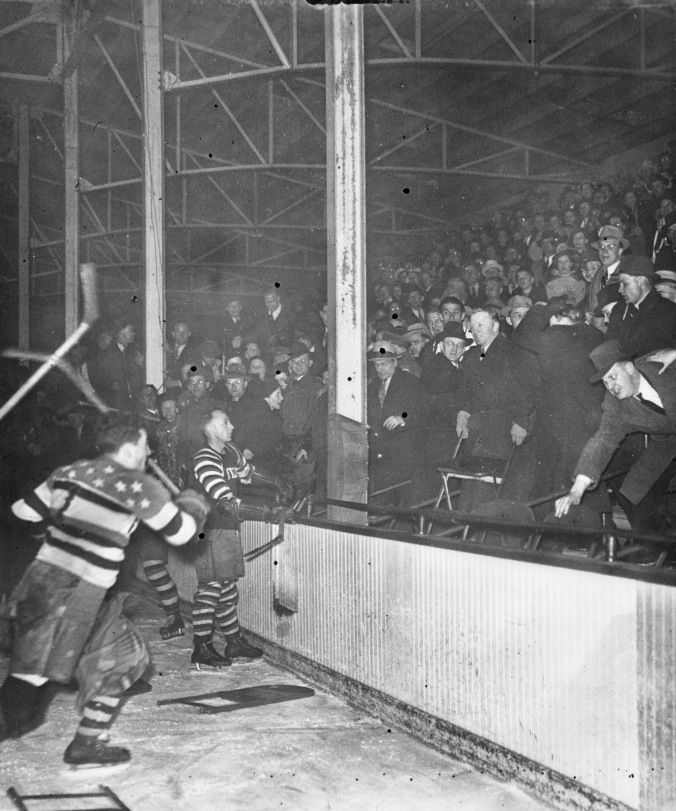 As detailed in yesterday’s post, Jean Pusie’s long hockey career was, shall we say, rife with incident. Proof positive here above: that’s Pusie on the charge, wearing number 1 on the back of his St. Louis Flyers’ sweater, during the third-period chaos that ensued at the Wichita Arena one Saturday night in February of 1939, when the Flyers were in to play the local Skyhawks.

According to The St. Louis Globe-Democrat, the trouble started when St. Louis defenceman Bouncer Taylor took a penalty. Ralph was his given name; a decade earlier, he’d played in the NHL for Chicago and the New York Rangers. When a Wichita fan accosted him on the penalty bench, Pusie went to his aid, “slashing from the ice into the stands” at Taylor’s attacker.

Other fans joined in then, swinging, and hurling, the heavy metal folding chairs they’d been seated on. Pusie was hit on the head — and knocked unconscious, according to several accounts — before the counterattack we’re looking at here.

There was no mention of this when Pusie gave his version of events a few days later. The volatile defenceman had retreated to his home in Chambly, Quebec, by the time a reporter named John Leblanc tracked him down and transcribed the testimony he was willing to give in what Leblanc termed his “Habitant-ringed English.”

“You know,” Pusie began, “that’s one league where you must defend yourself. The National League, she’s tough. The International-American, she’s tough. I’ve played both. But the American Association, he’s toughest. The Murder League we call him.”

“I stay on the ice, you understood. One fan knock me down with a chair. The fan, I say, is always right. Another knock me down with another chair. I still think the fan is right. But then a third fan come at me with chair. I am knocked to my knees. I get up. The fan swings chair. I lift my stick and he puts up his chair to defend himself. When he lowers chair, I just let stick go at his chin, rifle style. The fans are wrong.”

Back in Wichita, two of them went to hospital with what were initially reported to be serious injuries, though both were soon released with no further details forthcoming. Zola Moore, 23, was one of them, though whether he was the first, second, or third assailant in Pusie’s story, I don’t know. He does appear in the photograph above: he’s the one with a hand to his head, next to the man gripping his chair as Pusie charges.

Pusie’s injuries were reported to be “deep scalp cuts and neck lacerations.” Despite these — despite having been knocked out — despite having assaulted a man with his stick — he returned to the game, head bandaged, when it resumed.

Pusie played the next night, too, when the teams met again back in St. Louis — despite having been arrested after the game Saturday night in Wichita, jailed, released, in time to join his teammates on the train back to Missouri, wherein he arrived with head swathed, as might have (the Post-Dispatch wrote) “done credit to a fellow caught in the explosion of a three-inch shell.”

As mentioned yesterday, Pusie was duly fined in a Wichita courtroom, though he missed the proceedings. Zola Moore later filed a lawsuit against Pusie, the Flyers, and the Skyhawks. He was seeking $5,000 in damages; I haven’t been able to trace how the suit turned out.