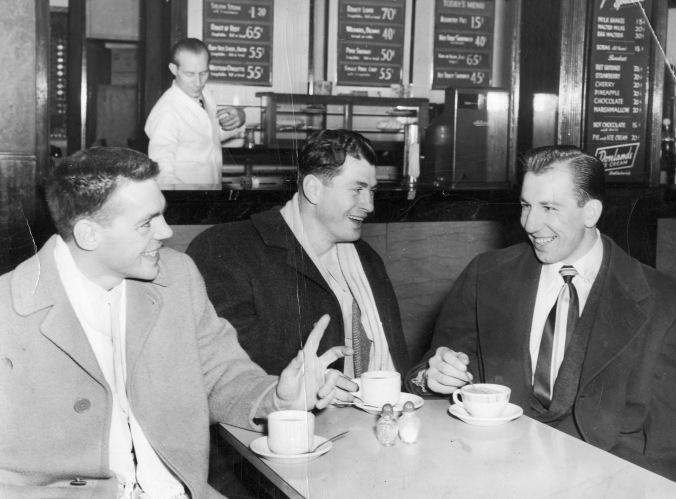 Strategy Sesh: He was born in Kitchener, Ontario, on a Sunday of this date in 1923, so Howie Meeker turns 97 today, which makes him the second-oldest living NHLer, after Steve Wochy, who’ll be 98 next month. Happy returns are in order to Meeker, then, along with (why not) a photo from the middle (though possibly late-ish) 1940s. Meeker (left) shares a coffee and a laugh with Leaf teammates Vic Lynn (middle) and Joe Klukay. Friday is the anniversary of Klukay’s birth, in Sault Ste. Marie, in 1922; he died at the age of 83 in 2006. Both Meeker and Klukay won four Stanley Cups with those mighty Leaf teams of the 1940s, while Lynn was aboard for three of those championships. More immediately, let’s take a moment to study the cups on the table: is it possible that Klukay’s is harbouring a frothy latte? On the menu behind, a Sirloin Steak is a pricey $1.20. Pie and Ice Cream? A very reasonable 20 cents.