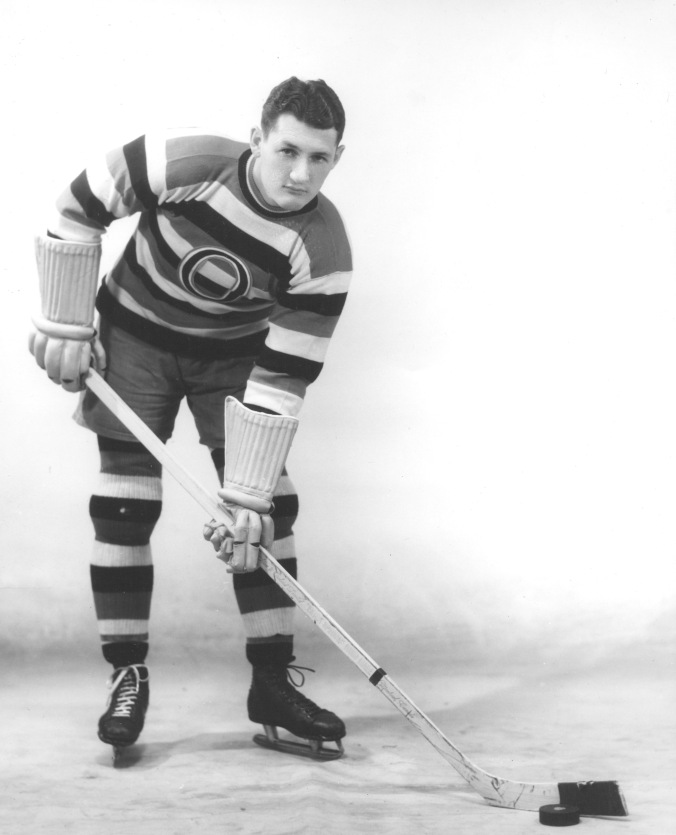 In The O-Zone: After four seasons with Boston, Cooney Weiland was traded in 1932 to Ottawa’s (original) Senators in exchange for Joe Lamb and $700. He played two seasons with Ottawa before finding his way to Detroit and from there, eventually, back to Boston.

Here’s how the story goes. There was a river in Egmondville, and a winter, but no hockey. How that’s possible, in southern Ontario, in the early years of the new, 20thcentury, I don’t know, but that’s the story. So it was that young Ralph Weiland, our young hero, had only read about hockey, he’d never seen it, let alone played: hockey, to him, was all on the page. How to get from here to there? This elsewhere hockey dogged the boy’s imagination until finally it burst those bounds. So (in the story), Ralph and an unnamed friend jumped a freight train in their desperation for discovery.

If they’d travelled southeast just 20 kilometres down the line they might have run into a tyro Howie Morenz, whose childhood was underway in nearby Mitchell. Instead, the boys went north, ended up in Seaforth. If you study your Ontario map over towards Lake Huron, you’ll notice that Egmondville is actually right up alongside Seaforth, with just a few kilometres between the two — but the story says the boys took a train, so we’ll stick with the train. In Seaforth, one winter’s night, they found what they were searching for in the arena, which they snuck into with the help of a friendly ticket-taker.

I don’t know about the friend, but the hockey was all that Ralph, anyway, had hoped for. He was apparently so thoroughly puckstruck by the time the game was over that he stole a stick before legging it for home.

The friend here departs the narrative: back home, Ralph alone tries out his new pilfered prize, stickhandling a stone. That’s no good, obviously. He has the bright idea, then, of prying off the rubber heel from one of his father’s Sunday-best boots — much better. If you were expecting a Dickensian conclusion here, wherein the boy is cast out for his crime, has to make his way in the world alone thereafter, bravely facing up all its trials and troubles as stoutly as David Copperfield himself — sorry. In Ralph’s case, his father is fine when he finds out about the thieving and the vandalism, and our intrepid hero is launched on his hockey way.

That’s the way it goes, anyway, in a freewheeling Minneapolis Starfeature dating to the later 1920s, by which time Ralph had aged and prospered and was widely known as Cooney Weiland. He was stopping in Minnesota to play for the AHA Millers; in just a few more years he’d make his NHL debut. I’m not saying that the story isn’t true, but I will suggest that, categorically, it might be worth shelving it as close to the fairytales as to the annals of history.

The fact is, nevertheless, that November 5 is the day Cooney Weiland was born in Egmondville in 1904 (it was a Saturday, then). A centreman, Weiland did get back to Seaforth to play as a junior with the local Highlanders. He subsequently made a move up to Owen Sound, where he helped the Greys win the 1924 Memorial Cup.

Weiland would go on to star with the Boston Bruins, playing middleman to wingers Dutch Gainor and Dit Clapper on the Dynamite Line in the late 1920s, winning two Stanley Cups, and topping the NHL’s scoring chart in 1930. Trades took him to the Ottawa Senators and Detroit Red Wings in the ’30s before he made a return to Boston. He was named captain of the team in 1937. Later, he coached the Bruins, steering them to a 1941 championship. He ended up across the Charles River, coaching the Harvard hockey team from 1950 to 1971. He was inducted into the Hockey Hall of Fame in ’71.

One of the All-Americans Weiland oversaw during his time with the Crimson was a defenceman named David Johnston, who revered him, and went on to serve as Canada’s 28th Governor-General. Johnston gave a eulogy at his old coach’s funeral when Weiland died in 1985 at the age of 80. During his time in office, the Right Honourable GG kept a reminder of his mentor in his Rideau Hall office in Ottawa: an ornately carved chair that had been awarded to Weiland for his conspicuous Harvard career.