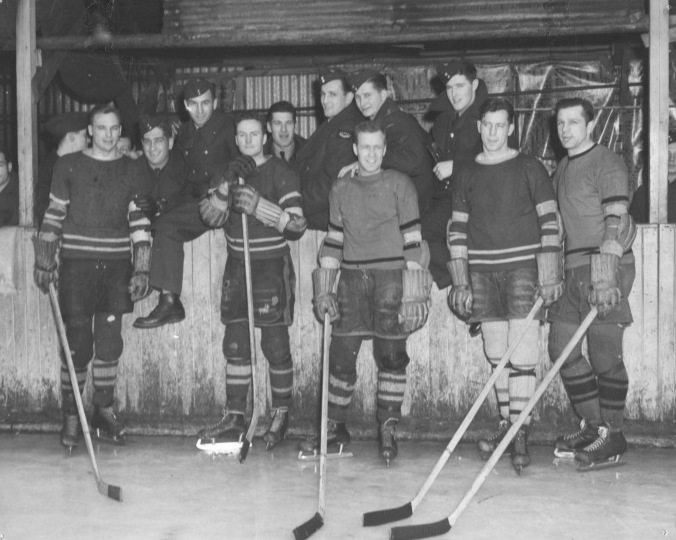 Wartime precautions kept the Royal Canadian Air Force from identifying the precise setting for this memento of a gathering of high-level hockey talent: the caption affixed to the back of the photographs says “somewhere in England” and leaves it at that. My best guess is that it dates to early 1944 and the rink we’re seeing is the one in Durham in Yorkshire, which is where the RCAF’s Sixth Bomber Group was stationed. Wherever Canadians gather there will be, of course, hockey, and so it was that the Bomber Group Championship came to be played in March of ’44 between teams named the Rossmen (not for Art Ross, but after the CO of an air-station) and the Lancasters.

The final was a two-game, total-goals series featuring some high-powered talent: the Rossmen iced a pair of former Boston Bruins stars in Flying Officer Milt Schmidt and Leading Aircraftman Bobby Bauer, while their former NHL linemate, Pilot Officer Woody Dumart, turned out for the Lancasters.

The Rossmen won the first game 5-0. To start the second, the Lancasters took a 2-0 lead. It didn’t hold: Bauer eventually tied the game before Schmidt scored a pair of goals ten seconds apart. Final score: 4-3 Rossmen.

The men posing here were all serving in the RCAF that spring, though not all of them played for the championship. From left, they are: Roy Conacher (another Boston Bruin before he enlisted); Alf Pike (an erstwhile New York Ranger who’d go on to coach the team); Paul Platz (who played pre-war with the AHL’s Providence Reds); Jimmy Haggerty (a member of Canada’s team at the 1936 Winter Olympics who also played a handful of games with Montreal); Bob Whitelaw and Sid Abel (both Detroit Red Wings); Frank Boucher (a member of the RCAF team that won the 1941-42 Allan Cup and a nephew of the Hall-of-Famer of the same name); Lloyd Gronsdahl (Boston); Ernie Trigg (AHL Cleveland Barons); Milt Schmidt and Woody Dumart (Bruins both).

One thought on “somewhere in england”