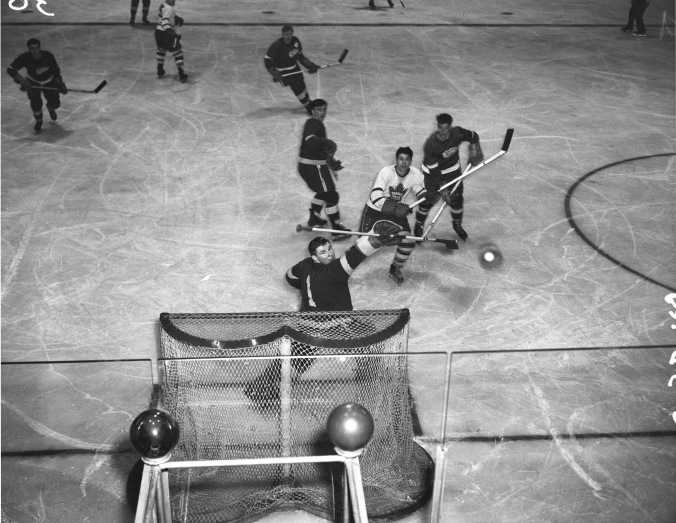 Keep Your Eye On The Puck: Harry Lumley guards the Detroit goal at Maple Leaf Gardens on Saturday, March 20, 1948. The home team beat the Red Wings 5-3 on the night to clinch first place in the NHL. The foreground Leaf is Vic Lynn, with Howie Meeker cruising out near the blueline. Detroit’s skaters are, from the left, Red Kelly and Bill Quackenbush in the distance, Ted Lindsay and Gordie Howe closer to the camera. Detroit and Toronto would meet again later in April for Stanley Cup, with the Leafs prevailing in four straight games.

Born in 1926 in Owen Sound, Ontario, on a Thursday of this date, Harry Lumley was — and remains — the youngest goaltender ever to have started an NHL game: he was just 17 when he made his debut in net for the Detroit Red Wings in December of 1943. As he got older, the man they called Apple Cheeks won a Stanley Cup with the Wings (in 1950) along with a Vézina Trophy in ’54. He was a Leaf in Toronto by then; Lumley also skated, in the course his 14-year NHL career, for the New York Rangers, Chicago Black Hawks, and Boston Bruins. Inducted in the Hockey Hall of Fame in 1980, Harry Lumley died in 1998, aged 71.

(Image: Turofsky/Imperial Oil, from A Century of NHL Memories: Rare Photos from the Hockey Hall of Fame, used with permission)