Castle On Cabot Square: An architectural rendering of the Forum’s 1960s-era renovation.

It was 25 years ago, on a Monday of this date in 1996, that Montreal’s Canadiens took a final turn on the ice of the famous Forum. They beat the Dallas Stars by a score of 4-1, for the record, though the game itself was truly the undercard for the pre- and post-game ceremonies by which Canadiens bade farewell to the arena that was their home for 72 years and some 3,500 games. A crowd of former Canadiens was on hand that night, including 20 Hall-of-Famers. Guy Lafleur and Jean Béliveau were on hand for the game’s ceremonial opening face-off, and when Maurice Richard joined them at centre ice, the crowd stood and cheered for ten glorious minutes.

I was there that night, high up at the north end, Section 601, with the overflow press, near where they used to keep the ghosts. I won’t say that I was there under false pretenses, though it’s true that I may have stretched those same pretenses to accommodate my powerful need to witness and distill the history unfolding … I mean, Émile Bouchard was out there on the ice, for Gump Worsley’s sake — and of course Gump was there, too. Both Butches Bouchard, in fact, father and son!! Mahovliches, major and minor! Lach and Reardon and Moore, Henri Richard, Savard and Lapointe, Ferguson, Shutt, Dryden, Cournoyer! It was unbelievable. 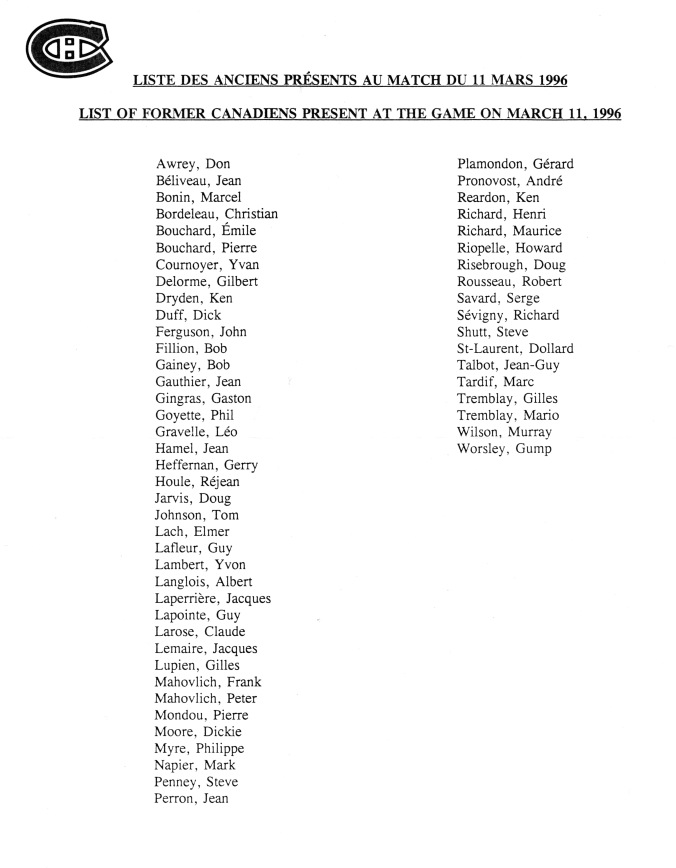 I was freelancing for The Financial Post in those years, reporting for the paper’s arts section from several non-fiscal sectors — that is, I wrote book and movie reviews, travel features. The Post didn’t need me covering a hockey game, even a historic one, but I was able to convince my editor that the auction on the day after that Forum finale was enough of a business story to demand my presence. The Canadiens didn’t mind accommodating me — or if they did, they didn’t mention it. (The feature I filed is here.)

Ezra Soiferman was at the Forum that night, too, and he was toiling harder than I was. It may be that we passed one another in the halls as the old arena’s time as the home of the Habs expired; it’s possible. A Montreal filmmaker and photographer, he attended the game as a guest of Forum anthem-singer André Ouellet.

Soiferman took some 250 images as he wandered the arena that night. It wasn’t until 2016 that he collected some of them into a book, which he published privately to commemorate the 20th anniversary of Canadiens’ departure for the Molson (now Bell) Centre. Other than the cover image, below, and a photo of a Guy Lafleur greeting Ouellet, there’s nary a hockey player in it: this particular album is filled with last glimpses of fans and ushers, custodians and purveyors of chiens chauds, security guards, corridors, stairwells, seats, doorways, escalators, grey girders, and — yes — urinals. It’s an odd, honest, altogether charming chronicle of a venerable old arena on one night at the end of an era.