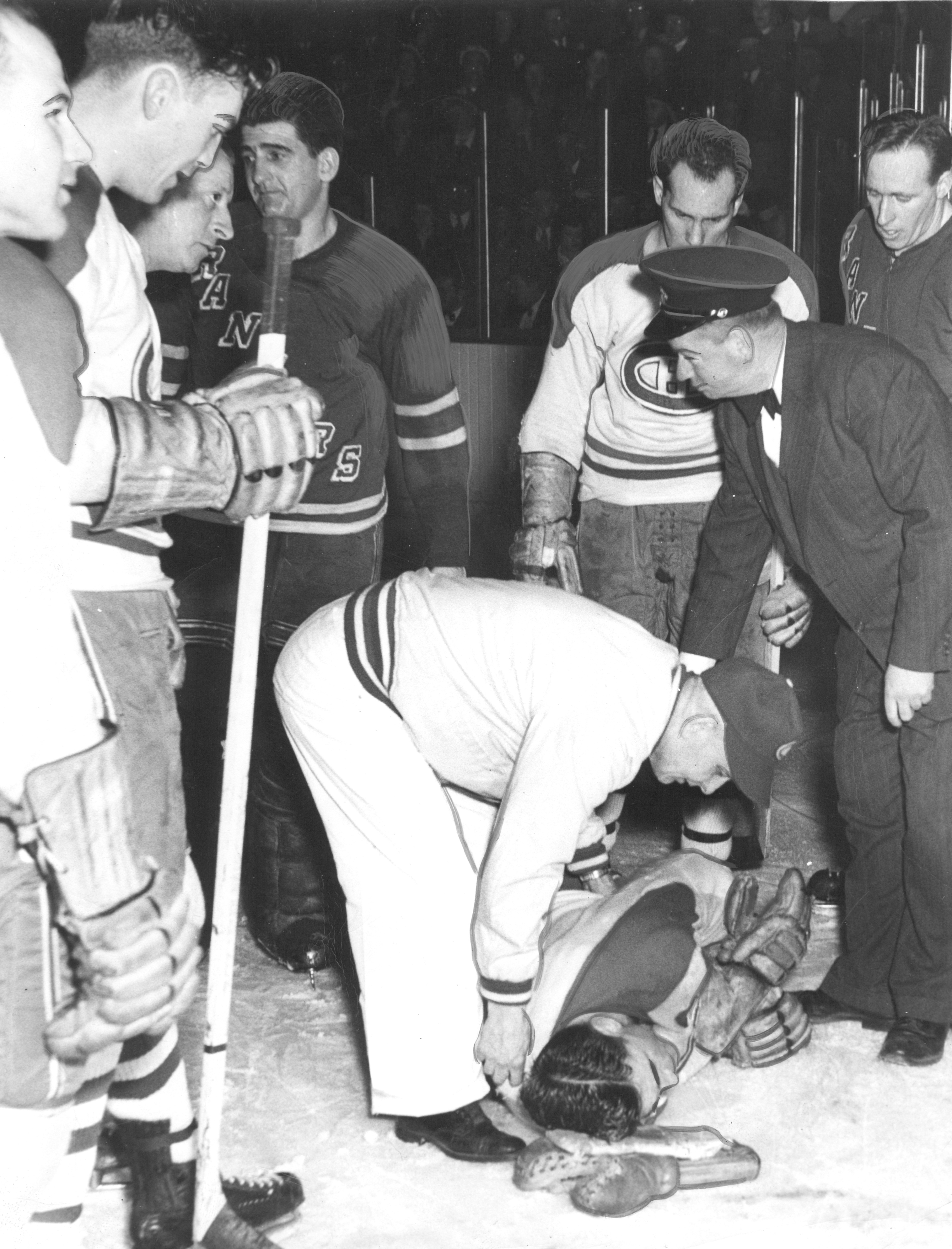 Downfall: Ken Reardon dislocated his left shoulder on the night of April 1, 1950, in Montreal’s 3-2 loss to the New York Rangers at the Forum. It turned out to be the last game of his NHL career. Attending the patient are, from left, Montreal’s Glen Harmon, possibly Kenny Mosdell, unknown, New York goaltender Charlie Rayner, Floyd Curry, and Ranger defenceman Gus Kyle. The trainer is (I think) Bill Head; don’t know the name of the Forum rink attendant.

The game was all but over at the Montreal Forum, and the score was a sour one for the local team on this night, 71 years ago, with the visiting New York Rangers nursing a 3-2 lead. The loss, which would put the Canadiens down two games in their opening-round series against the Rangers, would prove costlier still: as the third-period clock ticked down, Montreal’s Ken Reardon went down in the New York zone.

It happened to be the All-Star defenceman’s 29th birthday. Born in Winnipeg on Friday, April 1, 1929, the future Hall of Famer had earlier in the evening assisted on Norm Dussault’s first-period goal.

That was the very last point of Reardon’s seven-year NHL career — insofar as it turned out to be Reardon’s very last NHL game.

“Canadiens were engaged in an all-out drive on the New York nets when the crash came,” Vern DeGeer reported in the pages of the Gazette. Following a face-off in the Ranger zone, Reardon went after a straying puck. “He was ridden into the boards by big Gus Kyle and collapsed in a heap.”

X-rays taken later that night at Montreal’s Western Hospital told the tale: Reardon’s left shoulder was dislocated. It was the same one he’d hurt a year earlier in a game against Toronto.

With Reardon out of the line-up, Montreal fell to the Rangers in five games. In the opinion of New York coach Lynn Patrick, Reardon’s absence was a key to the Rangers’ success: Montreal just couldn’t replace his drive, rugged defensive play, and capacity to rally a faltering team.

Reardon seems to have been aiming to return to the Montreal roster in the fall of 1950. He rehabilitated his shoulder that summer, even played some baseball with his Canadiens teammates. But by September, with training camp approaching, the shoulder and a longer-term back problem was enough to persuade him that the time was right to retire.

“Reardon is convinced that he should withdraw from active play while he is still in one piece,” was the message to the press from Frank Selke, Montreal’s managing director.

And so, that fall, Reardon started his new job for the Canadiens, as what Selke described as an ambassador of good will. He later served as assistant GM as well as vice-president of the team, playing a part in six Stanley Cup championships in all as a player, manager, and executive.

Also in 1950: the former defenceman got married, in December, to Suzanne Raymond, daughter of Canadiens president Senator Donat Raymond. As Montreal’s playing staff worked on their Stanley Cup project, the happy couple honeymooned in Montego Bay in Jamaica.

One thought on “down + out with kenny reardon”