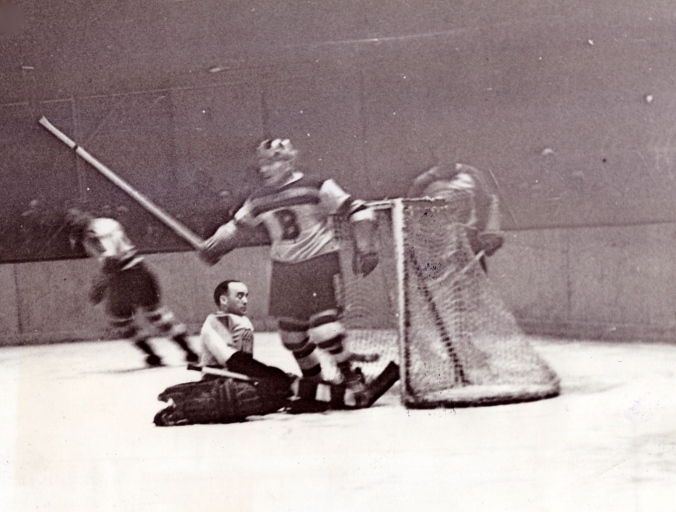 Crease Violation: Boston winger Lloyd Gross celebrates the puck he’s put past a dispirited Roy Worters of the New York Americans in a game at the old Madison Square Garden. “Once a bosom companion of little Roy Worters,” the Daily News reported, “[Gross] skated right up to him and let him gave it, zingo! Like that.” Just a month after Ace Bailey’s grievous head injury, this game marked the first time a New York crowd had seen the Bruins wearing, to a man, “the new-fangled helmets.”

Hockey pundits used to like to talk about Roy Worters’ stature, which was slight, and I guess that hasn’t changed. “Worters, who is but five feet and two inches tall, weighs 128 pounds, and has hands so small he cannot catch the puck as it speeds toward the goal mouth, is one of the best skating goalies in hockey.” That’s from a 1928 dispatch, just as a trade was converting Worters from a Pittsburgh Pirate into a New York American.

Born in Toronto on a Friday of this date in 1900, the tiny-handed man they called Shrimp played 12 NHL seasons, most of those for the Americans. He won a Hart Trophy in 1929, finishing ahead of Toronto’s Ace Bailey and Boston’s Eddie Shore, and collected a Vézina for his miniature efforts in 1931. He never won a Stanley Cup. Worters died in 1957 at age 57. He was voted into hockey’s Hall of Fame in 1969.

One thought on “small comfort”