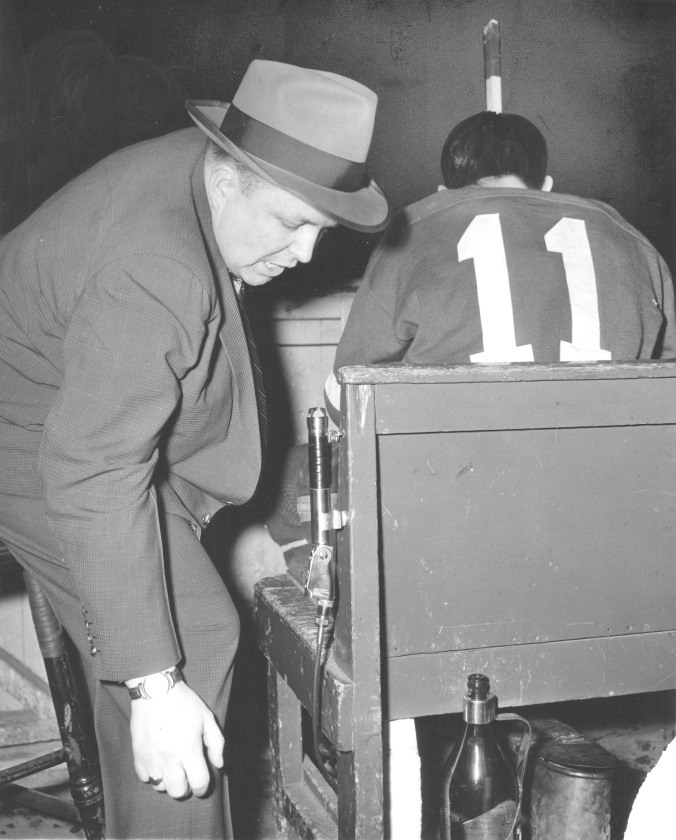 Talk Talk: Detroit coach Jimmy Skinner broadcasts instructions on the bench at the noisy Olympia in January of 1956. Listening up is #11 Marty Pavelich.

Jimmy Skinner’s spirits were high in mid-January of 1956. The coach of the Detroit Red Wings had his charges on a five-game winning streak, and he’d just seen them beat the league-leading Montreal Canadiens 2-0 at Detroit’s Olympia. Skinner was in his second year as Red Wings coach, and he had a record to maintain, having led the team to a Stanley Cup the previous year.

The new year had Skinner tinkering with his team, shifting Red Kelly from defence to left wing, slotting Ted Lindsay onto Alex Delvecchio’s wing, trying Metro Prystai on right wing instead of centre. Sitting third in the standings of the six-team NHL, the Red Wings were making ground on the second-place Rangers and the Canadiens ahead of them.

Playing a leading role in the shutout win over the Canadiens was goaltender Glenn Hall; centre Dutch Reibel had scored both Detroit goals. Credit was due, too, to the home crowd who’d cheered the Wings on: the 14,988 spectators who’d showed up on a Sunday night to see the Canadiens game made it the largest of the season to date.

Fans in the Olympia had been so enthusiastic, in fact, that Skinner’s players had been complaining that they couldn’t hear him on the bench. Skinner’s solution, pictured here, was to have a microphone installed, connecting to a series of “squawk boxes” installed strategically along the length of the bench facing the players. I don’t know how long this broadcast system lasted. I can report that while the Red Wings did make it back to the finals that year, they ceded the Stanley Cup to the Canadiens, falling in five games that April.