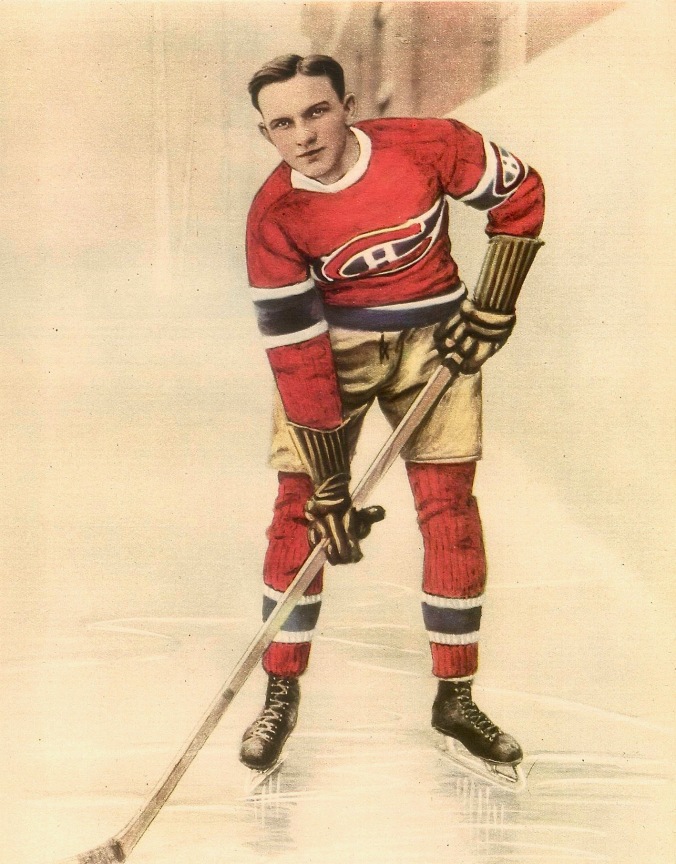 Gus Rivers only played parts of three campaigns with the Montreal Canadiens — a total of 104 games, regular-season and playoffs — but you have to credit his timing: at the end of two of those seasons, 1930 and ’31, he helped the Canadiens to win Stanley Cup championships.

A Winnipegger, Rivers was, we know, born on this date, November 19 — but was it 1909, as many of the standard references record, or a year earlier? I’ll tend towards the latter: birth records from Manitoba and his U.S. military draft registration have Rivers originating in 1908. His hockey lineage isn’t in doubt: before he got to the NHL, Rivers played for the Elmwood Millionaires, the University of Manitoba, and the perfectly named Winnipeg Winnipegs. He was 22 in January of 1930 when the Canadiens signed him.

He’d started as a forward in Manitoba, before shifting back to defence; Canadiens’ coach Cecil Hart put him to work on the wing when he got to Montreal. Upon his arrival, it was noted in the local Gazette that his “real name” was Gustave Desrivieres, though there doesn’t seem to be anything beyond anecdotal evidence that this was the case — it’s possibly that this was purely a fiction perpetrated by the Canadiens for the interest of their French-Canadian fans, in the tradition of declaring Howie Morenz’s background as Swiss. A year later, in the wake of another Stanley Cup triumph, the Gazette included this in their biographical round-up of the victors:

Gus was born in Winnipeg and played amateur hockey from 1924 to 1930 when he was recommended to Canadiens and signed by them. He came here under the name of Gustave Desrivieres and for a time he was thought to be French. Some of the American hockey writes still think so.

Rivers scored his first NHL goal on the last night the 1930 regular-season schedule, when the Canadiens dispatched the New York Americans by a score of 8-3. Teammate Howie Morenz scored five that night, so the fact that Rivers’ landmark tally didn’t get a whole lot of play in the press next day maybe isn’t so surprising. His second goal was more of a headliner: later that same month, Rivers scored the overtime winner that put an end to what to that date the longest game in NHL history, capping 68 minutes and 52 seconds of sudden-death hockey as Montreal beat the New York Rangers 2-1 to open their Stanley Cup semi-final. Here’s the Gazette’s L.S.B. Shapiro describing how it went down:

Signed by Canadiens this season, Gus Rivers watched almost every game from the bench. He’d never got his chance to play. A shy, retiring chap, his favorite occupation on the team’s journeys was to sit in a corner of the car all alone and render the popular ditties to himself with feeling. Between times he received the joshing of all members of the team with a broad, good-natured smile.

It was this youngster that Manager Cecil Hart, of the Canadiens, put on the ice in the overtime session after all of the Flying Frenchmen were tottering on their feet. Rivers dashed out on the ice, ran the Rangers ragged for a while, then when Aurele Joliat and Sylvio Mantha struggled up the ice, he skated in front of the Rangers net. The rubber came his way from Mantha’s stick, and after 128 minutes of battling, the game was finally settled when Rivers slammed that puck past John Ross Roach.

The applause from a nerve-wracked crowd was deafening. But more significant was the fact that the Canadiens, exhausted and tottering, lifted the gawky youngster on their shoulders and carried him into the dressing room, Gus Rivers had achieved recognition at last.

Rivers didn’t have too many more NHL goals in him — he only score four more in his career — but he did sink another overtime winner past the Rangers’ John Ross Roach, this one at Madison Square Garden in January of 1931.

In the wake of Montreal second successive Cup that spring, L.S.B Shapiro projected a big future for Rivers. “Gus possesses a neat poke check. He breaks fast and is dangerous around the goals.”

“From present indication,” the Gazette’s man gushed, “he will stand among the Morenzes and the [Pit] Lepines before many years have passed.”

As it turned out, while Rivers started the following season with Montreal, he finished it with the Providence Reds of the Can-Am League. He never made it back to NHL ice and after five further seasons with the Reds, he stowed his skates as a pro. Gus Rivers stayed on in Rhode lsland after his hockey career ended and, in 1985, that’s where he died. He was 75.