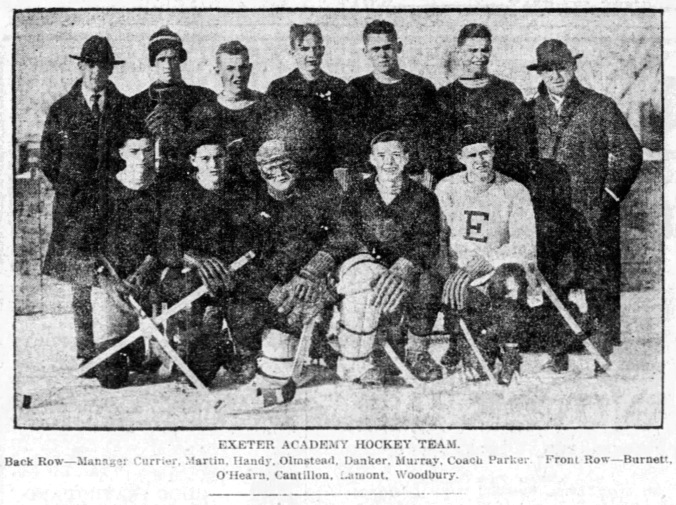 School Days: The Exeter Academy team from the winter of 1920, featuring goaltender Bill Cantillion and his glass-protectors.

Having ventured to wonder earlier in the week that this might be the earliest known photograph of a hockey mask, I’m back today knowing that … it’s not.

That’s the proof, above, on the face of Bill Cantillion, the captain and star goaltender for Exeter Academy, the august New Hampshire independent school, who’s posed here with his teammates in the winter in 1920 wearing an apparatus that, even in this fairly murky image, looks almost identical to E.W. Gould’s get-up from Thursday’s post.

Cantillion, I can report, was a son of Joe Cantillion, the Major League Baseball manager and umpire. The Exeter team the younger Cantillion played on 1920-21 was a good one: in February, they overcame the previously unbeaten Harvard freshman team by a score of 3-1. On the defence for Harvard: George Owen, a future captain of the Boston Bruins. Bill Cantillion himself would attend Harvard, where he played hockey and baseball … maybe with his mask? I haven’t found a photograph of that. In the mid-’20s he played for the Los Angeles Monarchs of the amateur Pacific Hockey League.

I guess we can surmise, then, that E.W. Gould’s mask wasn’t one that he pioneered. Also (almost definitely) that Bill Cantillion wasn’t the first to wear this half-face model. I’m guessing that these rudimentary masks were common up and down the U.S. east coast, on high-school and college rinks as well as on basketball courts and football fields.

Gould isn’t shown wearing glasses, but (I’m fairly confident) Cantillion is, and I think that was the original point: these rudimentary masks were manufactured to safeguard spectacles in the sporting rough. If they are masks. Can they, in the specific context of the evolution of hockey protection, be considered in same conversation as, say, the custom-made tackle that Clint Benedict wore in 1930? I’d say they can, but not everybody thinks so: hockey historian (and president of the Society for International Hockey Research) Fred Addis holds that the glasses-protectors we’re talking about here belong in a separate category.

Either way, they do seem to have been popular, particularly on New England rinks, and show up more and more in photographs as we get into the 1930s.

While NHL goaltenders continued bare-faced through the 1920s, goaltenders in lesser leagues were resorting to the fuller fortification of a baseball catcher’s mask in these earlier years, often on a temporary basis: Iver Anderson, for instance, who played for the USAHA Duluth Hornets, donned one in February of 1922 for a game against the Cleveland Indians after having had several teeth knocked out in an earlier contest.

A few months earlier, in December of 1921, the Canadian Amateur Hockey Association had stepped up to try to aid the health and well-being of goaltenders by adding a goal crease to the rules of its rinks. (The NHL didn’t follow suit until the 1933-34 season.)

A further 1921 amendment permitted a goaltender to wear a mask, “to protect his face and head.”

This was at least partly in response to the tragedy of a 23-year-old amateur goaltender, Edgar Hawthorne, who was struck in the temple by a puck in January of 1921 during a game in Toronto and died of a blood-clot the following day.

Checking in a few months after this last new CAHA rule took effect, the Globe found that in Ontario it appeared “to be a useless provision, and unpopular, to say the least.”

Few, if any, goalkeepers have availed themselves of the privilege of equipping themselves with ‘bird cages.’ Referees throughout the Province report an utter absence of the paraphernalia in league games.”

Hawthorne’s case was a terrible accident, the consensus seemed to be; it had more to do with poor lighting in the arena in question than with any lack of a face-guard.

“Goalkeepers prefer not to have their vision hampered by the use of masks,” the Globe concluded. Of a recently introduced papier-mâché baseball catcher’s mask with wider eye-openings, the Globe reported:

The new mask is light, strong and easy to see through, but, as the fashion gazettes are wont to remark, “are not being worn.”

I’ll assume that the glass-protectors of the sort that Gould and Cantillion were sporting were available in Canada, too, in the 1920s, though the earliest visual evidence I’ve come across showing they were in use in the north are from the 1930s. Roy Musgrove had a set when he was guarding goals for the University of Manitoba in 1930-31. (And wore them in England, too, later in the ’30s, playing for the Wembley Lions.)

In 1933, you could order a pair for from the Harold A. Wilson sporting goods company in Toronto, for $3.10 delivered: “carbon steel wire, electro welded, outside wires are padded and covered with leather,” the catalogue promised.

Shop Now: On sale in Toronto in the winter of 1933-34, as per Wilson’s Winter Sports Catalogue, Number 115. (Image courtesy of Fred Addis)

That’s all (for now). Well, one more update: thanks to another diligent member of SIHR, Connor Mah, we know that E.W. Gould was Edward Wanton Gould, Princeton class of ’22. Born in Staten Island, he was schooled as a boy at hockey hotbed of St. Paul’s in New Hampshire, which maintains a claim as the site of the first organized hockey in the U.S. (in 1870) and was Hobey Baker’s alma mater. Ed Gould went into the oil business in New England after he left Princeton. A memorial following his death in 1978 noted that he continued his interest in swimming and skating throughout his life — and that he was also interest in horticulture.