Big win for Erik Källgren the other night, great that the 25-year-old Swedish rookie volunteered himself as the missing piece that completes the puzzle that is the Toronto Maple Leafs’ goaltending situation, good night, good luck, see you in the Stanley Cup final.

Too much, too soon? Probably. No sense in getting ahead of ourselves, or the Leafs, maybe let’s just pause in the moment and say that Källgren looked good in his first NHL start as he made 35 saves to secure Toronto’s 4-0 home win over the Dallas Stars, careful, craftful, calm when he needed to be, hasty when haste was called for, agile, pliant, just lucky enough. He shouldn’t have had to explain himself once his work was done, but of course he was asked to, because that’s what TV demands.

“Ah, I mean,” Källgren gamely told TSN’s Mark Masters, “it’s a lot to take in right now, but obviously I’m really happy, and happy for the win, and how the guys played in front of me was unreal. So a lot of emotions right now but of course very happy.”

Gladdening the hearts of fans of historical significance, the NHL was quick to chime in on the evening’s historical resonances. This was the 100th regular-season win of Toronto coach Sheldon Keefe’s tenure, in his 163rd game behind the bench, which makes him the quickest Leaf to that milestone: Pat Quinn and Dick Irvin each took 184 games to reach 100 wins.

The NHL also tagged Källgren’s performance as the fourth in club history in which a Leaf goaltender had earned a shutout in his first game as a starter: 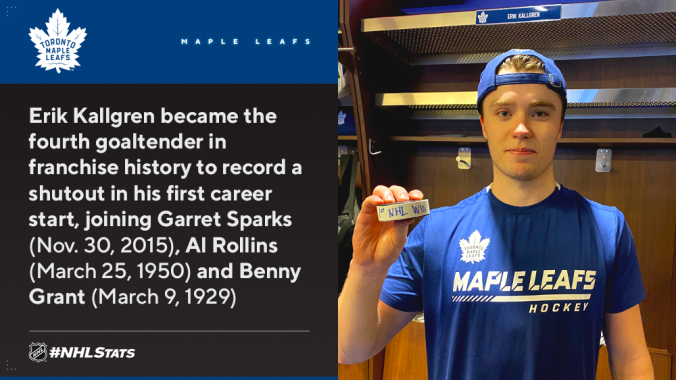 Notable. Sorry to say that that infographic is only partly true. Fans of historical nitpickery soon discovered that, with minimal due diligence. When it comes to Benny Grant, the actual fact of what happened in 1929 is stranger and altogether more interesting than the version the NHL boxed up this week for social media.

Benny Grant hailed from Owen Sound, up on the Georgian Bay shore. In 1927, he helped the Owen Sound Greys win the Memorial Cup, Canada’s junior championship. After a year with Bert Corbeau’s Canadian Professional Hockey League London Panthers, he signed with the Maple Leafs, where Conn Smythe was coach and manager, and another Owen Sounder, Hap Day, was the captain.

Grant was 20 years in the fall of 1928. Not every NHL team employed a back-up goaltender in those years, but Toronto did, maybe because the man slated to start for the Leafs that year was coming off a grievous injury that had almost cost him an eye in the previous spring’s playoffs. After two years with the Rangers, Lorne Chabot, 28, had arrived in Toronto in an exchange that sent John Ross Roach and $10,000 to New York.

Chabot’s health wasn’t a worry, though, as it turned out: he was fine. He ended up playing in every one of the Leafs’ regular-season games that season, along with all four playoff games. When Grant saw action, it was almost always in relief: he appeared in five games through the season (none in the playoffs).

In Chabot’s case, NHL records only have him playing 43 games through the 1928-29 regular season. Most other standard hockey references say the same. (The Society for International Hockey Research, in its wisdom, does credit Chabot with his full and rightful 44 games.)

A sliver of an oversight, yes? Maybe so.

Still, significant enough that it shifts the meaning of the very record that the NHL claimed last night for Benny Grant. The game that Chabot played that the NHL is missing is the one on Saturday, March 9, 1929 — Benny Grant’s first NHL start (against the Detroit Cougars), when he’s supposed to have recorded his first NHL shutout. But Chabot played in that game, too, so he shared in the effort to deny the Detroit Cougars a goal. Benny Grant’s first start, as it turns out, wasn’t quite the same as Erik Källgren’s week: in 1929, Grant had help. Should he get credit for in the record books? It’s not up to me to add or subtract official shutouts, but I will note that the same situation occurred five days later that March, with Chabot and Grant combining to blank the New York Americans, and neither one of them is credited in the official records as having recorded a shutout.

Got that? It’s all very arcane … as statistics are. Here’s where the story of Benny Grant’s NHL debut gets interesting, and a little strange. Unheralded as it is, that night at Toronto’s Arena Gardens is notable for a tactical innovation that Conn Smythe seems to have introduced that night.

Unless, of course, the Leafs were just fooling around, having some fun as the season wound down before the playoffs.

Toronto was in: with just four games remaining in the regular schedule, there was no danger, by then, of the Montreal Maroons catching them in the standings. Toronto’s first-round opponent, in fact, would be the same Detroit Cougars they were meeting on March 9.

Time (I guess) for the Leafs to cut loose, just a little.

As has been noted before, Dick Irvin experimented with the idea of platooning goaltenders when he was coaching the Montreal Canadiens at the end of the NHL’s 1940-41 season. That was in March, too, with the end of the season in sight. Goaltenders worked hard, wore heavy pads, and like everybody else, they tired: why not, Irvin wondered, dress a pair of goaltenders and shift them on and off just like regular skaters?

“If we’d had an extra goalie,” he mused after a Canadiens loss in New York to the Rangers, “we might have used him along with the regular goalie in an effort to improve the situation. Those Rangers really were boring in and sure kept little Wilf Cude busy.”

Later that month, in Montreal’s final regular-season game, Irvin gave it a go. With the New York Americans visiting the Forum, Bert Gardiner started the game in the Canadiens’ net, with Paul Bibeault replacing him halfway through. The experiment was a success, I suppose, unless you’re a stickler for stats: though Montreal won 6-0, the NHL seems to have been unable to compute the shared shutout, so while Gardiner got the win, neither goaltender was credited with a shutout.

Twelve years earlier, lining up against Detroit in March of 1929, Conn Smythe’s version of doubling up his goaltenders added a fun twist — he “introduced another of his popular innovations,” as the Toronto Daily Star framed it. With a line-up of 12 players at his disposal, Smythe “used two complete teams and changed them completely every five minutes. The teams were known as the married men’s team and the single men’s team ….”

Bachelor Benny Grant go the start: he and Phyllis Banks wouldn’t marry until 1934. In front of him Grant hadHap Day and Red Horner on defence and a front line of Danny Cox, Andy Blair, and Ace Bailey. Marital status wasn’t so strictly enforced: Cox was married, while in the connubial substitute line-up of Chabot in goal, Arts Duncan and Smith on d, and Shorty Horne, Baldy Cotton, and Eric Pettinger at forward, Smith and Horne were single men. (Chabot, for the record, had married Elizabeth Money in 1927.)

Again, the two shifts operated as complete units: “When substitutions were made,” the Globe noted, “all six players left the ice and the other six replaced them.” 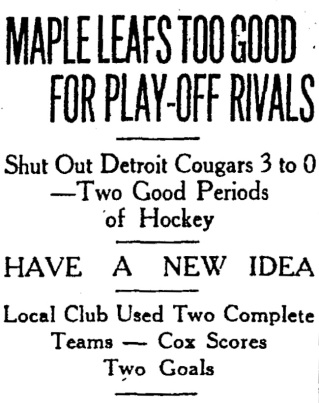 According to the Star, the Leafs made it even more interesting for themselves. “It was agreed before the game that the squad scoring [sic] most goals should be provided with new hats and it remained for a married man to help out the single men’s cause as Danny Cox, assisted by Andy Blair, got two of the goals. The other one, secured for the married men, went to Shorty Horne assisted by Harold Cotton.

And so the Leafs prevailed, 3-0. Grant had relieved Chabot earlier in the season in a game in New York against the Americans, but this was his outing on Toronto ice. “He upheld his end nobly,” the Star judged. “As a matter of fact he had a great deal more work to do than Chabot, the regular goalie.”

So much so, it seems, that Chabot’s contribution was ignored entirely by whoever was keeping records for the NHL. To this date, while the official online boxscore includes Chabot in Toronto’s line-up, it credits Grant with having played all 60 minutes of the game and collecting the win and the shutout.

What happened? Who knows. With the goaltenders switching out every five minutes, maybe it was just too much bother to keep track of them on the night. Even so, Chabot does deserve credit for his involvement in the game and (I’d argue) a share of the shutout that’s on Benny Grant’s record.

Chabot and Grant continued to share Toronto’s net for the rest of the regular season: in all three of Toronto’s three remaining games, Smythe used both goaltenders as the Leafs went 1-2 to finish the season, though it doesn’t seem that Smythe shifted his netminders quite so aggressively in these games. Records for all three of these games reflect the participation of both, even if (as mentioned) the shutout Grant and Chabot crafted in the penultimate game, a 5-0 home win over the Americans, was credited to neither man.

Former Toronto owner/coach/manager Charlie Querrie was writing a popular column in the Star in 1929. As he saw it, Smythe’s hasty goaling shifts were all for the show. “It is hard to create excitement,” he wrote, “with nothing at stake, but the Leafs did all they could to please the spectators, and the evening was worthwhile. It showed that the Leafs have plenty of good material and a round dozen players who can give a good account of themselves.”

As for the hats, the Globe’s Bert Perry delivered the goods on those. “The Maple Leafs will flash some Easter millinery this week,” he duly reported on the Monday following the Detroit win. That is, all the players got new hats, courtesy of management. “Ace Bailey,” he jibed, “will now be able to turn in his 1925 model for something modern.” The deal, Perry said, was that if the Leafs had lost to Detroit, the players would have been buying headgear for the team’s directors.

“Despite their recent successes,” Perry concluded, “the hat sizes of the Leafs have not changed since last fall. A more unassuming aggregation of athletes would be hard to find.”