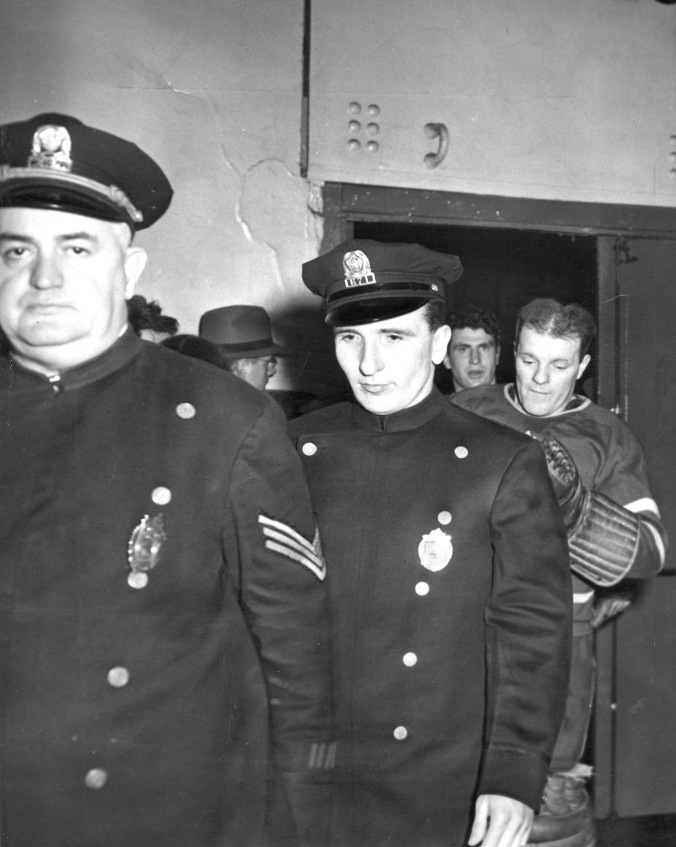 Boston’s Brave: Maple Leaf goaltender Turk Broda makes his way to the ice at Boston Garden on the night of Thursday, April 1, 1948, with teammate Vic Lynn following behind. Boston Police doubled their presence at the Garden on this night for the fourth game of the Bruins/Leafs Stanley Cup semi-final after a violent end to game three on March 30.

In the long fierceness that is the rivalry between the Boston Bruins and the Toronto Maple Leafs, the Boston leg of the Stanley Cup semi-final in which the two teams met in the spring of 1948 stands on its obstreperous own.

The Leafs had won the first two games at home. They were the defending Cup champions that year, featuring a stacked line-up that included the sublime talents of Ted Kennedy, Max Bentley, and Syl Apps, and they continued their dominance when the teams moved to Boston, beating the Bruins 5-1 at the Garden on the Tuesday night of March 30 to take a stranglehold on the best-of-seven series.

Boston didn’t go quietly that night, though. The game was an ill-tempered one throughout: “stormy” was the word the local Globe used to describe it.

For instance: when, early on, Milt Schmidt  and Fern Flaman pinned Bill Barilko to the boards, a spectator leaned over to punch the Leaf defenceman. (Referee Georges Gravel did his best to see the fan ejected from the arena, in vain.)

For instance: a late-game jam between the Leafs’ Harry Watson and Boston’s Murray Henderson ended with a broken nose for the latter.

For instance: as the teams were departing the ice at the end of the game, another fan swung a fist at Leaf coach Hap Day.

That was how the Boston press framed it, anyway. Jim Vipond of Toronto’s Globe and Mail had a more nuanced account, alleging that two fans near the Toronto bench were heckling Day throughout the game, “repeatedly calling him ‘yellow.’” Vipond noted that Gravel tried to have this pair removed, too, but Bruins’ president Weston Adams “dashed to the side of the rink and refused to let the police interfere.”

When the game ended, one of these same agitators seized Day’s hat, a light-tan fedora. Other fans joined in, and Toronto defenceman Wally Stanowski came to his coach’s aid, followed by Ted Kennedy, assistant trainer Cliff Keyland, and defenceman Garth Boesch. The fracas spilled on to the ice; general tussling ensued; Boesch was punched in the face; linesman George Hayes and several policemen helped to restore the peace.

Day’s hat was lost, Vipond reported, and Boesch was dazed: he “had to be taken back to the hotel and put to bed.”

The Leafs were, understandably, outraged, but then so were many on the Boston side of things. Boston Globe columnist Herb Ralby went to the Leaf dressing room to apologize. Weston Adams went, too, but Leaf president Conn Smythe pushed him out before a pair of Boston policemen intervened.

“That was a disgraceful occurrence,” Bruins’ captain Milt Schmidt told Red Burnett of the Toronto Star. “They’ll have to do something to curb those morons,” said his teammate Jack Crawford. “The police should step in and chase them before they can molest visiting players. We don’t receive that kind of treatment in Toronto.”

Mrs. Crawford agreed. “That’s the worst piece of sportsmanship I’ve ever seen,” she said. “The better team won and that’s all there should be to it.”

There was more, though. The following day, as the teams prepared to resume their series, a Boston judge issued arrest warrants for linesman George Hayes and King Clancy, who’d been at the game as back-up referee. They stood accused of assaulting a fan by the name of Ed Shallow, an employee of Boston’s housing authority.

Shallow, it seems, had gone after Georges Gravel in the March 30 melee. According to his complaint, Clancy had “grabbed Shallow by the seat of his trousers and hustled into the officials’ room. Inside the room, Clancy and Hayes are alleged to have manhandled Shallow, whose glasses were smashed.”

No fooling: Clancy and Hayes appeared in court on the morning of April 1, with Clancy testifying that he didn’t know how Shallow ended up in the referees’ room, but that no-one had touched him there. Judge Charles Carr acquitted the officials; the assault, he said, was not proved beyond a reasonable doubt. He had strong words nevertheless for Clancy: “I am absolutely certain you are not telling the truth,” Judge Carr told him.

Clancy and Hayes both worked the game that night. The Bruins pulled out a 3-2 win to send the series back to Toronto in what was a relatively peaceful encounter. “The teams tended strictly to their knitting,” Herb Ralby wrote in the Globe. King Clancy, he reported, ruled with an iron hand, “stopping all disturbances in the first period and from there on, the teams just concentrated on hockey.”

Security, he noted, had been stepped up. “There were so many policemen in the rink, it might have been misconstrued as the policemen’s ball.”

“We’ll do everything in our power to protect the visiting players,” said Garden president Walter Brown, “and to prevent a good sport like hockey from being ruined. Anybody who does anything wrong will go right out. Honestly, I can’t understand what’s come over Boston fans to act in the rowdyish way they have this year.”

Bruins’ games were normally policed by 20 patrolmen at this time; on this night, the crowd of some 13,000 was swelled by 50 Boston policemen, three sergeants, and a lieutenant, along with 12 Boston Garden security officers.

Back in Toronto two days later, the Leafs closed out the series with a 3-2 win of their own. Later in April, they went on to beat the Detroit Red Wings in a four-game sweep to take their second consecutive Stanley Cup championship.