Jim Pappin scored the decisive goal in a 3-1 win, and Terry Sawchuk was the Toronto goaltender on a Tuesday of this date in 1967 when the Maple Leafs clinched their last (most recent?) Stanley Cup by overthrowing the Montreal Canadiens in six games. Punch Imlach’s underdog gaggle of Leafs included a couple of 40-year-olds in Johnny Bower and Allan Stanley, as well as 39-year-old Red Kelly; Sawchuk and captain George Armstrong were 36. That’s a mammoth Armstrong above, of course, looming over the faithful in the wake of a previous Leafs’ championship, in 1963. The soggy scene below does date to what happened, back in the dressing room at Maple Leaf Gardens, after the Leafs won on this night 53 years ago. That’s Bower bared with 21-year-old Toronto winger Ron Ellis and assistant manager King Clancy, who was 64. Clancy had been seeing Stanley Cups for a while at this point: he won his first, as a defenceman for the original Ottawa Senators, at the end of March of 1923. He helped the Senators win another in 1927 and was part of a third championship team when he played for the Leafs in 1932. 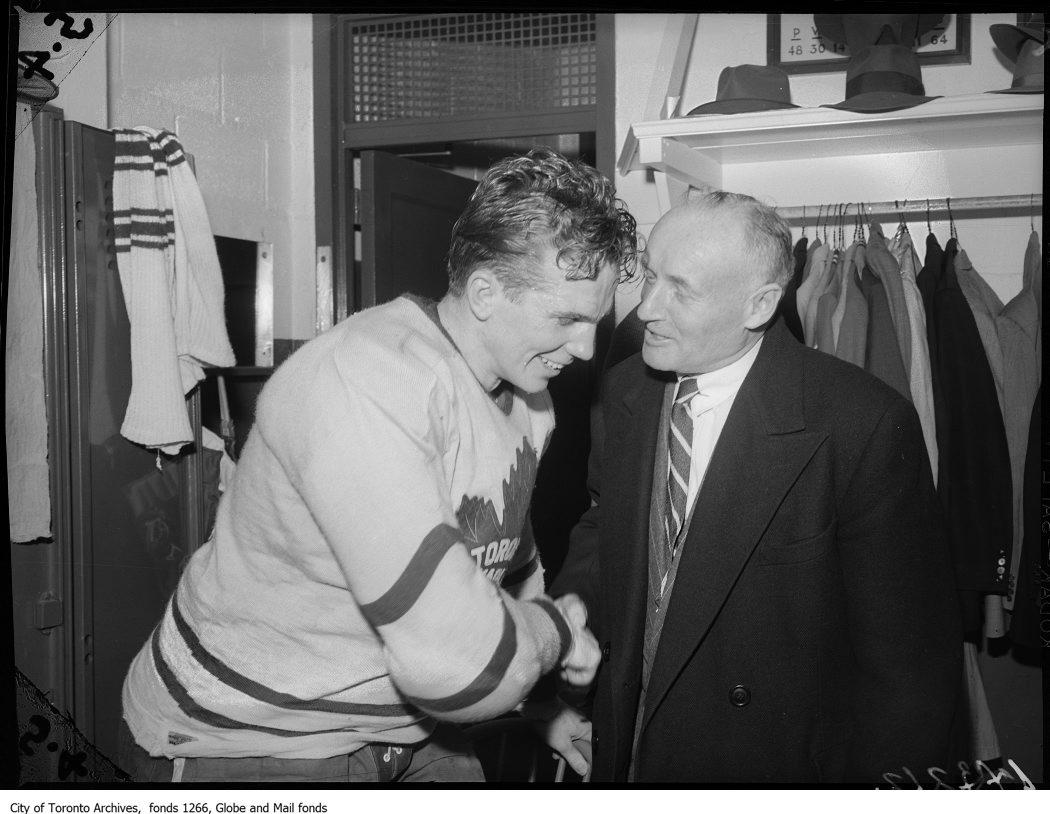 Hero Of (Another) OT: Bill Barilko scored his famous goal on this date in 1951 to secure the 3-2 victory for his Toronto Maple Leafs. The Leafs claimed their ninth Stanley Cup that night, surpassing the Montreal Canadiens by four games to one in the series. That’s the hero here, post-game at Maple Leaf Gardens, congratulated by delighted Leafs’ bossman Conn Smythe. (Image: City of Toronto Archives, Fonds 1266, Item 143212) 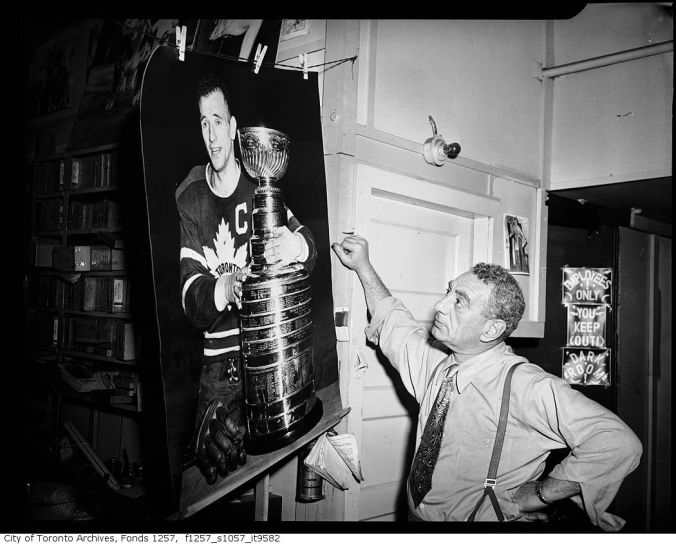 Freeze Frame: It was on a Saturday of this date in 1947 that the Toronto Maple Leafs won their sixth Stanley Cup, dethroning the Montreal Canadiens with a 2-1 win at Maple Leaf Gardens to take the best-of-seven finals 4-2. Syl Apps was the Leaf captain, 73 years ago, while Ted Kennedy was the one to score the deciding goal. Two years later, Kennedy skippered the Leafs to their third consecutive Cup. That’s him here, after the ’49 championship, gazed upon in-studio by legendary photographer Nat Turofsky. (Image: City of Toronto Archives, Fonds 1257, Series 1057, Item 9582) 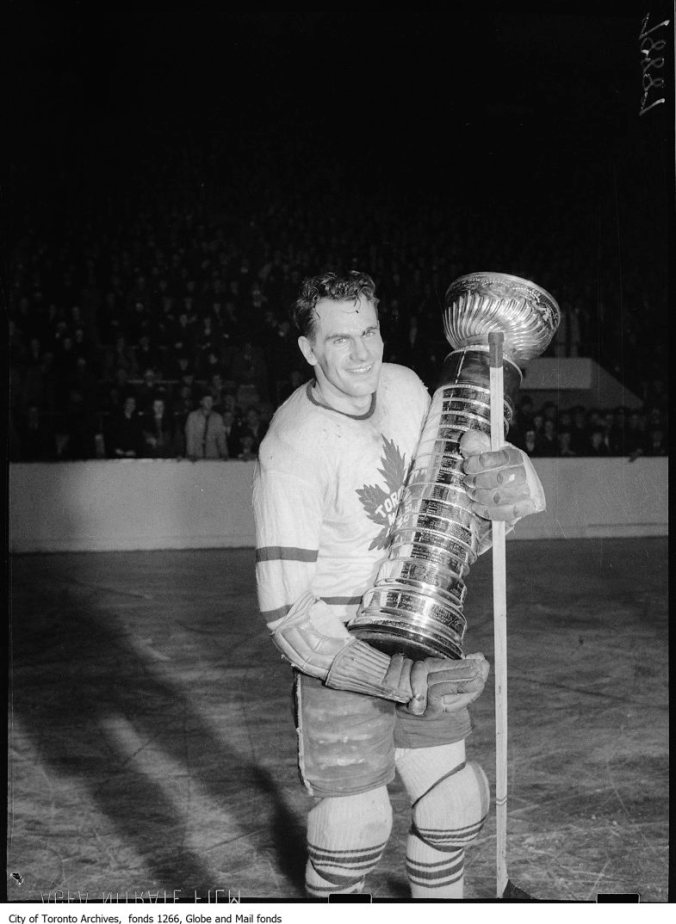 Comeback Kids: It was on a Saturday night of this date in 1942 — all those 78 years ago — that the Toronto Maple Leafs capsized the Detroit Red Wings to win the Stanley Cup in seven games. Pete Langelle’s goal was the winner on April 18, a 3-1 affair at Maple Leaf Gardens that capped as famous a playoff turnaround as you’ll find: after losing the first three games of the series, the Leafs roared back to win four straight. Captain Syl Apps, seen here with hefting his championship luggage, was pleased, as was Leafs’ panjandrum Conn Smythe, who rewarded his players with ten-karat golden coins —winger Hank Goldup’s is here below — that would get them in the door at the Gardens for the rest of their lives. 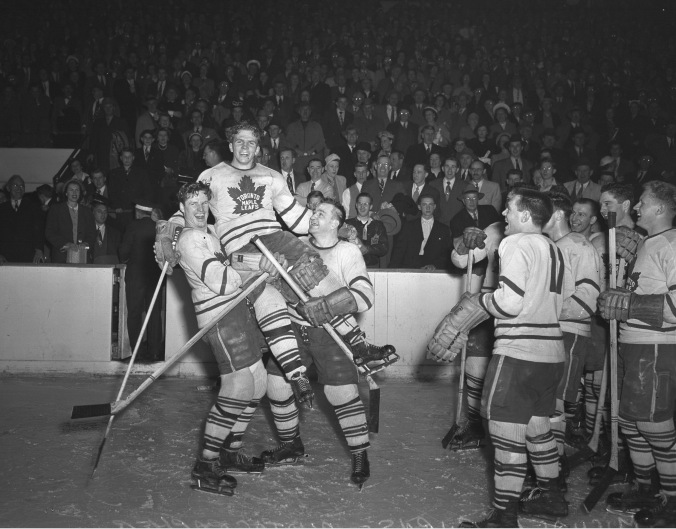 North Star: March 25 was a Friday in 1927, the day that iconic Toronto Maple Leafs defenceman Bill Barilko was born in Timmins, Ontario. He played just five NHL seasons before he scored the goal that Gord Downie would come to immortalize in song, beating Montreal goaltender Gerry McNeil in overtime on Saturday, April 21, 1951 to win the Leafs their ninth Stanley Cup. Barilko died later that summer in a plane crash. He was 24. Hoisting the hero in the moments following his heroics are Leafs (left) Cal Gardner and Bill Juzda. To their right, that’s Howie Meeker alongside Ray Timgren, whose stick partly obscures … Jimmy Thomson? Joe Klukay is farthest to the back.

(Image: Michael Burns, from A Century of NHL Memories: Rare Photos from the Hockey Hall of Fame, used with permission) 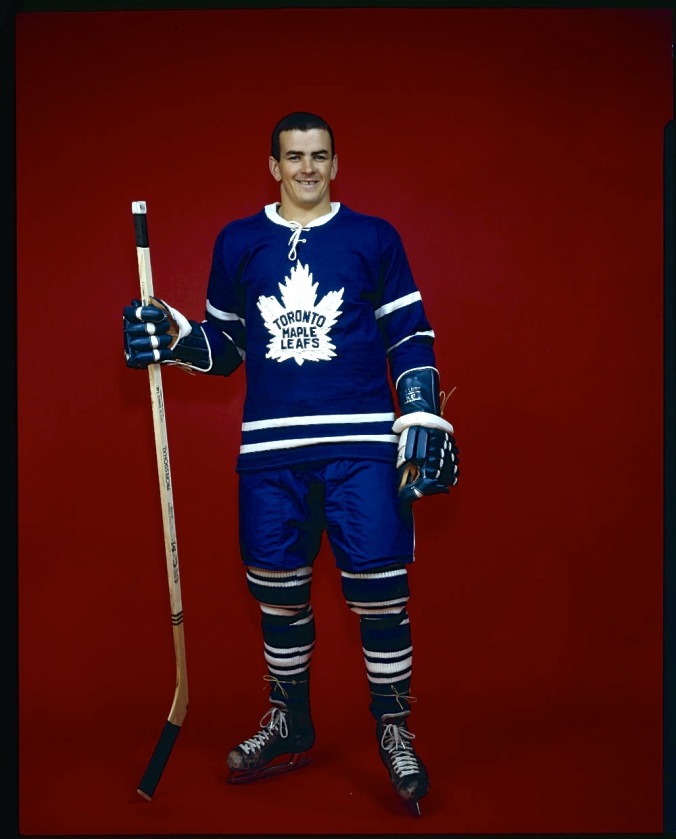 Leaf Leader: Born in Noranda, Quebec, on a Friday of this date in 1940, Dave Keon, who turns 80 today, was recognized in 2017 as the greatest ever of all Toronto Maple Leafs. His statue guards the approach to the Leafs’ modern-day home at the Scotiabank Arena, wherein the number he wore on his sweater, 14, is draped up in honour amid the rafters. Keon won the Calder Memorial Trophy as the NHL’s top rookie in 1961, the year this portrait was posed, and his personal trophy case gained Lady Byngs in 1962 and ’63 as well as a Conn Smythe in ’67. He won four Stanley Cups during his Leaf tenure. Dave Keon was inducted into the Hockey Hall of Fame in 1986. (Image: Louis Jaques/Library and Archives Canada/e002343743) 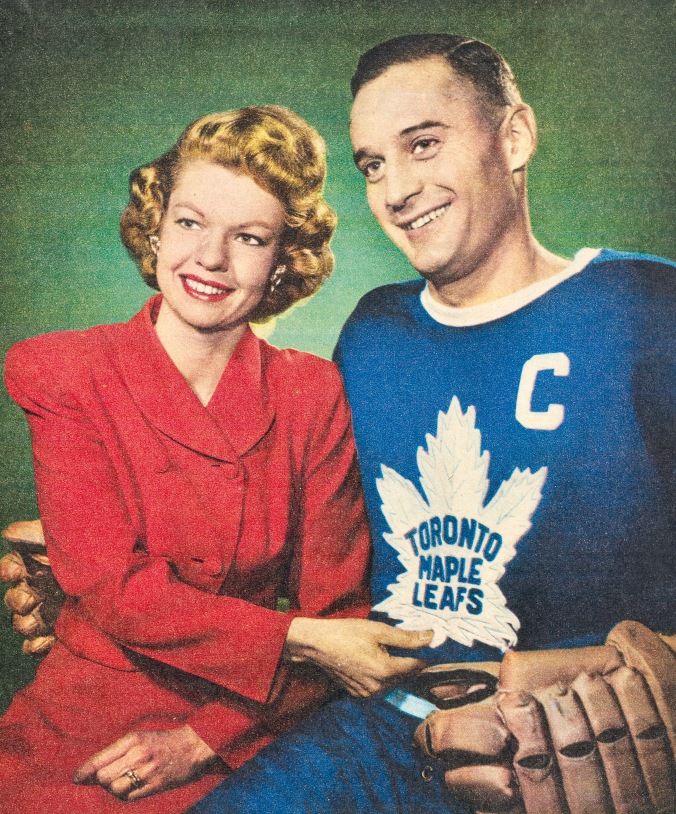 Born in Winnipeg on a Wednesday of this date in 1927, Jim Thomson was starting his 12thseason working the Toronto Maple Leafs blueline when he was named captain of the team in the fall of 1956. At 30, he was a four-time Stanley Cup-winner by then, and twice he’d been named to the NHL’s Second All-Star Team. Coach Howie Meeker recommended his promotion to the captaincy ahead of the new season, succeeding Sid Smith. “This being a young team,” Meeker wrote to Leafs’ supremo Conn Smythe, “I think more than ever we should have a captain who can set an example on and off the ice for the kids.” Thomson had proved himself to be the Leafs’ best defenceman at training camp, the coach continued. And: “He is the only one of the possible captain candidates working for the honour on and off the ice.”

And so it was that Thomson, pictured here with his wife, June, proudly showing off his C’d sweater, took up as the Leafs’ on-ice leader. The season, unfortunately, didn’t go so well: the team stumbled from the start, and ended up out of the playoffs. By time it was all over, Smythe had accepted responsibility for what he called “a year of failure” — while summarily axing Meeker and long-serving GM Hap Day. As for Thomson, he signed on during the season as secretary for and Leafs’ representative to Ted Lindsay’s fledgling players’ association. When the players went public in February of 1957, Thomson soon found out what his boss thought of the whole business. Benched and stripped of his captaincy, Thomson was soon sold into exile, joining Lindsay and others on the NHL’s island of Broken Toys, a.k.a. the Chicago Black Hawks. “I find it very difficult to imagine,” Smythe railed, “that the captain of my club should find time during the hockey season to influence young hockey players to join an association that has no specific plans to benefit or improve hockey.”