Montreal’s well-thewed Swedish defenceman Douglas Murray played in Games 3, 4, 5 of the Canadiens’ series against Boston before coach Michel Therrien replaced him in last night’s Game 6 with a fleetly footed rookie, Nathan Beaulieu. Murray, 34, stands 6’3” and weighs in at 245 pounds. No P.K. Subban, Murray has never really been known for quickness in his nine NHL seasons, or scoring, or on-ice charisma or … well, anyway. The point is, he couldn’t dodge the attention, statistical and otherwise, of the Twitterati while he was in the line-up. A sampling from the shallow end of the (mostly) derision, along with testimony from the coach and the witness himself:

Douglas Murray is in the lineup for Montreal, which is like adding a boat anchor to the ol’ chariot

Douglas Murray trapped in amber in his own zone

Douglas Murray looks like Kirstie Alley on the second flight of stairs.

When Douglas Murray is as gassed as he was on that last shift, he actually travels backwards in time. ‪#mtlhockey

Douglas Murray’s competition and zone starts have gotten easier since 11-12. His possession stats has been consistent

Douglas Murray’s Corsi For through 60 minutes? 6.7 per cent.

Douglas Murray smushes Shawn Thornton, which is not unlike getting smushed by a glacier

Can any move up-ice that incorporates Douglas Murray actually be called a rush?

When Douglas Murray skates by, there’s an eclipse ‪#Habs

Never mind that Murray singlehandedly caused the game winning goal by 1) Not knowing where the puck was, 2) Being way out of position, and 3) Losing a battle to a player playing his first ever NHL playoff game, even without that, he hurts the Canadiens every time he takes the ice.

Nathan Beaulieu over Douglas Murray is like replacing your ’88 Civic with a Porsche 911. 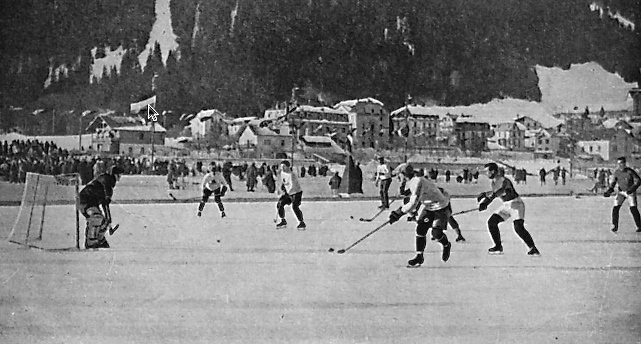 Mercy Rule: Canada opened the 1924 Winter Olympics in Chamonix, in France, with three games in three days, beating Czechoslovakia, Sweden, Switzerland by a combined score of 85-0. Represented by Toronto’s Granites, Canada featured Harry Watson (he scored 37 goals in six games) and Hooley Smith (playing at left defense rather than more forwardly, as he tended to do, later, in the NHL). The Canadians — spoiler alert — went on to win the gold.

The Swedes — pictured here, above, in the dark sweaters — kept it close, sort of. The weather had been Black-Sea balmy, but a snowstorm briefly blinded the game during the first-period, which ended with Canada ahead by 5-0. In the second, Sweden’s goalkeeper got a warning from the American referee for dropping to his knees. Soon after that, the goalie, Ohlsen, stopped a shot from Canada’s captain, Dunc Munro, with his forehead. The players paused, as you’d hope they would, and Ohlson woke up after three minutes. Watson scored just twice on the secondary Swedish goalie before Ohlson returned near the end of the middle period. Brave man. To honour his pluck, Beattie Ramsey put two quick goals past him.

The Canadians took it easy in the third, reported the correspondent from Toronto’s Daily Star. It was during “a spell of loafing” that Holmkvist, the Swedish captain, almost got his team a goal. It was threat enough that the ever vigilant Ramsey woke up and scored for Canada, goading his teammate Smith to immediately add two more goals.

Next, well — we just couldn’t help ourselves, could we? 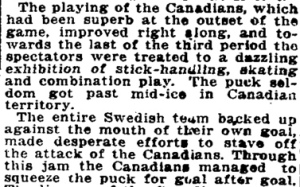