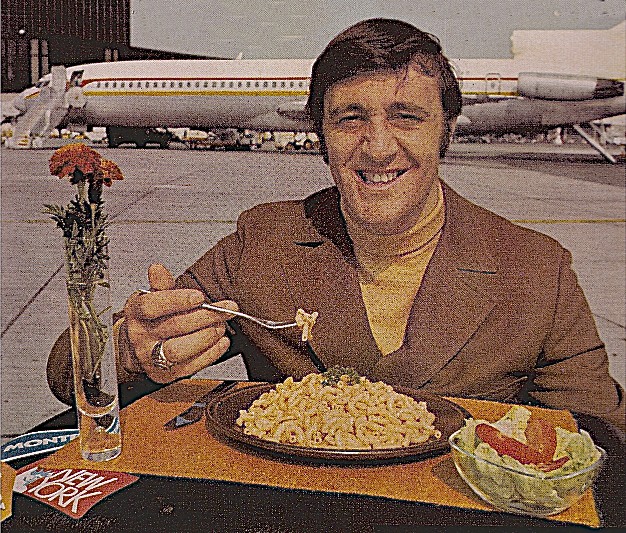 Call It Macaroni: Trades made Phil Esposito depressed and angry. Here, in happier times, he makes the case for Kraft Dinner at the airport. Out on the tarmac. With a side salad.

Brett Hull grinned when he was traded from Calgary to St. Louis in 1988. “Yesssssss,” he said, and I quote. A few months later and a little to the north, Wayne Gretzky departed for Los Angeles amid a storm of shock and tears, anger and accusations. That, the latter, is probably closer to the norm when it comes to what hockey players go through when they’re swapped, one team to another. A lot of the time they feel what Arnie Brown felt when the New York Rangers sent him to Detroit in 1971: “depressed, bitter, and shocked.”

Dave Schultz was dazed. His head felt heavy. He never thought it would come to this. Traded for draft choices! This was in 1976 when Philadelphia sent him south to do his hammering in L.A. He was angry. He blamed Bobby Clarke. After all he’d done for the Flyers in the way of punching their opponents! Not to mention them punching him! Humiliating. He said some things, which a reporter heard and published. There was a furor. “It’s dislocation pure and simple — and rejection,” he’d wax later. “You don’t think that someone else wants you; you think that somebody doesn’t.” END_OF_DOCUMENT_TOKEN_TO_BE_REPLACED

It’s good to have a dad. If you don’t have one there’s no way you can make pro. That’s too bad but that’s just the way it is.
Pete McCormack, Understanding Ken (1998)

Hockey fathers are titans, if you read back into the game’s histories and its biographies and memoirs, that’s what you find, the fathers are like characters from folklore. They have bear-paw hands[1] and their strength earns them the nickname Magilla Gorilla.[2] If they felt like it, they could trace their ancestry back to the Duke of Rutland.[3]

They’re painters and five-foot-one butchers. [4] They’re tinsmiths with the MacDonald Sheet Metal Company in Winnipeg, as strong as an ox, and one day they knock a man down, one punch, at the corner of Selkirk and MacGregor, and then the man’s pal comes along, name of China Pete, and studies the downed man and says it’s Harry Dillon, the light heavyweight boxing champion.[5] Or else they work for the CNR in Lucknow, Ontario, in the wintertime, where they singlehandedly lift back onto the road a car that has skidded off. Once, on a dare, they hoist a 600-pound salt barrel onto a scale.[6] They’re excellent swimmers, and compete in three Olympics: 1968, 1972, 1976.[7] At one point they own a Coca-Cola franchise and then a Kuntz’s Brewery franchise out of Waterloo, Ontario. They have two big Geoffesson trucks.[8] They’re pleasant-looking men – five-foot-eight with brown hair, grey eyes, and head tilted at a jaunty angle to the right. Nobody wants to embarrass them, so they never ask the reason for the jaunty tilt.[9] They have no affinity for Americans. If they’re driving from Ontario to Saskatchewan in the summertime, even though it would make for a shorter trip, they refuse to travel through the United States.[10] One of their hobbies was mice.[11] They’re maintenance men at a textile factory in Ruzomberok.[12] They’re machinists in the Angus Shops of the Canadian Pacific Railway in east-end Montreal,[13] and also they’re bakers in Chicoutimi.[14] During the years when their son George is captain of the Maple Leafs, they work in Sudbury’s mines for Falconbridge and if a co-worker abuses Toronto, the fathers of hockey players piss on the heads of the abusers as they come up in a cage from underground.[15] END_OF_DOCUMENT_TOKEN_TO_BE_REPLACED