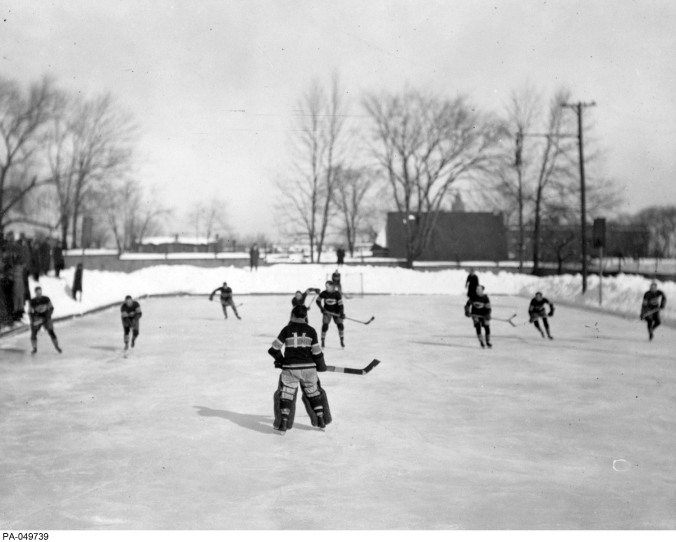 The Montreal Canadiens took to the ice at Verdun in January of 1924 for practice: here they are There’s not a whole lot more I can tell you about this photograph with any certainty. That’s Georges Vézina away down in the far net. And the near? Hard to say. Canadiens’ manager Leo Dandurand did sign a new goaltender that year, but not until October: Eugene Decosse, 25, was seen as an understudy and heir to Vézina, who was 37. (As it turned out, Decosse never played an NHL game.) So maybe is it right winger Billy Cameron? He wore number 11 that year, and it’s possible that he donned the pads in Verdun. I’m betting that the tall figure in front of him is captain Sprague Cleghorn. Based on the distinctive hairline, I’d guess that Billy Coutu is the man to his left. Otherwise — I don’t know. Sylvio Mantha is out there, and probably Sprague’s brother Odie, which is a pleasing phrase to say aloud, so here it is again: Sprague’s brother Odie. Could be a coated Dandurand, who also coached the team, off in the far corner, maybe? Is that a capped Aurèle Joliat skating up from the back — or is he bareheaded out on the extreme left? And next to that guy — possibly Howie Morenz, in his first season with Montreal, carrying the puck? The great Joe Malone played his last NHL hockey that year with Montreal, so he could be out there, too.

The record does show that Canadiens had a tough go of it in January of ’24. They would, just a few months later, win the NHL title, which they followed up by beating the WCHL’s Calgary Tigers to take the Stanley Cup.

But to start the year they went 3-7. Billy Coutu broke his wrist that month, and in a game against the Ottawa Senators at the Forum, Montreal’s Gazette noted that Vézina “looked a little off-colour, and caused a little apprehension among Canadiens supporters.” In Hamilton, during a 4-0 loss to the local Tigers, Canadiens’ winger Billy Boucher struck a spectator with his stick. “It might have been an accident,” the Gazettegenerously offers; “fans ran at him from all corners of the rink, but Cleghorn and a few more Montreal players barred the way to the dressing room until Boucher was safe behind locked doors.” They lost a subsequent game in Ottawa by a score of 2-1, despite a valiant showing by Morenz. This I’ve learned, too: “The Habitants plays seemed to made with deliberation and method and they wasted no valuable stamina in headlong rushes.”

Montreal was getting in gear by January 30, also a Wednesday in 1924, when they beat Hamilton 5-2 at the Forum on soft ice. Boucher and Morenz each scored a pair of goals, Joliat one of his own. The crowd was small, about 4,000, and the referee was Mike Rodden. The jeers he got towards the end of the game were “good-natured,” the Gazettesays: “he called back the play three times for offsides and on each occasion the puck had been sent past [Hamilton goaltender Jakie] Forbes.”