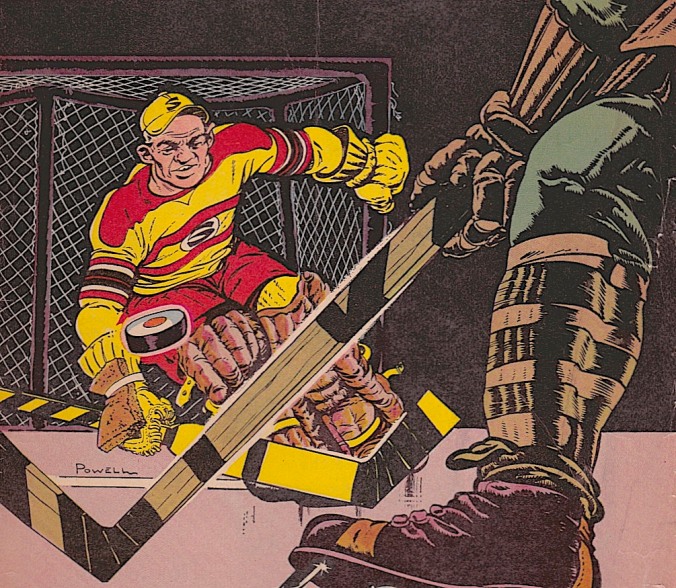 Finally. The way the hockey-book writers cheered one of their own this week, you’d think the whole entire clan of them had been honoured by the Canadian chapter of the Jewish National Fund for their collective achievement in hockey scholarship rather than just the author of A Great Game. Forgive them their pride — these writers work alone, most of the time, shrouded in archival shadows. And if they want to step into the glow given off by the newly announced Stephen J. Harper Hula Valley Bird Sanctuary Visitor and Education Centre in Israel’s north, near the Golan Heights — well, why not? This is their time, now — the birds can have theirs, later.

In Florida, Tampa Bay forward Steven Stamkos strolled into a press conference two weeks fracturing a shin. He was limping a little, to be sure, but he was “positive and hopeful” — and not ruling out a return in time to play for Canada at the Sochi Olympics in February. Was he shoved on the play, by Boston defenceman Dougie Hamilton? Yes, he thought so. But in time he’d realized: it was “a hockey play.” He hadn’t heard from Hamilton, but Bruins’ captain Zdeno Chara had texted him and the coach, Claude Julien, visited him in hospital.

Also looking this week to the Olympics was Brian Burke, who talked to Eric Francis of The Calgary Sun. If Canada’s the favourite to win in Sochi, according to Burke, another team that unnerves him is Russia. Sorry, that’s not quite right: Russia scares “the living hell” out of him:

“Because it’s their home soil, it’s going to be crazy there, and we hear rumours of huge bonuses for players if they win gold.”

At The Hockey News, Matt Larkin was counting, this week, and that’s how he determined that as of Monday, in the 82 games Sidney Crosby played over the past three seasons, he had 123 points to his name.

Profiling David Booth, Dave Ebner of The Globe and Mail told of the Vancouver winger’s love of the hunt:

For a show on a niche network, Wild TV, Booth killed a black bear with a bow in Alberta after luring it with a pile of bait, a mix of molasses, beaver, and oatmeal. Bear baiting is illegal in British Columbia and numerous U.S. states. Booth broadcast his exploits on Twitter.

Gary Bettman’s week included a big headache and a big deal. Head first: in Washington, former players with lawyers launched a lawsuit citing the NHL’s negligence when it comes to its handling head injuries over “the past decades.” From a statement by Mel Owens, one of the lead lawyers:

In 2004 the NHL introduced a series of updates to the rule-set to encourage a faster, more exciting, and ultimately more marketable product. As a result, the number of violent in-game collisions and occurrence of head trauma have increased. When coupled with the NHL’s refusal to protect players by banning full-body checking or penalizing on-ice fist fights, the league has created a dangerous atmosphere for players. The complaint alleges that the NHL either ignores or consistently lags behind other hockey leagues in adopting protections for players in accordance with current medical knowledge of concussions. Instead, the NHL continues to glorify and empower players known as “enforcers” — players with the singular intention of injuring the opposing team.

Bettman’s response was terse: “We believe this is a lawsuit without merit.”

He was much happier to talk about the massive deal he did, the 12-year, C$5.232-billion media rights agreement that all but wiped TSN off the hockey-broadcasting map; threw Hockey Night in Canada’s long-term future into doubt (not to mention the CBC’s), and united the country’s curiosity around the vital question: what about Don Cherry?

Who, of course, spoke up on Saturday night, between periods. The lawsuit is, as far as he’s concerned, a moneygrab; nonsense; a moneygrab; ridiculous; a disgrace and — did he mention? — a moneygrab.

As for what might happen to Coach’s Corner, Cherry was clear in comparing himself to Bobby Orr and demanding something else that involved a … turnip truck, which he hadn’t fallen off. END_OF_DOCUMENT_TOKEN_TO_BE_REPLACED