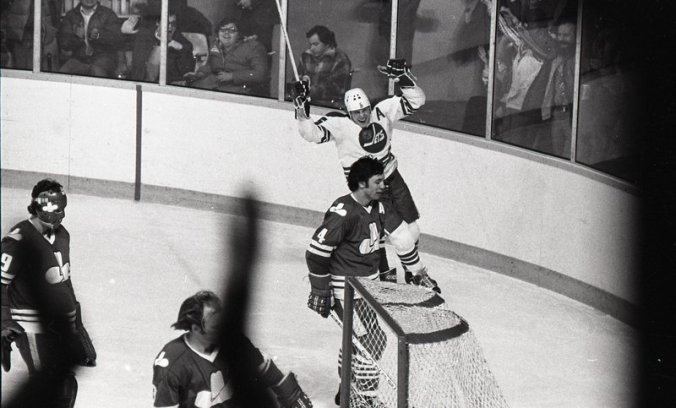 Born in Örnsköldsvik in Sweden on this date in 1951, when it was a Sunday, Anders Hedberg made his original North American mark as a right winger playing for the WHA’s Winnipeg Jets in the mid-1970s before he and linemate Ulf Nilsson migrated to the NHL’s New York Rangers. Nicknamed the Swedish Express, Hedberg won the Lou Kaplan Trophy as the WHA’s top rookie in 1975. Teamed with Nilsson and Bobby Hull on Winnipeg’s Hot Line, he helped the Jets win a pair of Avco championship trophies.

Deserving of more hoopla than it’s ever received is Hedberg’s record from the winter of 1977 when, at the age of 25, he became the first player in major-league hockey history to score 50 goals in fewer than 50 games. A 23-year-old Maurice Richard, of course, scored 50 in 50 for the Montreal Canadiens in 1945, and Hull did it at age 36 for the Jets during their 1974-75 campaign. Going into Winnipeg’s February 6, 1977, game against the Calgary Cowboys at the Winnipeg Arena, Hedberg had 48 goals. It was Winnipeg’s 49th game of the season, and the 47th that Hedberg had played in. Hedberg, who’d finish the year with 70 goals, scored two that night on Calgary goaltender Gary Bromley — that’s the second one he’s celebrating, above — and another into an empty net, sealing Winnipeg’s 6-4 win. “They’ll see Richard,” the winger said later, “they’ll see Hull in the record books, but they’ll still ask, who’s that Hedberg?”

Another Lou Kaplan Trophy-winner would subsequently surpass Hedberg’s mark, of course: in 1981, aged 20, Wayne Gretzky of the NHL Edmonton Oilers scored his 50th in 39 games. 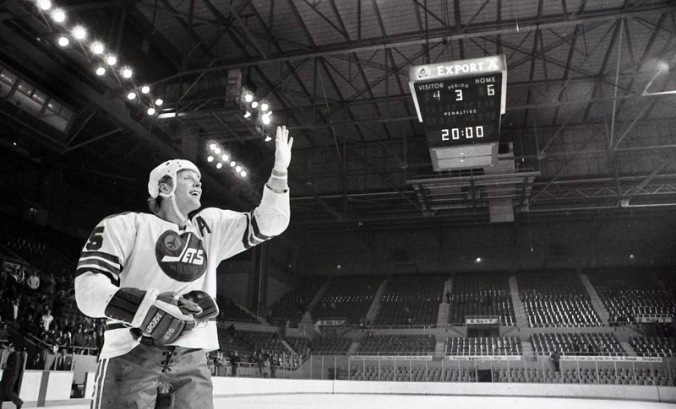 Winnipeg beat the Nashville Predators last night to advance to the Western Conference finals where they’ll meet the Vegas Golden Knights to see which of them of them will play for the Stanley Cup. That seems reason enough to visit with a former (WHA) Jet, Anders Hedberg, seen here in February of 1977. He had reason to revel: having just scored three goals in Winnipeg’s 6-4 win over the long-lost Calgary Cowboys, Hedberg now had 50 in the 49 games his team had played that season. (He’d missed two games, injured). That put him into the annals of hockey history, ahead of Maurice Richard, whose first, famous 50-in-50 came in 1945, as well as own linemate, Bobby Hull, who’d repeated that feat over the course of the 1974-75 WHA season.

There doesn’t seem to have been much disputing Hedberg’s achievement at the time, though it can’t exactly have pleased the rivalrous governors of the NHL. Mike Bossy of the New York Islanders would notch 50 of his own in 50 games in 1980-81, and the very next year after that, Wayne Gretzky would, playful as ever, score 50 in 39. With the demise of the WHA, Hedberg’s feat has been shuffled, along with Bobby Hull’s, into the footnotes: in hockey’s NHL-dominated universe, those goals you scored in that other league only count as a novelty next to an asterisk. The way the NHL sees it, you have to score 50 in your team’s first 50 games. Five different players have done that, including Mario Lemieux and Brett Hull, twice. Gretzky did it three times in his career.

“I can’t explain how it feels,” Hedberg told reporters after the game in ’77. The Swedish Express, they were calling him back then, noting that he did his scoring with one of hockey’s hardest wrist shots and what had to be the best backhand in the business. “I don’t think Anders has taken a slapshot this year,” said his other linemate, Ulf Nilsson.

It wasn’t all good news for Hedberg that night: playing Calgary that record-setting night also strained some of his ligaments, which put him out of the line-up for ten days. He made up for lost time when he got back, finishing the year with 70 goals. As for the Jets, they were the defending Avco Cup champions that year, and did indeed make it to the finals again, only to fall to the Quebec Nordiques. They did roar back to win two further championships in 1978 and 1979, in the WHA’s last two seasons.