A birthday for former Montreal Canadiens captain and speediest of right wingers Yvan Cournoyer, born in Drummondville, Quebec, on a Monday of this very date in 1943. That makes him 79: happy birthday to him. Inducted into the Hall of Fame in 1982, he was a star, of course, of Canada’s 1972 Summit Series triumph. Cournoyer won 10 Stanley Cup championships over the course of his 16-year Habs tenure, scoring a bucket of goals, including a career-high 47 in 1971-72. He scored 43 in 1968-69, none of which came on the Saturday night of January 18, ’69, at Montreal’s Forum, when (above) he loosed a shot on Chicago Black Hawks’ goaltender Denis DeJordy, and beat him high — only to be denied (below) by a crossbar. Montreal won the game all the same, by a score of 3-1, getting goals from Claude Provost, Serge Savard, and Bobby Rousseau. Kenny Wharram scored for Chicago. 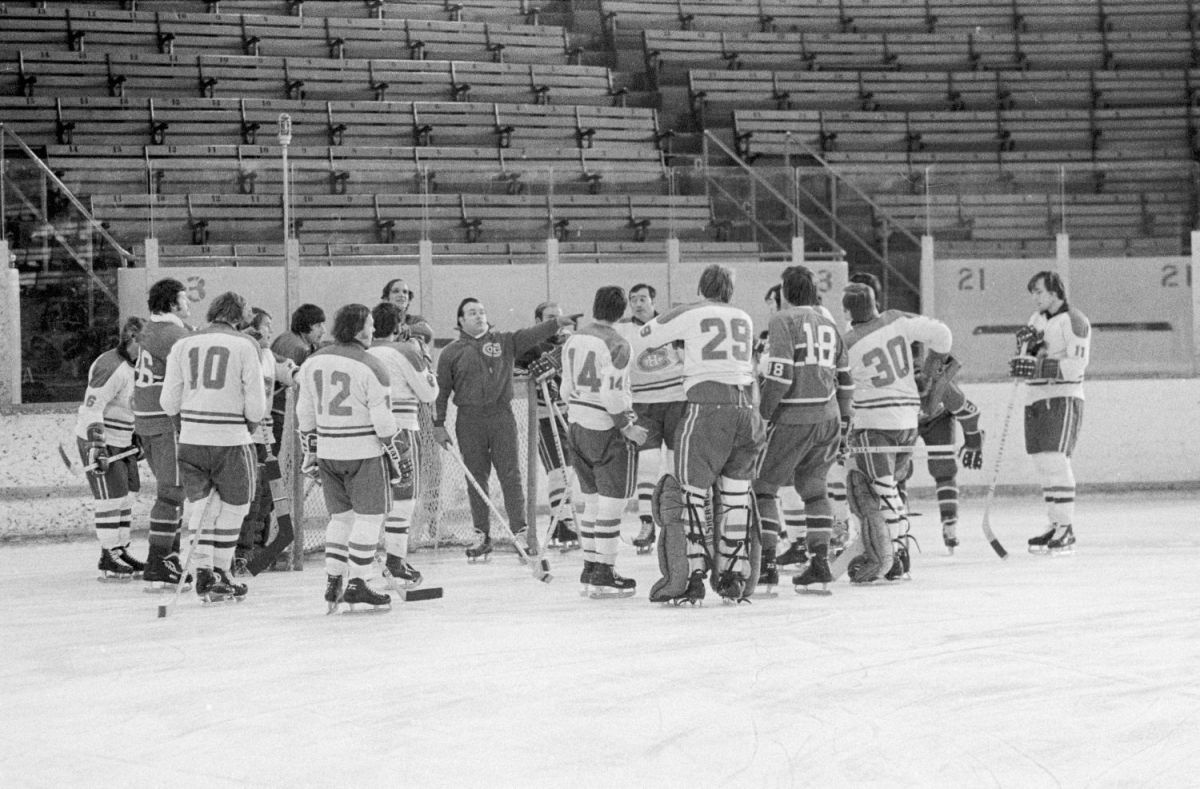 Listen Up: A birthday yesterday for the NHL’s canniest — and winningest — coach: Scotty Bowman rounded the corner to 87 on Friday. Five of the nine Stanley Cups he won, of course, came in Montreal, which is where he’s seen here, advising a Canadiens crew circa … I’m guessing it’s during the 1971-72 season, his first in Montreal. That hinges on whether I’m properly identifying the three goaltenders in the group. Tall number 29 is obviously Ken Dryden; wearing number 30 I’m thinking is Phil Myre. That leaves the ’minder fourth in from the left. Rogie Vachon was still with Montreal that year, but it doesn’t look like him, so possibly it’s the other man to have worn number 1 that year, Denis DeJordy? I’ll go with that. There are a couple of obscured players on the right side of the group. Excusing them, it looks like we’ve got, from left, Henri Richard, Pierre Bouchard, Guy Lafleur (who turns 69 tomorrow), maybe DeJordy, Guy Lapointe, Yvan Cournoyer, possibly Rey Comeau, Jacques Laperriere, Bowman, Jacques Lemaire, Rejean Houle, Frank Mahovlich, Ken Dryden, Serge Savard, Myre, Jimmy Roberts, and Marc Tardif. (Image: Antoine Desilets, Bibliothèque et Archives Nationales du Québec) 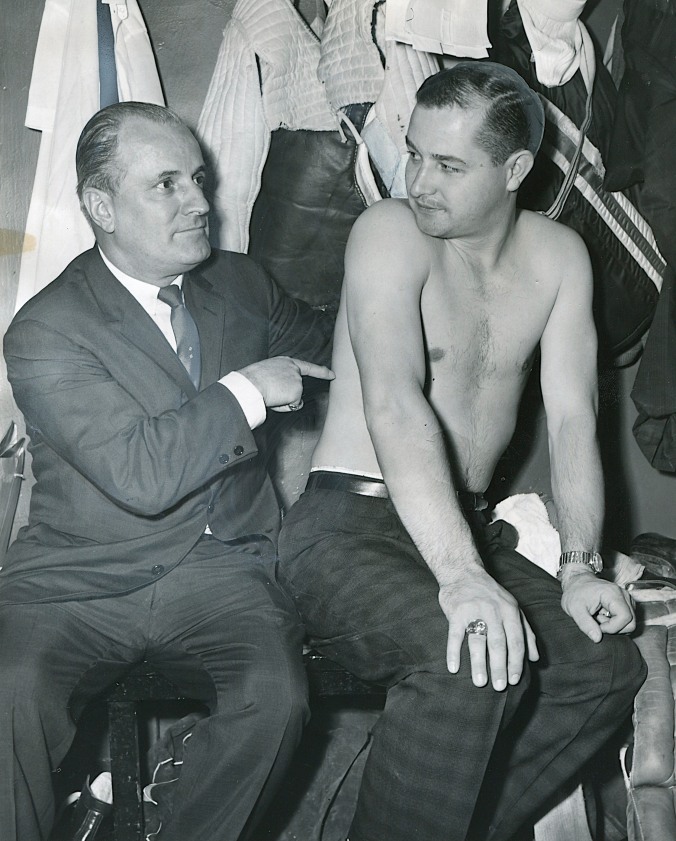 Born in Humboldt, Saskatchewan, on a Saturday of this date in 1931, the great Glenn Hall celebrates his 88thbirthday today. For the first eight seasons of his NHL career, playing first in Detroit before a trade took him to Chicago, Hall never missed a start in goal, suiting up for 552 consecutive games (regular seasons and playoffs), or (if you’d prefer) 33,126 minutes and 55 seconds. He reached his limit in early November of 1962, at the age of 31, when he tweaked his back in a Tuesday practice, or twinged it, twisted or … anyway, it hurt.

Two days later he geared up all the same, took to his net as usual when the Black Hawks hosted the Boston Bruins. Ten minutes in, after a goal by Bruins’ centre Murray Oliver, Hall left his crease to consult with coach Rudy Pilous. He didn’t return. Standing by to replace him was 24-year-old Denis DeJordy, called up for just such a contingency from the AHL Buffalo Bisons. Deemed by many to be the best goaltender outside the NHL, DeJordy held the fort. After the Bruins and Hawks finished up tied 3-3, press reports variously described Hall’s injury as “a pinched nerve” and “strained ligaments.” Whichever it was, we do know, thanks to Chicago GM Tommy Ivan, pointedly pictured here, post-game, the exact location of Hall’s soreness. He missed three games in all, two of which Chicago won. Returning to action in New York on Saturday, November 17, 1962, Hall and his teammates beat Gump Worsley’s Rangers by a score of 4-3.

Denis DeJordy was a young Chicago prospect playing in the AHL for the Buffalo Bisons when the Black Hawks won the Stanley Cup in 1961, but when the time came to etch the names of the champions on the silverware, DeJordy’s was somehow included. Once the Saint-Hyacinthe, Quebec-born goaltender’s NHL career did get going, he’d get into 334 games and while none of those won him another Stanley Cup, he did share in a Vézina Trophy with Glenn Hall in 1967. Shown here, above, with the tools of his trade at about that time, DeJordy played seven seasons for Chicago before moving on to stints with Los Angeles, Montreal, and Detroit. He first skated for the Black Hawks during the not-quite so-glorious 1962-63 season, when they ended up losing to Detroit in a Stanley Cup semi-final. The year after that, as DeJordy graduated to serve as Glenn Hall’s full-time back-up, David Condon of The Chicago Tribune introduced him to the Black Hawk faithful. From October of 1963:

To the rare breed that is a Black Hawk fan, there is only one goalie. That is incongruous, because this season the Chicago club will travel with two sentinels: Glenn Hall, the house man — plus Denis DeJordy.

Hall, 32 last Thursday, has been on the first or second All-Star team all except one year of his National Hockey league career. Of that you are reminded by his fan club, which neglects to mention that Hall was one of the Hawks who ran out of gas late last season.

The Hawks, however, took note of Hall’s weariness and believe they will solve any repetition of that problem by spelling Hall with DeJordy, who is 24. Hall will wear the familiar No. 1. DeJordy’s number will be 30, because the National League now has ruled that a club must not outfit all its goaltenders in the traditional No. 1.

To teammates, as well as to fans, Hall is “Mr. Goalie.” DeJordy has the less affectionate nickname of “Denis the Menace.” If DeJordy’s advance billings are accurate, however, Chicago will find increasing admiration for the newcomer as the calendar continues to close in on Hall.

DeJordy played a bit role in the Hawks’ final fiasco last season. No one on the Hawks was impressive at that trying time; in fact, management even became peeved at Publicity Director Johnny Gottselig, who was skating for the Hawks when Hans Brinker was an amateur, and Johnny was dismissed in a house sweepout that also cost the job of Coach Rudy Pilous.

But DeJordy comes well recommended from Buffalo, where the Hawks’ new skipper — Billy Reay — won the American League’s regular season championship and the playoffs. DeJordy won so many individual honors at Buffalo last season that he had to pick ’em up in a bag.

His bonus money, for individual honors alone, amounted to a staggering $4,200. Denis must have spent a sizeable portion of that for groceries, during the off-season, because he weighed only 155 when he appeared here last winter. Now he has bulked up to 170.

The Hawks lost only three of this season’s 10 exhibition games. One was to Hershey of the American league, 3 to 2. The winning goal was off Denis DeJordy. It was scored by Roger DeJordy, a veteran at Hershey. After that goal, Roger fought the Black Hawks to get the puck as a souvenir. He explained that, though both spent several years in the American league, it was his first goal ever against brother Denis. 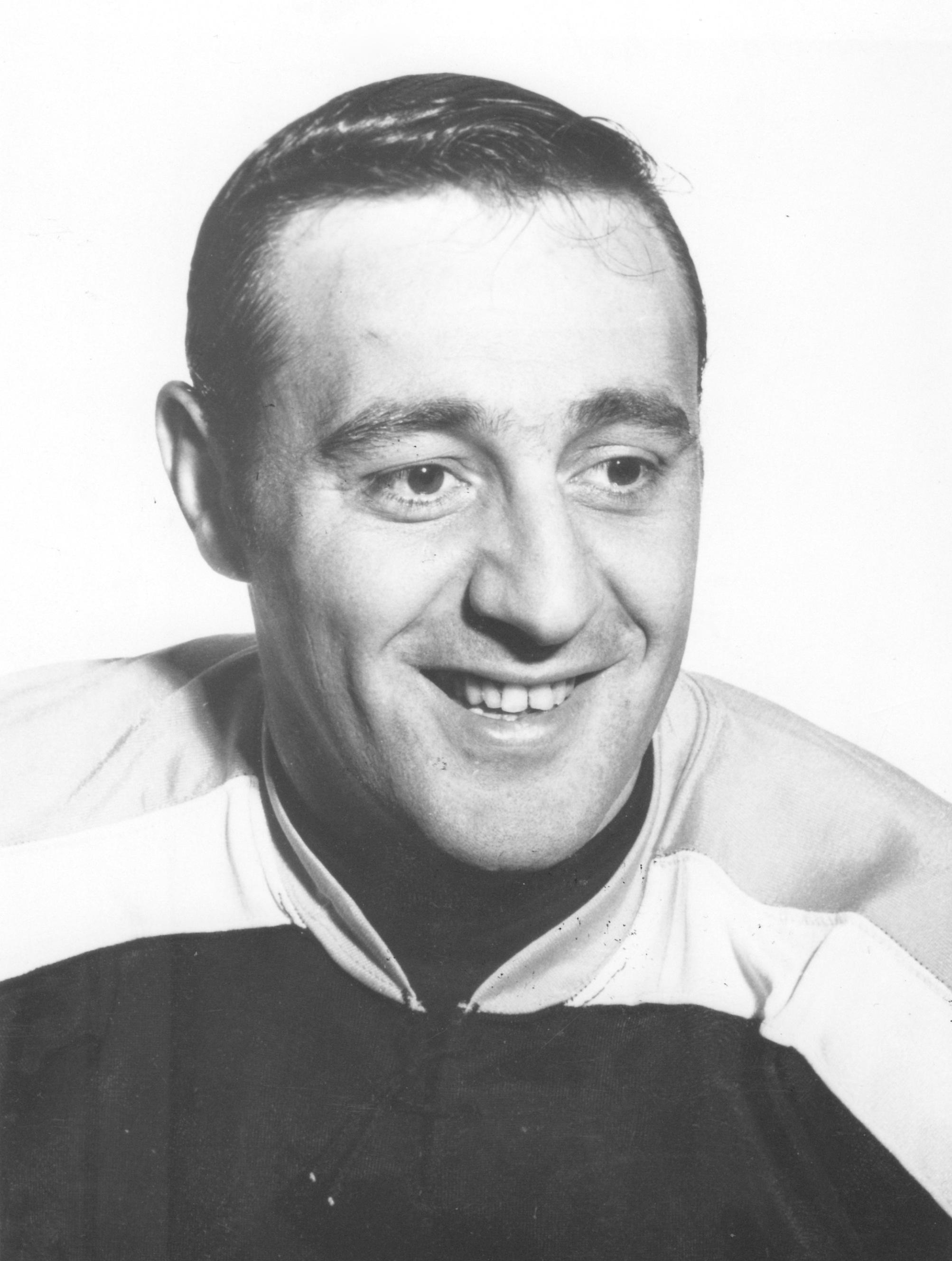 Deal Him Out: Trades made Phil Esposito depressed and angry.

Brett Hull grinned when he was traded from Calgary to St. Louis in 1988. “Yesssssss,” he said, and I quote. A few months later and a little to the north, Wayne Gretzky departed for Los Angeles amid a storm of tears, anger and accusations. That, the latter, is probably closer to the norm when it comes to what hockey players go through when they’re swapped, one team to another. A lot of the time they feel what Arnie Brown felt when the New York Rangers sent him to Detroit in 1971: “depressed, bitter, and shocked.”

Dave Schultz was dazed. His head felt heavy. He never thought it would come to this. Traded for draft choices! This was in 1976 when Philadelphia sent him south to do his hammering in L.A. He was angry. He blamed Bobby Clarke. After all he’d done for the Flyers in the way of punching their opponents! Not to mention them punching him! Humiliating. He said some things, which a reporter heard and published. There was a furor. “It’s dislocation pure and simple — and rejection,” he’d wax later. “You don’t think that someone else wants you; you think that somebody doesn’t.” END_OF_DOCUMENT_TOKEN_TO_BE_REPLACED