First To The Fight: Charlie Conacher leads his Leaf teammates to the ice at the Boston Garden in 1936. Following behind that’s (possibly) Pep Kelly and (certainly) captain Hap Day. Bringing up the rear (I’ll guess) might be Red Horner. (Image: Boston Public Library, Leslie Jones Collection)

Charlie Conacher was just 28 when he announced his retirement from hockey in January of 1938. Most in the media agreed with The Ottawa Journal’s assessment: the Leaf captain was “the game’s hardest shooter” and had been, for years, “one of its most compelling figures.” Injuries to knees and kidneys, wrists and back had worn him down: it was on the advice of Leafs’ physician Dr. J.W. Rush that he was making his exit. By columnist Walter Gilhooly’s account, the news hit the NHL like a bomb, and would severely impair Toronto’s chances for a Stanley Cup. Leafs’ manager Conn Smythe wasn’t about to argue that: “It’s a terrific blow to us,” he said.

Conacher’s retirement didn’t last: he made his return to the rink the following season as a Detroit Red Wing, where he played for a season before heading to New York, where he was an American for another two years before he (definitively) hung up his skates in 1941.

While Conacher’s initial 1938 retirement didn’t stick, it did allow for an extended period of career memorializing as teammates and coaches and sportswriters summed up and celebrated his years as (quote) a bruiser in action and one of the strongest men in hockey. Before Conacher made his NHL debut in 1929, Bill Cook of the New York Rangers was said to be the best right winger in hockey. Now, retired and coaching, Cook weighed in to name his all-time all-star team. George Hainsworth was the best goaltender he’d ever seen, Eddie Shore and Ching Johnson the best of defencemen. For forwards, he anointed Howie Morenz at centre, Aurèle Joliat and Conacher on the wings.

Alec Connell had stood in Conacher’s way many times in his years tending goal for the Ottawa Senators and Montreal Maroons. “He was the best right wing I ever saw,” Connell said of Conacher, who weighed in close to 200 pounds. “He was as fast on his skates as a 150 pounder and there was never anyone with a more wicked shot. He drove them at you like a bullet. On top of his size and his strength and his speed, he was brainy. You never knew how he was coming in on you with the puck. One time he’d play you one way. The next time he’d come down on you in an entirely different way. He was a fellow that it was almost impossible to get set for, and then he had that blazing shot.” 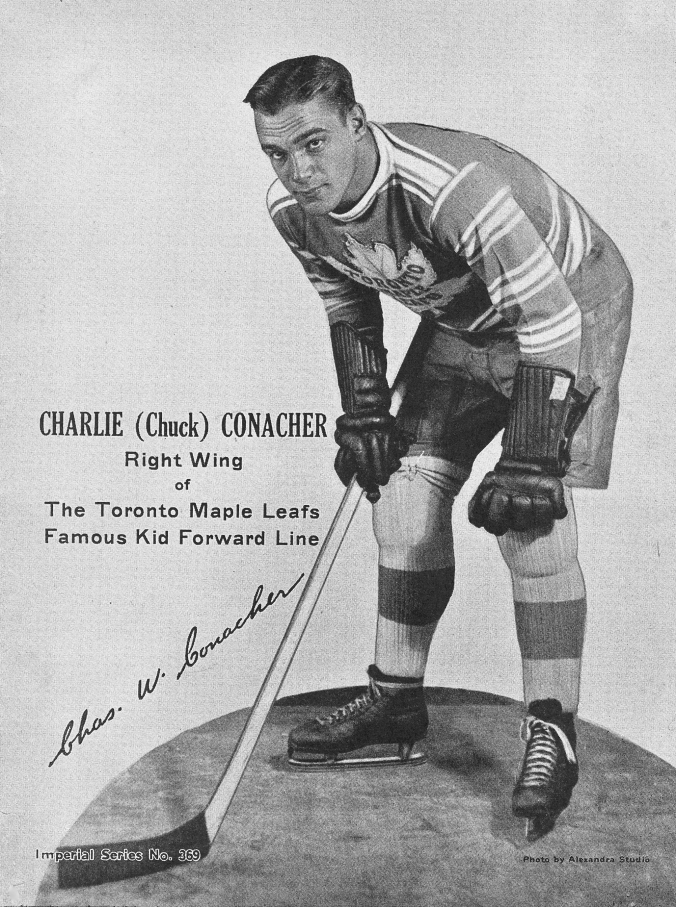 Across nine NHL seasons, Conacher had scored an even 200 regular-season goals by then, another 14 in the playoffs. Five times he was the NHL’s leading goalscorer; twice he led the league in points. He wouldn’t add substantially to those numbers in his three subsequent non-Leaf years, but his totals are still impressive. In 459 NHL games, he collected 225 goals and 398 points. In 53 playoff games, he scored 23 goals and 43 points. He helped the Leafs win the 1932 Stanley Cup, and in 1961 he was elected to the Hockey Hall of Fame. Charlie Conacher died of throat cancer on December 30, 1967. He was 58.

For all the facts and figures we can readily summon to delineate his life and times, the date of his date of his birth remains elusive. Is today the day we should be observing his arrival at Toronto’s Salvation Army Maternity Hospital in 1909, or should we be saving the greetings and salutations for tomorrow?

Many of the standard hockey references actually give Conacher’s birthdate as Monday, December 20, 1909. If you’re at the library and you haul down Total Hockey off the shelf (be careful), that’s what you’ll see listed in the NHL’s fat 1998 official encylopedia (and its 2000 second edition, too). Nowadays, the league keeps its records online, and that’s the date you’ll see too if you click over to Conacher’s file at NHL.com. The Hockey Hall of Fame’s Conacher page says the same, as does the researcher’s go-to resource, Hockey Reference. Also: Wikipedia.

But not everyone agrees. Back at in the stacks, reach for The Complete Encylopedia of Ice Hockey, a venerable old tome compiled by Zander Hollander and Hal Bock in 1970, and you’ll find Conacher’s date of bath given as December 10, a Friday. Another voluminous online source, hockeydb.com, concurs.

Another click will find you a third possibility: the Conacher file at the Society for International Hockey Research has it that the man they’d come to call the Big Bomber was in fact a Thursday’s child, made his worldly debut on December 9, 1909. (I’m a member of SIHR, so if you’re not, you’ll have to trust me on this — or else take out a membership.)

December 20 is the easiest to dispense with: I haven’t seen any evidence to back it up.

SIHR’s December 9 seems the most promising, at least from a documentary perspective. The Conacher biography there cites as its source Conacher’s birth certificate, and that would seem to close the case, such as it is. But if you go out on your own to search for this, what you’ll find is … not quite that.

Conacher’s parents don’t seem to have certified his birth in 1909. Thought they had, hadn’t? Meant to, but forgot? Don’t know. On January 18, 1922, when Charlie was 12, his mother did see fit to get the paperwork done to confirm his existence. On that day, Elizabeth Conacher filled out and signed a Declaration to let the Province of Ontario and thereby the Dominion of Canada officially know about her son. The form itself explains that it’s “Registering a Birth which has not been registered in accordance with Section 22 of THE VITAL STATISTICS ACT, 1919.” As well as giving some family information and the basic facts of Charles William himself, she signed her name under the boilerplate about this being a “solemn declaration” that she “conscientiously” believed to be true, “knowing that it is of the same force and effect as if made under oath.”

Could she have made a mistake?

It’s not for me to presume that she did, and I’m sorry if it seems rude to doubt a mother’s word. (It does; I see that.) It’s just that, well, Conacher himself seems to have understood that his birthday fell on December 10.

I don’t have this from him directly, mind you, or anyone in his family — I’m going on, as one does, what old newspapers tell me. They’re not infallible, of course. The Globe and Mail could very well have, it’s true, messed up on December 10, 1936 when they printed this in their sports pages, not far from the latest edition of Conacher’s own column (“Hockey Discussed by One of The Game’s Greatest Players”): 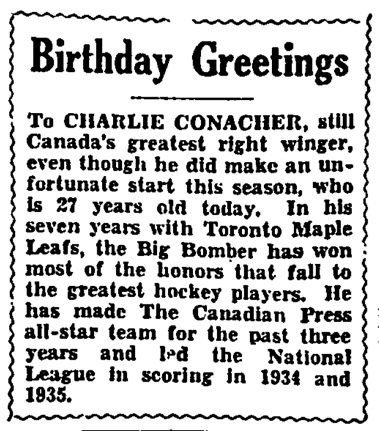 Is it possible, too, that the Globe erred again, 31 years later, in a short, sad note published on Monday, December 11, 1967, just a few weeks before his death? I guess so. “Charlie Conacher, right wing member of the Toronto Maple Leafs’ Kid Line of the 1930s, celebrated his 57th birthday in the Toronto General Hospital yesterday,” that item began. The fact that it was his 58th birthday doesn’t exactly proclaim its credibility, I realize, but that on its own doesn’t discredit the birthdate reported.

All in all, I’ll tend towards December 10 as Charlie Conacher’s birthday, I think. For those who prefer to celebrate it today, here’s to you, and him.

UPDATE: Further fodder to bolster the case for December 10: in 1949, when Charlie Conacher was coaching the Chicago Black Hawks, the team went to Montreal for a early winter visit that ended 1-1. Reporting the news of that Saturday, December 10 game on the following Monday, December 12, here’s the Gazette’s Dink Carroll:

It was Charlie Conacher’s birthday on Saturday and early in the day, Bill Tobin, president of the Black Hawks, wired Doug Bentley, team captain, that a win would be a nice birthday present for the club’s coach. Charlie was lucky to get away with a tie. 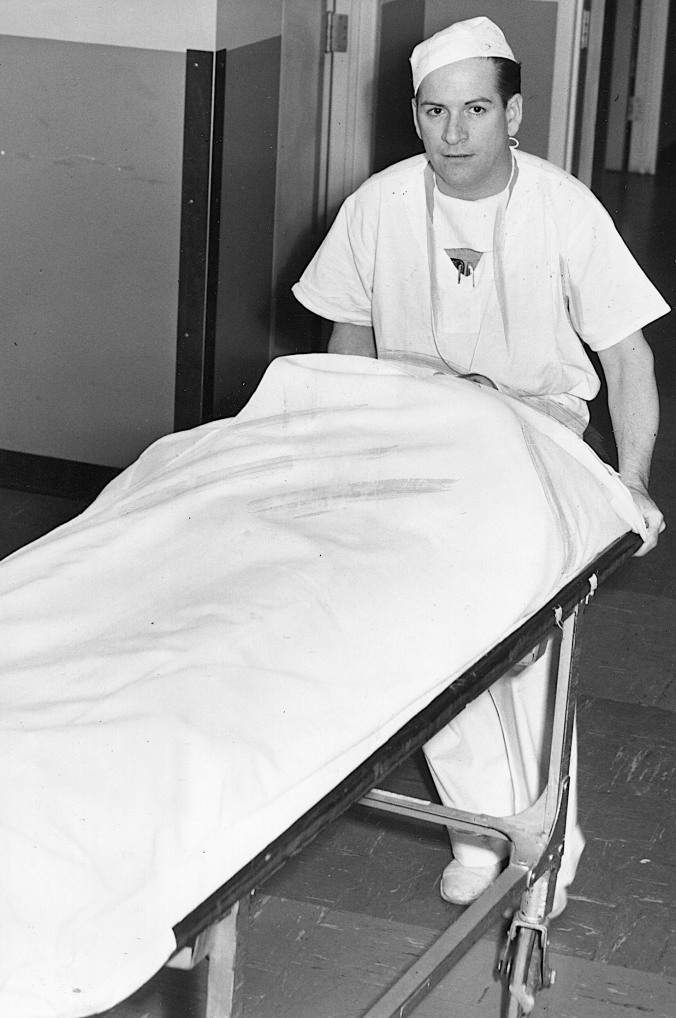 Goalie Gurney: Terry Sawchuk on his way to elbow surgery at Detroit’s Osteopathic Hospital in April of 1952. (Image: Ray Glonka)

We’re getting to know their names now, all the doctors of hockey, they’re in the news as much as their patients. Dr. Micky Collins was the concussion specialist who spoke first at Sidney Crosby’s famous state-of-the-skull address back in September. He talked about fog and Ferraris, boogeymen, herding cows back into the barn. He cited deficits and impacts, and introduced us to the word vestibular.

Dr. Ted Carrick was there, too: he was the one who talked about small perturbations and great perturbations. He’s the one who’s stayed in the news, too, having loaded Crosby into a whole-body gyroscope and turned him all around. At the news conference he’s the one who announced that when all was said and done, Sid’s brain would be even better than it was before.

Dr. Joseph Maroon also treated Crosby, and with Dr. Collins he was advising Philadelphia’s Chris Pronger this week to rest his shaken brain for the rest of the season. Toronto neurosurgeon Dr. Michael Cusimano is the guy who told The Toronto Star this week that the NHL isn’t doing enough to protect its players. Earlier in the fall, he and Dr. Paul Echlin from London, Ont., unveiled a study of two junior teams that found that 25 per cent of the players suffered concussions. Dr. Charles Tator is the news every other day, it seems: recently he was questioning the spin-cycle Dr. Carrick put Crosby through. “Totally unproven,” he told The Star. “It could even do harm.” END_OF_DOCUMENT_TOKEN_TO_BE_REPLACED