Ready Room: Born in Landrienne, Quebec, on a Tuesday of this date in 1946, Hall-of-Fame defenceman Serge Savard (a.k.a. The Senator) is 76 today: many happy returns of the rink to him. He played on eight Stanley Cup-winning teams with the Montreal Canadiens from 1968 through to 1979. He won a Conn Smythe Trophy in 1969 as playoff MVP and manned the defence for Canada during 1972’s Summit Series. He served as GM of Montreal from 1983 to 1995. He’s pictured here in the later 1960s in a Forum dressing room, under the gaze of Dick Irvin. (Image: Fonds Antoine Desilets, BAnQ Vieux-Montréal)

Born in Egmondville, in Ontario’s southwest Huron County, on a Saturday of this date in 1904, Cooney Weiland grew up in nearby Seaforth. He started his 11-year NHL career in Boston and finished it as a Bruin, too, winning bookend Stanley Cups in 1929 and 1939 with Art Ross’ team. He also saw ice-time for the (original) Ottawa Senators and Detroit’s Red Wings. He was Boston’s ninth captain. Appointed in 1937, he served two seasons in the role, between the tenures of Red Beattie and Dit Clapper. As a coach, Weiland had charge of the Bruins for two seasons, steering them to another Cup in 1941. Weiland went on coach the AHL Hershey Bears and then, enduringly, from 1950 through to 1971, Harvard University’s men’s team.

A Leaf legend who played his part in five successful Maple Leaf Stanley Cup campaigns, Turk Broda was born in Brandon, Manitoba, on Friday, May 15 in 1914. Here he is in the aftermath of Toronto’s 1947 championship, which the Leafs completed on Saturday, April 19 of that year, dismissing the Montreal Canadiens at Maple Leaf Gardens by a score of 2-1 to take the Cup in six games. That’s Leaf majordomo Conn Smythe gripping and grinning on the right. Left is Toronto Mayor Robert Saunders. 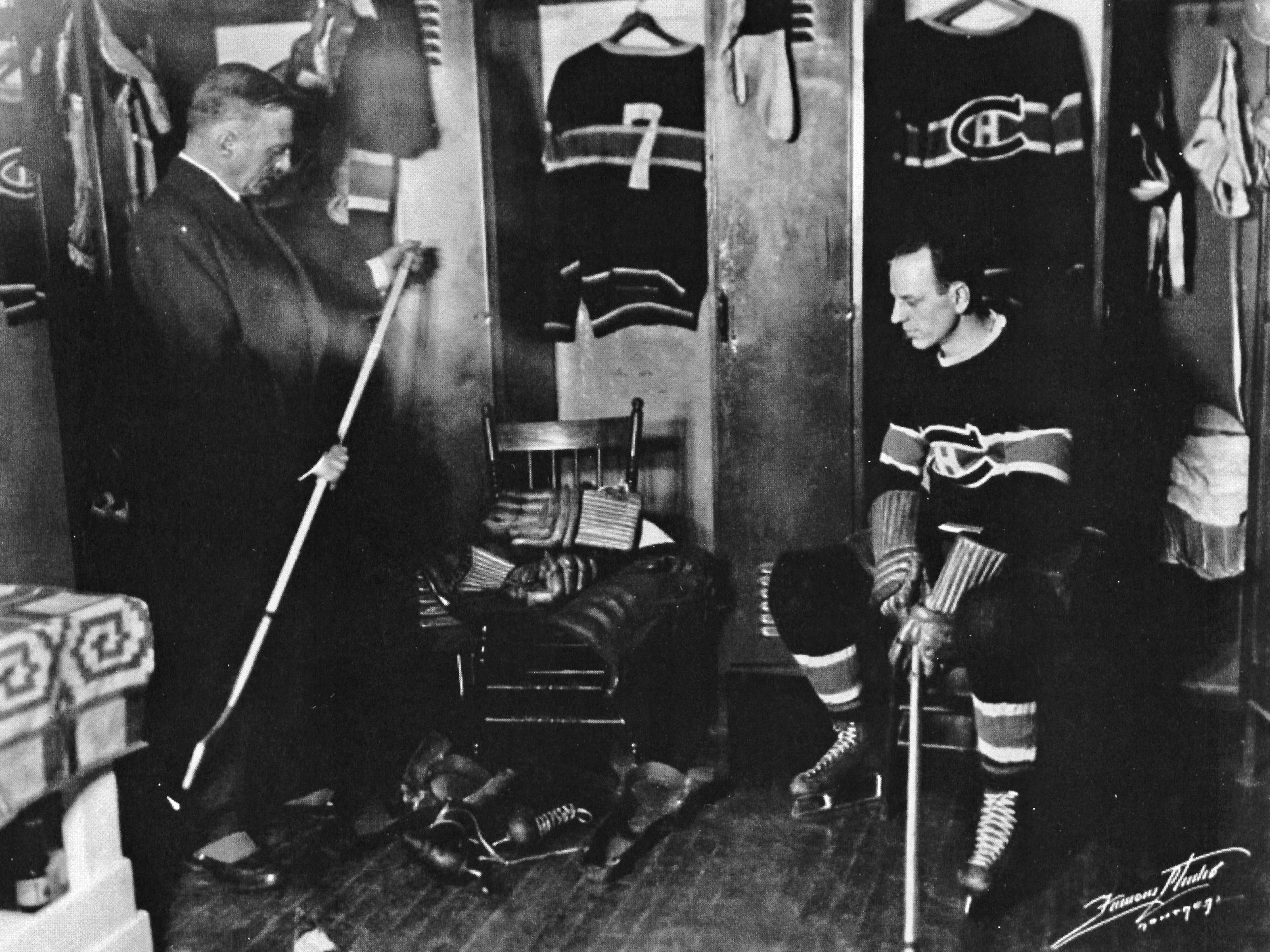 “I can’t talk about it,” said Cecil Hart, coach of the Canadiens. “It is terrible — a thunderbolt.”

It was 84 years ago, late on another Monday night of this date, that the great Howie Morenz died at Montreal’s Hôpital Saint-Luc of complications after he fractured his left leg in an accident at the Forum in a game against the Chicago Black Hawks at the end of January. He was 34.

Funeral services were held at the Forum three days later. Ten thousand mourners were on hand in the arena, and a crowd estimated at 15,000 thronged the route as the cortege made its way to Mount Royal Cemetery for the burial.

Two days earlier, on Tuesday, March 9, Morenz’s teammates somehow managed to get through their scheduled game against the Montreal Maroons. (The Maroons prevailed by a score of 4-1.) Aurèle Joliat, Morenz’s loyal left winger and his fast friend, was out of the line-up on the night with a leg injury, but he was back for Montreal’s Saturday-night meeting with the New York Rangers, wherein Canadiens prevailed 1-0 on a goal from Morenz’s long-time right winger, Johnny Gagnon.

That’s the night that the photograph above may well have been posed, showing Joliat and coach Hart gazing on Morenz’s forlorn gear. “The wait is in vain, the Meteor is extinguished,” read the caption above a version that ran on the Sunday in Le Petit Journal.

Leo Dandurand would tell the story that he’d been the one to put the 7 on Morenz’s sweater back when the Stratford Streak first signed on to play with Bleu, Blanc, et Rouge. “Remembering that Morenz’ contract was dated July 7, 1923 (which was also my birthday),” the Montreal owner, manager, and sometime coach later wrote, “I assigned him sweater number seven the first day he reported to Canadiens.”

A whole constellation of early Canadiens stars had worn the number seven going back to the beginnings of the team in 1910, including Jack Laviolette, Jimmy Gardner, Louis Berlinguette, Joe Malone, Howard McNamara, and (the last before Morenz) Odie Cleghorn.

When Morenz departed Montreal for the Chicago Black Hawks in 1934, Dandurand declared that no other Canadien would wear the number again. As Dandurand told it in 1953, he meant forever, though at least one contemporary newspaper account from the fall of ’34 suggests that the understanding at the time was that it would go unworn as long as Morenz continued playing in the NHL. Either way, by various accounts, sweater number seven remained hanging in the Montreal dressing room for the duration of Morenz’s two-year odyssey to Chicago (where he wore number 3) and then New York (where he was 12).

He reclaimed it when he (and Cecil Hart) rejoined Montreal in the fall of 1936. When he was injured in January, it returned to its hook when he departed the Forum on his way to hospital.

In the wake of his death, Canadiens immediately declared that his number would be worn no more, making Montreal’s seven the third NHL number to be retired, after Ace Bailey’s Toronto six and Lionel Hitchman’s Boston three, both of which were so honoured in the same week (Bailey first) in February of 1934.

In November of 1937, Canadiens did amend their numerical position, slightly, making clear that when Howie Morenz Jr. ascended to play for the team, he would inherit his father’s number.

Howie Jr. had celebrated his tenth birthday that year. He did, it’s true, show promise as a centerman in later years, skating with the Montreal Junior Canadiens as well as the USHL Dallas Texans before a degenerative eye condition put an effective end to his chances of reaching the NHL.

November of ’37 saw the NHL stage the Howie Morenz Memorial Game at the Forum. A team of NHL All-Stars beat a team combing Maroons and Canadiens by a score of 6-5 in front of a crowd of 8,683 fans. Some $20,000 was raised on the night for the Morenz family. Former Canadiens owner (and goaltender) Joe Cattarinich paid $500 for the Morenz’ equipment and sweater, which he then handed over to Howie Jr.

The program for that Memorial evening included this photograph, included here, above,  purported to be the only one in existence to have caught Morenz from the back while he wore his celebrated seven. It’s a good image, even if it isn’t, in fact, so very exclusive — I’ve seen Morenz showing his back in other photographs going back to the ’20s. 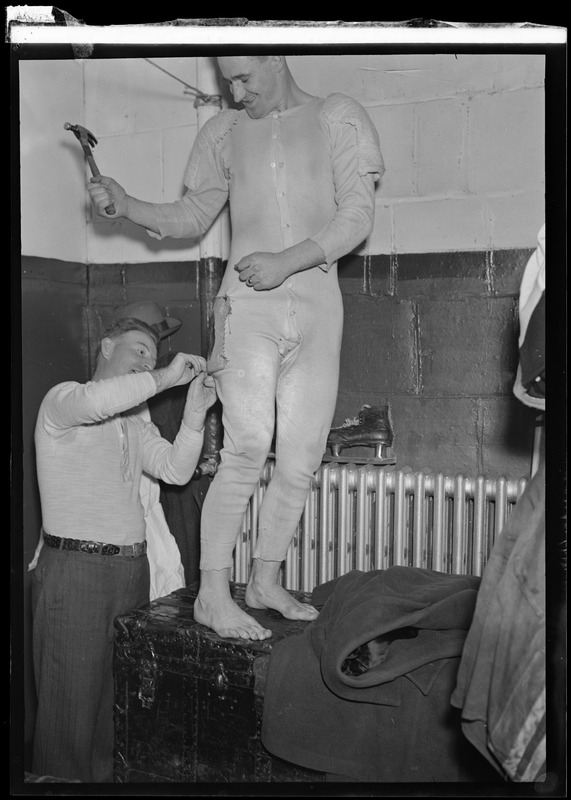 A Stitch In Time: Centre Charlie Sands played parts of five seasons for the Boston Bruins in the 1930s, and had stints with the Maple Leafs, Canadiens, and Rangers before his NHL career came to an end in 1943-44; this is his underwear, circa 1938. Working on repairs here in the Bruins’ Boston Garden dressing room is Red Casey, a member of Hammy Moore’s training staff. (Image: © Richard Merrill, Boston Public Library)

Jim Pappin scored the decisive goal in a 3-1 win, and Terry Sawchuk was the Toronto goaltender on a Tuesday of this date in 1967 when the Maple Leafs clinched their last (most recent?) Stanley Cup by overthrowing the Montreal Canadiens in six games. Punch Imlach’s underdog gaggle of Leafs included a couple of 40-year-olds in Johnny Bower and Allan Stanley, as well as 39-year-old Red Kelly; Sawchuk and captain George Armstrong were 36. The soggy scene here dates to what happened, back in the dressing room at Maple Leaf Gardens, after the Leafs won on this night 53 years ago. That’s Bower bared with 21-year-old Toronto winger Ron Ellis and assistant manager King Clancy, who was 64. Clancy had been seeing Stanley Cups for a while at this point: he won his first, as a defenceman for the original Ottawa Senators, at the end of March of 1923. He helped the Senators win another in 1927 and was part of a third championship team when he played for the Leafs in 1932.

Chicago trainer Eddie Froelich stitches Howie Morenz during the Mitchell Meteor’s short stint as a Black Hawk in the mid-1930s. When hockey season wasn’t in session, Froelich worked in baseball, tending the Chicago White Sox, Boston Red Sox, and New York Yankees over the course of his long career. Reminiscing in 1944, he said that Morenz was the most intense athlete he’d ever worked with. “There is no doubt,” he said, “that Howie is one of the greatest of hockey players — perhaps the greatest. He was as fast as light on skates, of course, and an expert stickhandler. But his skill was nothing compared to his love of the game. His approach to hockey was that of an artist and he had his full share of artistic temperament. Hockey was his life and his ability was a matter of all-consuming pride. You, of course, are familiar how athletes react when you write something about them that isn’t a plug. Sometimes they get mad. Sometimes they pretend to ignore it. Sometimes they’ll try to argue with you. But you never knew anyone quite like Morenz. As the years rolled by, he naturally got no better. Every once in a while some little observation that he wasn’t as fast as he used to be would get onto the sports page. Morenz wouldn’t get angry. He wouldn’t even talk about it. But he would brood for days and you actually could see the pain in his eyes.” 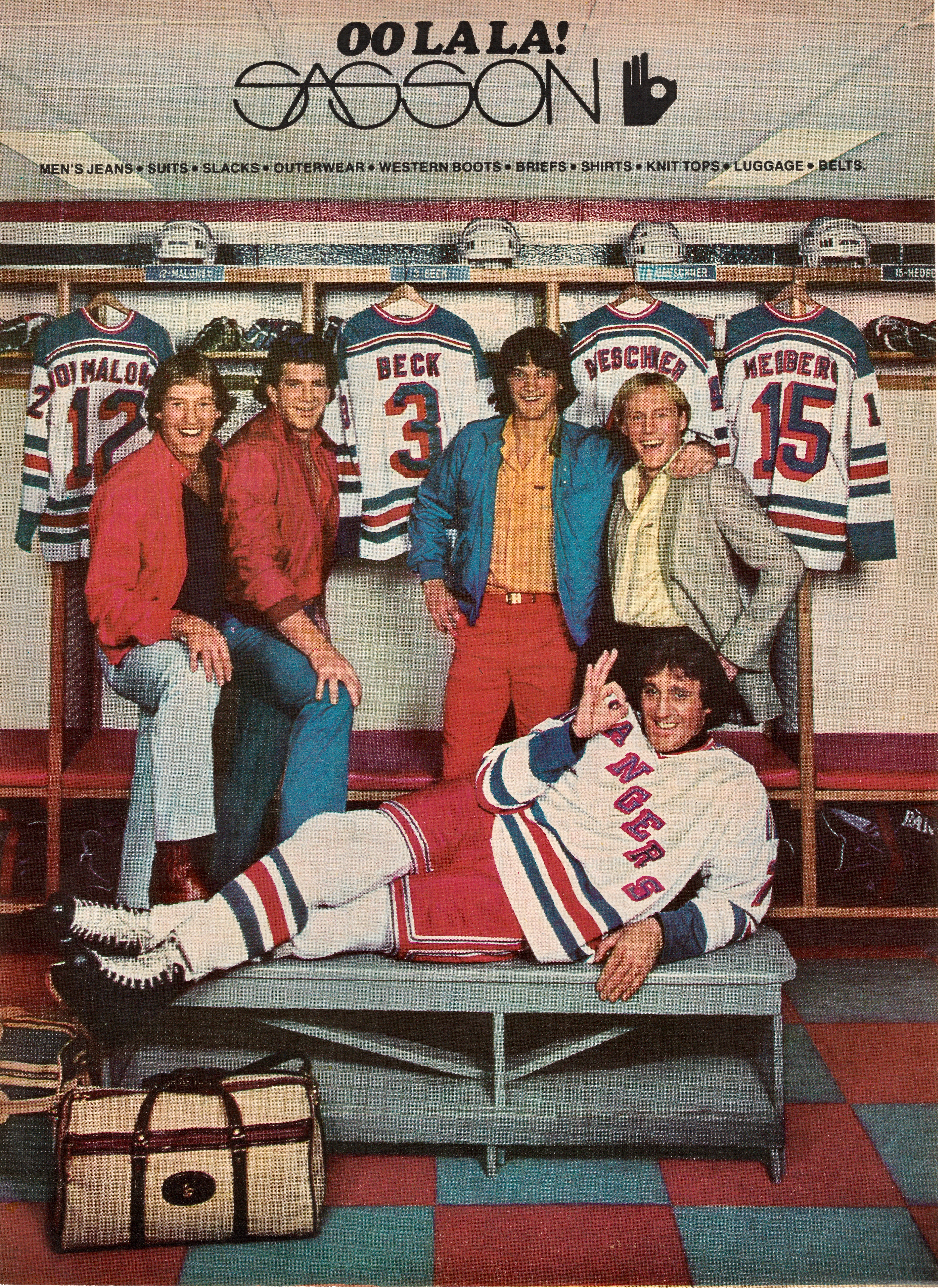 SpokesPhil: Born on a Friday of this date in 1942 in Sault Ste. Marie, Ontario, Phil Esposito is 77 today. In 1981, when he laid himself out in the name of Sasson and their slacks, knit tops, and luggage, it was in the company of New York Rangers teammates Don Maloney, Barry Beck, Ron Greschner, and Anders Hedberg. The campaign included TV commercials, too, and if haven’t seen those (here they are), they’re worth the wince.