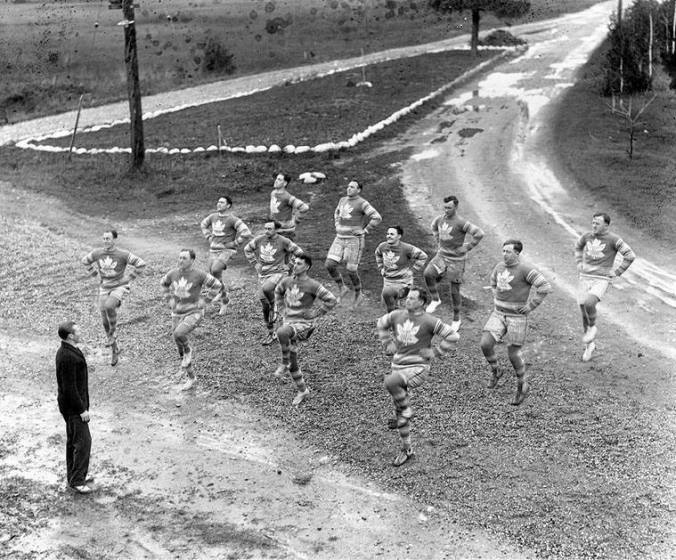 Originally published in The Globe and Mail, on Saturday, September 27, 2014, on page S2.

In the famous photograph, the Leafs jig.

We can laugh, easy for us, but this is serious business, as it always is for Toronto’s hockey team this time of year, the season for the earnest, eternal calisthenics of trying to figure out how to get back into the playoffs. If that requires legendary Leafs with names like Day and Bailey to caper in full hockey garb when their skates and sticks are back home, a couple of hours away — who are we, really, to scorn that?

The year was 1928, and for the Leafs then it was the old story that’s still so familiar: in the spring, they’d missed the post-season again. In the year since Conn Smythe had become one of the team’s owners as well as manager and coach, they’d switched names (St. Patricks to Maple Leafs) and colours (green for blue). On the ice, injuries dogged the team’s season and despite a spirited March, the Leafs didn’t qualify to play for the Stanley Cup in April.

Smythe spent the summer retooling. That and running his sand and gravel business. On the non-aggregate side, he sent Butch Keeling to the New York Rangers for $10,000 and winger Alex Gray. To the defence he added Jack Arbour’s seasoned weight. He recruited junior stars Shorty Horne (a “clever and tricky” stickhandler) and tall Andy Blair, who reminded some of a young Hooley Smith.

There was worry that August that he’d have to retire: in February, an errant skate had nearly severed his Achilles tendon. A heavy loss it would have been: Day was a dominant defenceman, and durable — Frank Selke said that because he didn’t smoke or drink or touch tea, coffee, or chocolate, he could play 60 minutes a game. He toiled hard over the summer, in the office at C. Smythe Limited by day, skating every evening at Ravina rink. By September, he was ready to go. END_OF_DOCUMENT_TOKEN_TO_BE_REPLACED