We extend our condolences to the family & friends of five-time #Oilers Stanley Cup champion Chief Scout Barry Fraser, who passed away in Edmonton this morning. pic.twitter.com/l954KiTeQ9

Sorry to see yesterday’s news that former Edmonton Oilers chief scout Barry Fraser has died at the age of 82. Condolences to his family. He was a son of Kirkland Lake, Ontario, who truly was one of the key architects of the juggernaut that the Oilers became in the 1980s.

“As Barry Fraser goes, so go the Edmonton Oilers,” Edmonton Journal columnist Terry Jones wrote in 1979, just as Fraser took up with the team (he stayed on until 2000). It was August of that watershed year, and Oilers were crossing over from the newly defunct WHA into the NHL by way of the entry draft. The team already an 18-year-old Wayne Gretzky aboard, but the future, still, was decidedly murky.

“Scouting,” Oilers coach and director of hockey operations Glen Sather was saying, “is going to be as important to this team as coaching in the next few years.”

“We won’t know if Fraser is a blooming genius or a silly fool,” Jones opined on the same Journal page that listed the players Edmonton secured that day:

In 1980, the Oilers drafted Paul Coffey, Jari Kurri, and Andy Moog. The following year they snagged Grant Fuhr. By 1983, of course, they were playing in their first Stanley Cup final in 1983. “I don’t know how to even describe it,” Fraser said that year. “It’s a great feeling when you start from scratch and all of a sudden you’re on the doorstep.” As director of scouting and player personnel, Fraser would get his name on the Cup five times, in 1984, 1985, 1987, 1988, and 1990.

Peter Gzowski included a memorable sketch of Fraser in The Game of Our Lives (1981):

Fraser is a deceptively naïve-looking man who, with his pompadour and generous belly, resembles a contented Elvis Presley. His own playing career stopped in B, when he broke a leg while trying to make a team in Cochrane, Ontario. After his injury, he retired to an office job with Ontario Hydro, but he maintained his interest in hockey by coaching young boys, and gradually the canny reports he sent in on prospects from his neck of the woods drew so much attention that he was swept into full-time scouting, ending up as a senior official of the Houston Aeros of the WHA. By the time the WHA folded, he had achieved such a reputation as a bloodhound that Sather snapped him up to head the Oilers’ scouting staff. Kevin Lowe, who had been the first draft he recommended, had worked out well, but the 1980-81 season would be a full test of Fraser’s powers of discrimination; it was on his word that the Oilers had spent their valuable first-round draft choice on Coffey, had courted Anderson, and had gambled yet another draft choice on being able to talk Jari Kurri into coming to North America. It was on his system, which Sather had urged him to perfect, that the future of the team and its young personnel would depend. 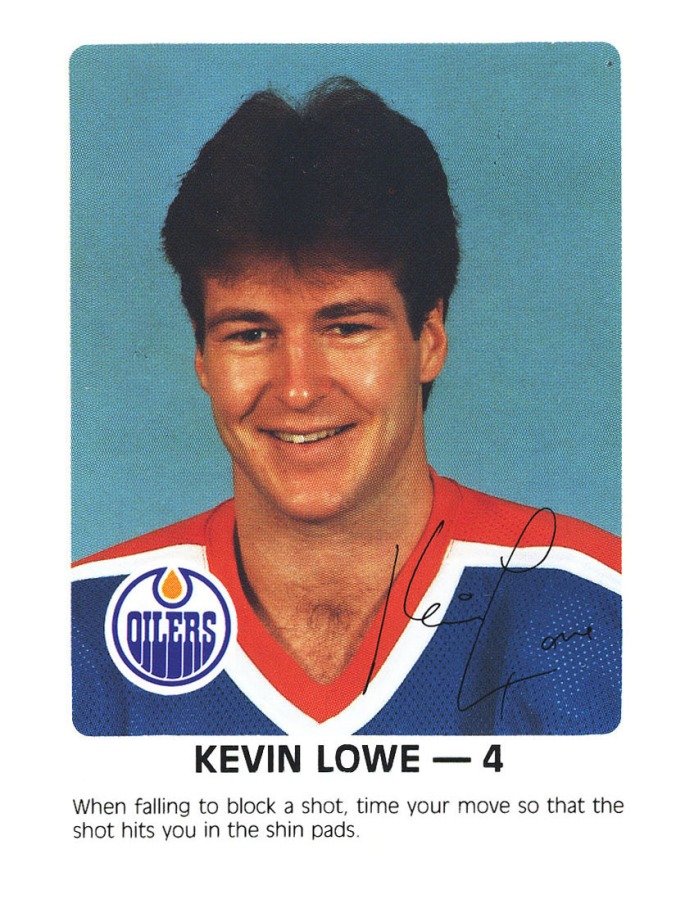 Kevin Lowe gets into hockey’s Hall of Fame next week; tonight the Edmonton Oilers raise his number 4 high into the rafters of Rogers Place ahead of their game against the New York Rangers. Lowe played his steady defence for the Oilers back in the heady ’80s and ’90s, winning five Stanley Cup championships in teams that featured Gretzkys and Messiers, Coffeys and Fuhrs. Born in Lachute, Quebec, he played 15 seasons in Edmonton in all, another four with the Rangers. He won another with New York in 1994. He’s 62 now; his number is the eighth the Oilers have honoured, after Al Hamilton’s 3, Coffey’s 7, the 9 Glenn Anderson wore, Messier’s 11, Jari Kurri’s 17, Fuhr’s 31, and Gretzky’s 99.

May 18 was a Wednesday in Helsinki in 1960, as it was elsewhere, too, but never mind them, it’s Finland we’re interested in here, for the purpose of observing Jari Kurri’s 60th birthday — here’s to him. His high-scoring, Hall-of-Fame career included stints right-winging for Jokerit and with Los Angeles, the New York Rangers, Anaheim, and Colorado in the NHL, though of course it was as an Oiler in Edmonton, often at Wayne Gretzky’s side, that he had his heydays. He won five Stanley Cups and a Lady Byng Trophy, captaining the team to … wait, what? Kurri captained the Oilers?

Well, no, not according to the team’s own accounting. Doesn’t seem quite right to me, but the fact remains that you won’t find him listed in the list the Oilers make available in their media guide. There and in most other listings, you’ll see that in Kurri’s decade as an Oiler, four non-Finnish players wore the C: Blair MacDonald, Lee Fogolin, Gretzky, and Messier. But it’s true, too, that in the fall of 1988, captain Messier was suspended for six games for the damage he did with his stick to several teeth belonging to Rich Sutter of the Vancouver Canucks. During Messier’s absence, Kurri wore the C. He did it with aplomb, too, scoring a hattrick against Pittsburgh in his debut as skip, and leading the team to a 5-1 record overall. Is that service not deserving of, I don’t know, some sort of recognition or, um, asterisked notation in the Oiler annals? An added oddment: Kevin Lowe and Glenn Anderson were Edmonton’s assistant captains for the 1988-89 season. Kurri didn’t get an A until the following year, his last with the team, when he replaced Anderson. So when Kurri got his (brief) battlefield commission in ’88, he was promoted from the ranks. 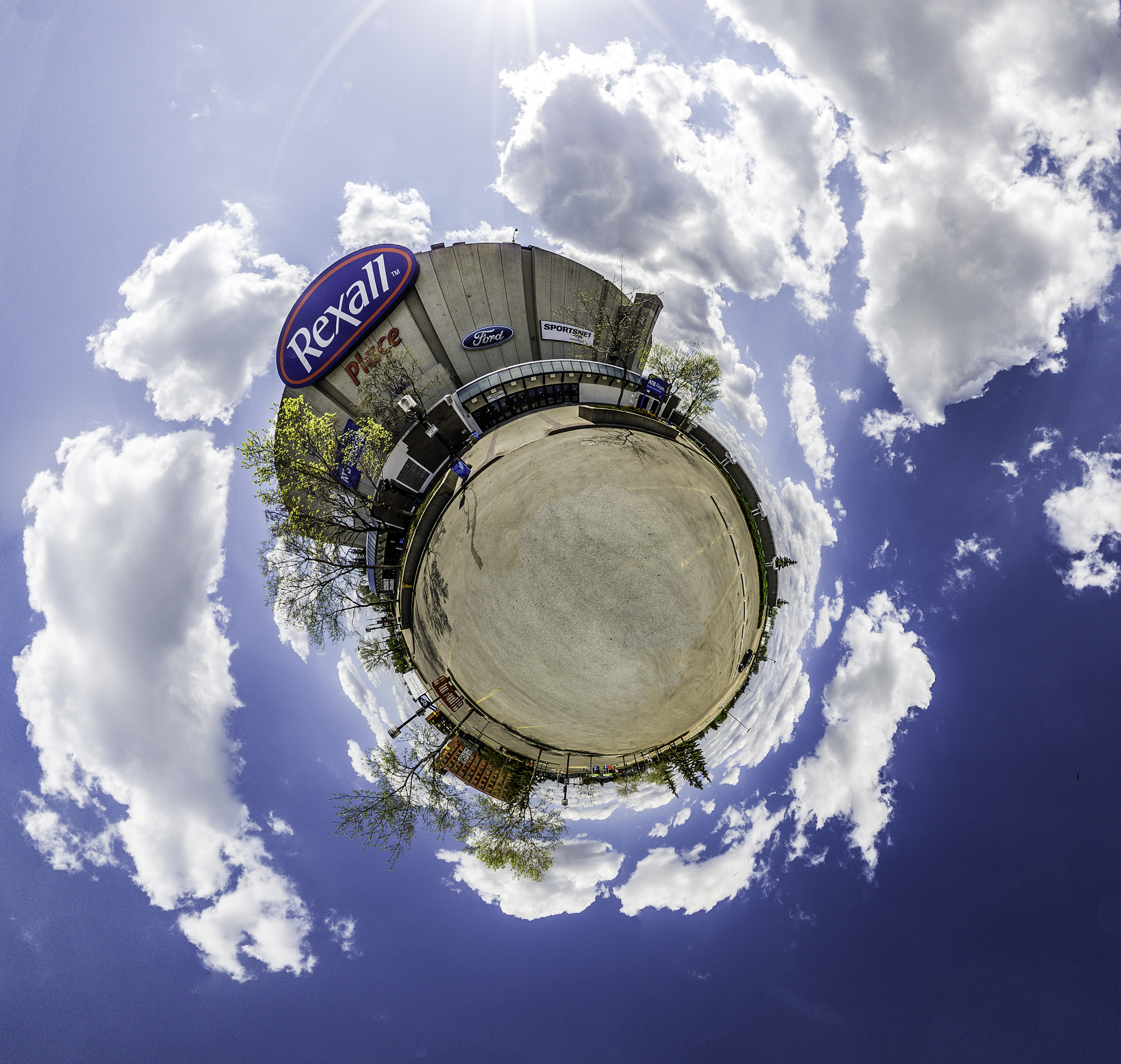 Once, when it was still Northlands Coliseum, the Edmonton Oilers that called the rink home won five Stanley Cups in  seven years. The rink has another name now, Rexall Place, and the Oilers that have skated there recently haven’t reached the playoffs let alone gone all the way, but the old rink still has its history if not much future. Tonight, as the team plays its last game in the old barn, which opened in November of 1974, 150 erstwhile Oilers, players and staff, will be on hand to see their underachieving successors host the Vancouver Canucks. The guest list features Wayne Gretzky, Mark Messier, Paul Coffey, Grant Fuhr, Jari Kurri, Glenn Anderson, Ryan Smyth, and Dave Semenko, along with several members of the WHA old guard, including Al Hamilton and Eddie Mio and Ron Chipperfield. The Oilers will open next season at their new $480-million home, Rogers Place.

(Photo, from 2012, courtesy of Kurt Bauschardt, whose work you’ll find on flickr)

The Edmonton Oilers published a cookbook during the 1980-81 season as fundraiser for the Evelyn Unger School for Language and Learning Development. I don’t know what they were selling it for, but I can report that the cerlox-bound, 62-page epic includes everything you need to know to whip up Jari Kurri’s Karelian Ragout, Glenn Anderson’s Cherry Cheese Cake, and/or a Kevin Lowe Tourtiere. Not to mention:

“It’s a good squad over there, from the back all the way up,” Vancouver’s Brandon Prust was saying yesterday, ahead of his team’s meeting with Montreal tonight. “They’re off to a good start and we’re going to try and ruin it for them.”

Prust, a rebarbative winger, used to play for the Canadiens, until he was traded west in the summertime, so I guess that under the law of sports narratives, he has something to prove. If he scores the goal that beats Montreal, will that have proved whatever that something might be? What about if he gets into a fight?

The start to which Prust was referring involves the numbers 9 and 0 and 0. It has the writers of news headlines warming to words like sizzling (The Windsor Star) and red-hot (Sportsnet.ca) and, today, (The Gazette) making history and winning juggernaut.

If the Canadiens do prevail tonight, they will match a feat achieved only twice before in NHL history. The Buffalo Sabres went 10-0-0 in the first weeks of the 2006-07 season, as did the Toronto Maple Leafs to get the 1993-94 season underway.

I probably don’t have to mention that neither of those teams won a Stanley Cup to end off those bright-dawning seasons. This year, the Canadiens are doing their best not to get ahead of themselves. “We haven’t accomplished anything yet,” Brendan Gallagher, a winger with nettlesome qualities of his own, was telling Postmedia columnist Cam Cole yesterday. “Hopefully by the end of the year we’re where we want to be. But that’s too far down the road to think about right now.”

“I know people will talk about records and all that stuff,” said P.K. Subban in Cole’s Vancouver Sun preview, “but we’re not focused on going 10-for-10. We’re not going to be the ones leading that parade. I’ve said it before and I’ll say it again: all we’ve accomplished is to have a good start to the season.”

In 1993, when the Leafs beat Chicago to record their tenth straight victory, winger Glenn Anderson was a little more unguarded. “Ten in a row,” he said, “wow. That’s going to be a tough one to beat. I’m just speaking for myself, but there’s no way I thought this team could get off to a start like this. It’s all heart, desire and dedication that’s getting us through, because the talent we have is nowhere near what some other teams have.”

The Canadiens were the ones to end the Leafs’ streak that year, with a 5-2 victory at the Forum. A few days earlier, Montreal had put an end to the New Jersey Devils’ eight-game winning streak, too, beating them 2-0. According to New Jersey coach Jacques Lemaire, the decisive factor was Montreal goaltender Patrick Roy. “He’s the best goaltender in the NHL,” the former Habs’ centreman said, “and he proved it again tonight.”

Apropos nothing other than the program cover depicted above, the 1970-71 Canadiens won the Stanley Cup in a season they started with a mere four successive wins. They then lost three, tied, won another, before meeting Vancouver in the tenth game of the season. That October night, the Canadiens beat the visiting Canucks, 6-3.