“Your Eating And Meeting Place:”  A 1955 postcard from the Warwicks’ own Commodore Cafe at 314 Main Street (across from the Post Office) in Penticton, B.C. “We have found wonderful place,” the printed script on the back reads, “where they serve delicious food, midst pleasant surroundings.”

“We outsmarted them, outskated them, and outplayed them.” That was Bill Warwick in March of 1955 when, as a 30-year-old left winger, he helped Canada overthrow the mighty Soviet Union to win gold at the World Championships in West Germany.

Born in Regina, Saskatchewan, on a Monday of this date in 1924, Bill Warwick was the middle-born of three Warwick brothers who powered the Penticton Vs that year in Europe when they donned the maple leaf on the nation’s behalf. Grant, the eldest, was the coach and also a right winger; Dick, the youngest, played centre. Grant had a nine-year NHL career behind him that saw him skate for the New York Rangers as well as the Boston Bruins and Montreal Canadiens. Bill’s stay in the NHL was briefer: he played 14 games with the Rangers over two seasons in the mid-1940s.

It was as the 1954 Allan Cup champions that the Vs had won the right to represent Canada at the World Championships. They had a serious job to do there: restore the nation’s honour by claiming back the world title that the East York Lyndhursts had surrendered the previous year to the Soviets.

Canada launched its campaign with a 12-1 win over the United States, with Bill Warwick pitching in for six goals. He quickly became a focus for his off-the-puck activities, too: a couple of games further into the tournament and the Canadian Press was reporting that German sportswriters had dubbed him The Sinnerand that there was no other player that local fans liked to boo more.

To an American reporter who asked him what their problem might be, Bill said, “Well, I’m not the gentlest guy in the world.”

“In him,” CP reporter Arch MacKenzie elaborated, “European fans tend to see the personification of all they think is bad in Canadian jockey, and they let him know.”

“They shouted when the rugged, black-haired winger capered down the ice after scoring a tying goal in the 5-3 victory over the Czechs last Saturday night, they booed when he danced a jig during the playing of ‘O Canada’ and they bellowed their delight when Bill took a prat fall at center ice Monday night against the Finns, who were swamped 12-0.”

“Warwick sat on the ice, drinking in the clamor, and then waved affably to the crowd. That touched off a new round of noise.”

Canada romped on through the schedule, sacking the Swiss 11-1, whelming the West Germans 10-1, before they met up with the also-undefeated Soviets in Krefeld. Anchored in net by Nikolai Puchkov, the defending champions were led upfront by Vsevolod Bobrov, the man who’d end up coaching his country’s team during the 1972 Summit Series.

Warwick scored a pair of goals as the Canadians skated to a 5-0 win to take the championship. In Canada’s eight games, he notched 14 goals and 22 points to lead all scorers. He was recognized, too, as the tournament’s top forward.

Wild Bill: A German cartoon commemorates the swath Warwick cut through Europe during the 1955 World Championships. 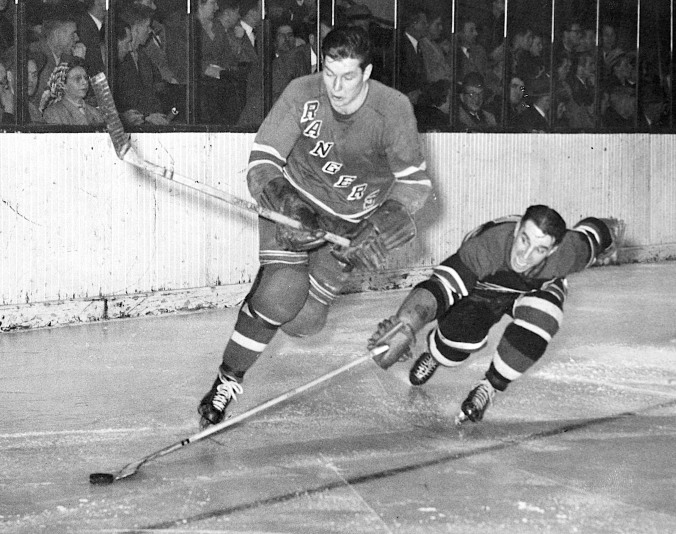 Low Poke: Chicago’s Doug Bentley reaches for Pentti Lund’s puck in a game at New York’s Madison Square Garden in December of 1949. “The game was a spotty one,” opined The New York Times next day, “with long sessions of aimless puck chasing interrupted by brilliant individual sallies. Still, the outcome proved satisfactory to most of the 9,174 spectators.” New York won, 2-1.

The New York Rangers eventually lost to Chicago in the Stanley Cup semi-finals in 1971, but they had some big wins along the way. One of them included a hattrick by centre Vic Hadfield, the first to be notched in the playoffs by a Ranger since Pentti Lund managed it. “I remember Lund,” Jean Ratelle said after the game, Hadfield’s linemate. “From the bubblegum cards I had as a kid.” Hadfield: not so much. “I never heard of Lund,” he said. “How long ago did he do it?”

It was the spring of 1950, in fact, which is worth recalling, with word today from Thunder Bay today that Lund has died at the age of 87. The second Finnish-born player to make a mark in the NHL, those who do remember him in New York know that he not only won the Calder Trophy as the league’s outstanding rookie in 1949, but Lund’s hattrick the following year almost — it was close — helped the Rangers win a Stanley Cup, too. END_OF_DOCUMENT_TOKEN_TO_BE_REPLACED