Dangler: Sweeney Schriner in his Maple Leafing days. “A picture player,” Conn Smythe called him. “He provokes the enemy, fascinates the unprejudiced observers.”

I don’t know how many tirades, total, Don Cherry launched last night on Hockey Night in Canada, I just caught the one, after the early games had come to an end. Vancouver had baned Toronto, barely, 2-1, while in Montreal, Canadiens scourged Detroit 10-1. Winger Paul Byron scored his first NHL hattrick in the latter, and all his goals were speedy. Highlights ensued as Cherry and Ron MacLean admired his fleety feet.

Cherry: Look at how he outskates guys. I mean, this guy can really … skate … dangle, as they say. I’m, a, now watch …

MacLean: Now, let’s be clear, when you say dangle, you mean he can wheel.

Cherry: [Irked-more-than-usual] I’m saying he can … Everybody knows that played the game for a long time, dangle means … And [thumbing at MacLean, about to refer to incident that nobody else has knowledge of] you remember John Muckler comin’ in, sayin’, what are you, nuts, skates fast. The guys that are in the game now, they really don’t know the game, I’m not getting’ into that …

Anybody that says dangle and it’s “stickhandling” doesn’t know the game. I just thought I’d throw that in.

So. Interesting discussion. To recap: Don Cherry is ready to go to vocabulary war with anyone who doesn’t agree that there’s only one true hockey definition for a fairly common word, and it’s not the one that most people think it is, which proves how ignorant they are, i.e. very.

Cherry’s correct on this count, at least: dangle has long been a word in hockey referring to the speed with which a player skates. Here, for instance, is the venerable Vern DeGeer, Globe and Mail sports editor, writing in 1942:

Sid Abel, the talented left-winger for Detroit Red Wings, watched Saturday’s Bruins-Leafs game from the Gardens press box … Sid did not attempt to conceal his open admiration for Syl Apps, the long-striding speed merchant of the Leafs … “I think most players are pretty well agreed that Apps can dangle faster than any skater in the league,” said the observing Sid …

And from Bill Westwick of The Ottawa Journal in 1945, talking to Billy Boucher whether Maurice Richard was as rapid as Howie Morenz:

He takes nothing away from Richard. “He can dangle, breaks very fast, and is a top-line hockey player. But they can’t tell me he moves as fast as Howie. I’ve yet to see anyone who could.”

On the other side — what we might call the anti-Cherry end of things — most recent dangles you’ll come across, in print or on broadcasts, involve a player’s ability to manipulate a puck. If you want to go to the books, Andrew Podnieks’ Complete Hockey Dictionary (2007) mentions skillful stickhandling in its dangle definition, and The Hockey Phrase Book (1991) concurs.

As does Vancouver captain Henrik Sedin. “You know what,” he was saying in 2015, talking about then-Canuck Zack Kassian. “He can dangle and make plays.” A year earlier, Detroit defenceman Brendan Smith had a slight variation as he hymned the praises of teammate Gustav Nyquist: “He’s a hell of a skater, he’s a great puck-mover, he makes great plays, he’s got great skill, he can dangle you, he’s hard to hit, he’s wormy or snakey, whatever you want to call it.”

Can we agree, then, even if Don Cherry might not, that dangle has more than one hockey application? Is that a compromise we can get behind without further hoary accusations regarding who and who doesn’t know the game.

The dictionaries, it’s true, need to make room for Cherry’s definition alongside theirs.

On the other side, it’s not as though Cherry’s sense of the word is the original or even elder one. In fact, as far back as 1940 you can find The Ottawa Journal using dangle to mean stickhandling. And here’s Andy Lytle from The Toronto Daily Star jawing with Conn Smythe that same year about some of his Leaf assets:

He waxed lyrical over [Billy] Taylor whom he calls “a player with a magnificent brain” and [Sweeney] Schriner whom he says emphatically and with gestures is the best left winger in the game today.

“Schriner,” he enthused, “ is the maestro, the playmaker deluxe who is so good he can distribute his qualities amongst [Murph] Chamberlain and [Pep] Kelly until they too play over their heads.”

“Dangle it,” exclaimed Conny, now thoroughly stirred, “I tell you I’ve never seen anything comparable to his play for us in Detroit last Sunday night. It was a revelation in puck-carrying. He was the picture player. He isn’t like Apps going through a team because Schriner does it with deliberate skill and stick trickery. He provokes the enemy, fascinates the unprejudiced observers. Apps is spectacular, thrilling because of his superlative speed. Schriner is the same only he does his stuff in slow motion so everyone can enjoy him.”

In other words, Apps may have been able to dangle, but Schriner could dangle. 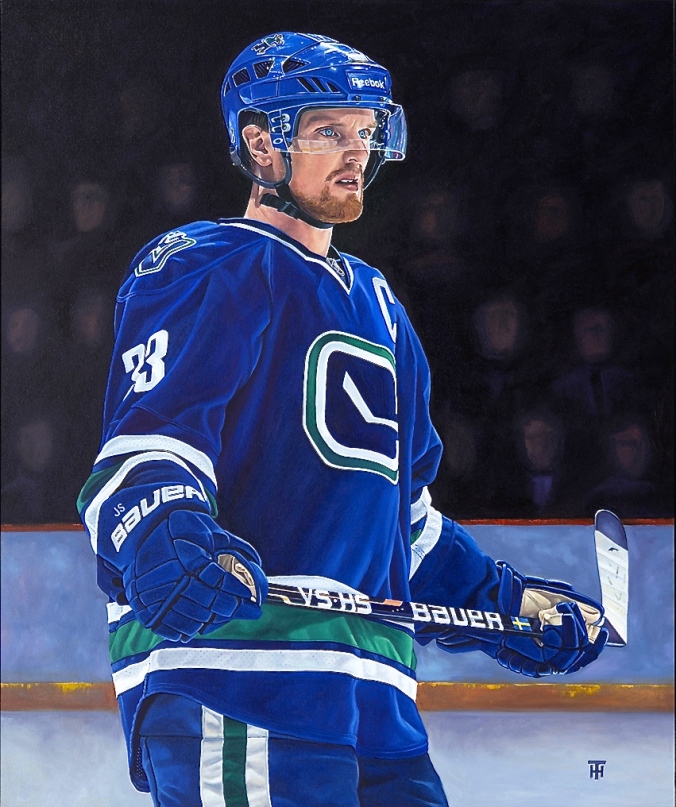 Tony Harris tells the story of illicitly drawing constant Tony Espositos when he should have been taking notes as a school kid in Lakefield, Ontario: that’s where his career as an artist started. Today, Harris, who’s 49, ranks as one of Canada’s foremost painters of athletes as well as the landscapes they inhabit. His early Espositoing had a practical side, too: Harris was a young goaltender himself, who went on to play in the OHL for the Kingston Canadians in the 1980s. As a hockey painter, his subjects have included Roger Nielson, Ted Lindsay, Zdeno Chara, Chris Phillips, and Daniel Alfredsson, among many others — no further Espositos, yet.

His latest NHL commission came back before Christmas when Vancouver got in touch about Henrik Sedin. “It has to be a good portrait,” Harris was saying this week from his studio in Ottawa, “that’s the first thing I think about. Take away the hockey, out of the rink, is it a good likeness? I want the player to look like he could step out of the painting and engage you.” He prefers to paint a player in repose, he’s said, “between whistles,” rather than in mid-slapshot, “so there’s a little bit of attitude, a little bit of thought of what’s going to happen next.” The Sedin portrait, he estimates, was 75 hours in the making. A week after he’d finished, in mid-March, Harris flew it west, framed if not completely dried. Henrik, who’s 33 and scarce minutes older than his twin, Daniel, played his 1,000th NHL game in Winnipeg on March 12.

In a ceremony on March 23, before a home game against Buffalo, Harris watched from a high Rogers Arena box as the Canucks’ marked the occasion in a pre-game ceremony in which the portrait was unveiled. The night ended with good news: the Canucks won the game, 4-2, though not before Henrik had to leave, in the second period, with an injured leg. “I went to hit a guy and he came back off the boards and he fell on top of me, so we’ll see how it is tomorrow,” he told reporters after the game. “I’m not declaring anything. We’ll see how it feels tomorrow and go from there.”

A later word was that he’d be off the ice for about two weeks. 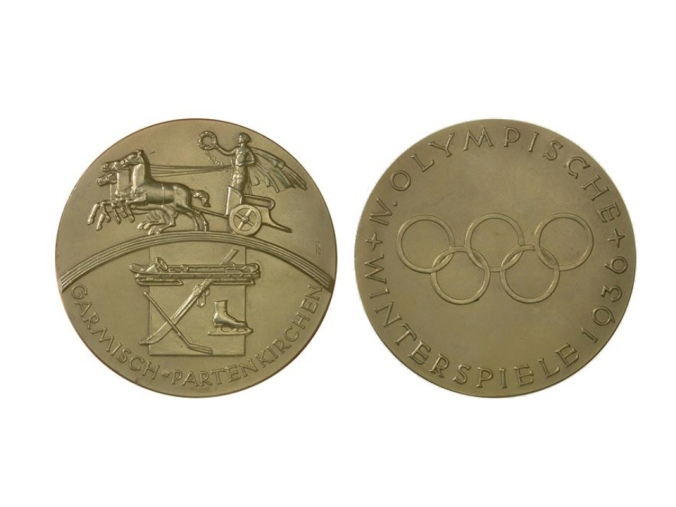 Medalsome: Garmisch gold, front and back, from the 1936 Winter Olympics.

“Please join me in celebrating 41 years of not giving a damn about the Winter Olympics,” tweeted writer Gary Shteyngart this week.

Or … maybe not. Alex Ovechkin, for one, was watching his TV on Friday as Russia’s games officially opened while also (if his punctuation is any guide) leaping around the room as he tweeted:

Ryan Kennedy from The Hockey News heard Buffalo goalie Ryan Miller talking about the MVP award he won at the 2010 Olympics in Vancouver. “It’s not like I can stack it behind me in net,” Miller was saying. “It won’t deflect pucks.”

Just as he did in those Olympics, Sidney Crosby scored a great goal on Miller this week, in Pittsburgh’s game against Buffalo. Fellow Penguin James Neal: “It took my breath away, yeah.”

Another famous American goalie was talking about Canada’s team this week: Jim Craig from the golden 1980 team. “I think Marty St. Louis should have been given the opportunity to represent his country,” Craig opined. “He is a winner, leader and class act.”

That was before the announcement, on Wednesday, from @HockeyCanada:

“It was a little shocking,” Stamkos said of learning that his leg hasn’t healed enough for him to play.

The inimitable Dave Bidini posted a first dispatch as Hockey Canada’s commentator on the Olympic tournament, which he’ll be contributing from … in front of his TV, at home in Toronto. “Last Olympics,” he wrote this week, “my kids heard their grandfather swear for the first time.”

Reports of Canucks coach John Tortorella’s return this week from 15 days of suspension included the words “I apologize” and “my stupidity” and “very embarrassing” and “the nonsense I caused.” Time to move on, Tortorella told reporters. “I’m glad I’m back with our guys,” he said. “I’m looking forward to trying to grow more as a coach with them. More importantly, get our team growing together again to be a competitive team.”

Publisher Kevin Hanson: “Tie Domi fought his way into the hearts of hockey fans and sustained a memorable career through leadership and grit, loyalty and humility.” END_OF_DOCUMENT_TOKEN_TO_BE_REPLACED