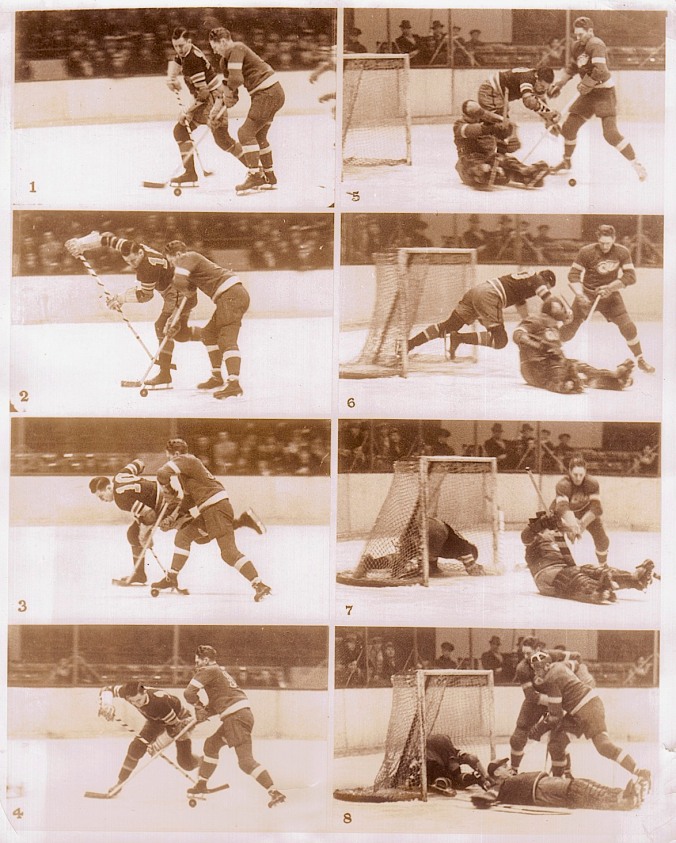 Detroit was up on top of the American Division in the first week of January, 1936, ahead of the Rangers by a point when they went to New York to play. Ten thousand were there to watch. Despite the Red Wings’ tendency to defend, the clash was exciting enough. That’s what Joseph C. Nichols wrote in The New York Times: clash, exciting, enough. He said that Ching Johnson, from Winnipeg, was sterling on defence for the home team, and in attack, too, and came within an ace of tying it. But that was late in the third period. First, earlier, Pete Kelly from St. Vital, Manitoba, scored for Detroit. The Blue Shirts were pressing — charged without stint. Frank Boucher, from Kemptville, Ontario, was in on this, with Cook brothers on the wings, Bun and Bill, from Kingston. They couldn’t break down Detroit’s Normie Smith (Toronto): he wouldn’t break. Herb Lewis (Calgary) added a second goal for the Red Wings with Johnson on the penalty bench for hooking. This was the second period now. Then, this: Ranger Butch Keeling dashed in across the Detroit line. He was from Owen Sound; that’s him, above, with the part in his hair and the stripy-taped stick. Pete Kelly is with him. Caught by a camera called a magic-eye, this whole sequence lasted just a few seconds. Mix-up is the word in the original caption for what happened: Kelly barged Keeling into the net, Normie Smith, in his cap, got the puck. I’m pretty sure that’s a young Bucko McDonald from Fergus, Ontario, in the last frame, with the helmet. Kelly went off for holding. Nichols:

The Rangers moved all their skaters forward. After several futile thrusts had been directed at the net, Johnson took Brydson’s pass and scored in 11.29.

Glen Brydson that would be, from Swansea, Ontario. 2-1. In the third, the Red Wings iced the puck when they could, which worked. The Rangers had some chances: Johnson by the post; Keeling on a long drive; a couple of hard raps from Bill Cook. That’s all, though.