The hockey tournament at the 1932 Winter Olympics was an intimate affair, with just four teams taking part. Joining the United States and Canada on the ice at Lake Placid, New York were teams from Germany and Poland. Posing here above is forward Wlodzimierz Krygier, captain of the latter. Scouting for The Winnipeg Tribune just before the pucks plummeted in early February, Paul Warburg advised that “Poland has improved remarkably in hockey, but their likelihood of being a serious contender to either the Canadians or United States teams is small.”

And so it proved. The Poles opened their account with a pairs of losses, 2-1 to Germany and 4-1 to the hosts from the United States. The Winnipeg Hockey Club was wearing the maple leaf in ’32, and on February 7 the Tribune’s Ralph Allen was on hand to watch “the valiant but futile Polska outfit” show its stuff. It turned out “a nice, easy workout for the Canadians,” Allen reported, who “showed lots of speed and combination when they felt like uncovering it.” Poland played cautious, “adopting a packed defence whenever possible,” and for the first ten minutes the ’Pegs were duly stymied. Eventually they found their way to a 9-0 win. Allen thought they could have netted more in the third period, if they’d felt like it. Leading the way for the Canadians were Romeo Rivers, Walter Monson, and Hack Simpson, who all scored a pair of goals each.

The Poles dropped another game to the U.S. by a score of 5-0. They lost again to Germany, too, 4-1, in a game featuring flurries of high sticks. Somehow, Ralph Allen reported, only two players were injured, including Polish goaltender Josef Stogowski, who suffered “a bad gash under the eye from the stick of a teammate;” the game was paused for ten minutes while he was patched.

When the Poles faced Canada again two days after their first encounter, Winnipeg’s eventual gold medallists showed their restraint by keeping the score to 10-0. Every Canadian player but goaltender Stanley Wagner notched a goal this time around, though they had to work for it. Ralph Allen:

Everything went along smoothly until it was nearly time to go home to supper, and someone discovered that Kenny Moore and Stoney Wise hadn’t had their turn at hitting the button. So everybody joined in and lent a helping hand to the victims of this shocking though unwitting neglect. Kenny and Stoney got their goals, and everybody was happy.

Not a full biography, faulted Daniel Okrent in May, appraising for The New York Times Book Review the big new book by (quote) our matchless master of popular history. I guess by our he means America’s, though could possibly be humanity’s, too. Anyway, the book, David McCullough’s The Wright Brothers (Simon & Schuster) sounds good, even if our/their/everybody’s august historian is interested in only one thing, namely how it was possible that two autodidacts from Ohio managed to satisfy a longing that that the species had harbored for centuries.

In this singular pursuit (Okrent declares), the master soars, and with an empathy and fluency that’s uncommon.

Which is good to hear. What Okrent doesn’t mention in his Times review is how McCullough does when it comes to that crucial episode in the history of the Wright Brothers and indeed of human flight, i.e. Wilbur’s hockey accident.

Without it, we’d all still be earthbound. You could argue that. Would you? Would I? Not with any real enthusiasm. The fact that Wilbur Wright took a hockey stick to the mouth in the 1880s is one link only in a long chain of events that put him in the air in Kitty Hawk, North Carolina, in December of 1903. I don’t think there’s any dispute: upper-body injury or no, the brothers Wright were going to fly one way or another.

The hockey link leads back to the winter of 1884-85 (though I’ve also seen it as 1886) on a lake (that may have been a pond), although the hockey actually might have been closer to the old shinny than the hockey we know today, and that the sticks they were using may or may not have been more like bats. Either way, I think we can all understand what Elmo Scott Watson means when he says, as he did The Walnut Grove Tribune in 1930, that whatever game they were playing, there was a melee.

So Wilbur was a brilliant student, a star high-school athlete at the time we’re talking here. He was the third-born of five Wright children, aged 17 in the winter in question. This was in Dayton, Ohio, on a pond/lake adjoining the Dayton Soldiers’ Home.

Wilbur was smashed in the face with a stick, knocking out most of his upper front teeth.

As hockey injuries go, it’s familiar as it is painful-sounding and Bobby Clarke-reminding. Wilbur was treated at the scene by an army surgeon, as John R. McMahon tells it in his book, The Wright Brothers, Fathers of Flight (1930). The opposing team, he also elaborates, was composed of the sons of army officers. And:

He refused the offers of a ride home, saying that he would walk lest it frighten his mother if he were carried home.

While McCullough misses that detail, he and McMahon do coincide in most of what happened next.

For weeks he suffered excruciating pain in his face and jaw, then had to be fitted with false teeth. Serious digestive complications followed, then heart palpitations and spells of depression that seemed only to lengthen. Everybody grew more and more concerned.

There followed a long period of delicate health if not semi-invalidism, with a diet confined to liquids, eggs and toast. It seemed to every one that the boy was handicapped for life and none dreamed of the possibility of a great compensation …

The boys’ father, Milton Wright, was a bishop in the United Brethren Church. Wilbur’s plan had been to go to Yale and thereby, eventually, to follow in his father’s pious footsteps. His delicate convalescence put an end to the college talk. His brothers went out into the world, travelled, married. Wilbur stayed home with his parents. For three years he was more or less a recluse, “cook and chambermaid,” as an older brother wrote, to his parents. In the seven years or so he spent fully recovering his health, he spent much of his time reading, worrying now and then about his lack of ambition. He eventually joined his younger brother in business, first at Orville’s printing press and newspaper, then at his bicycle shop. This is the period, in the 1890s, that they began to turn their attention in earnest to the effort of getting themselves off the ground.

What’s new from McCullough on all this is, at best, a footnote — but it’s a pretty sensational footnote at that. Where most previous accounts frame Wilbur’s injury as accidental and by the hand of an anonymous opponent, McCullough offers another view. Quoting Bishop Wright’s diary, he identifies the perpetrator as Oliver Crook Haugh, i.e. up there with Ohio’s most notorious all-time murderers, executed by electrocution in 1907 for killing his father, mother, and brother, and implicated in the deaths of perhaps a dozen others.

“At the time of hockey incident,” McCullough writes,

Haugh lived just two blocks from the Wrights. He was only fifteen, or three years younger than Wilbur, but as big as a man and known as the neighborhood bully. As would be written in the Dayton Journal following the execution, ‘Oliver never was without the wish to inflict pain or at least discomfort on others.’ 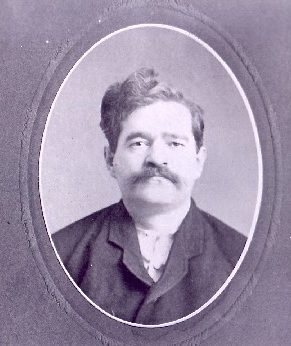 Oliver Haugh, photographed before his execution in 1907. (Photo: Ohio Department of Rehabilitation and Correction)

Haugh “threw the bat that struck Wilbur” is the phrasing in Bishop Wright’s diary. Did he have a score to settle with Wilbur, or was he just mean and/or carried his stick carelessly on the ice or — high? We’ll never know for sure, but as the old master writes in an unexpected coda to the hockey episode, it turns out the murderer-to-be did have a job working at a Dayton drugstore where the druggist, taking pity on the boy’s complaints regarding his painfully rotting teeth, gave him a popular cure of the day: “Cocaine Toothache Drops.”

Hard to say what lessons we can draw from all of this. Mouthguards might have helped, if someone had thought to invent them in time. It’s always a good idea, too, to try to keep the psychopaths off the ice. Unfortunately for Wilbur Wright, it was at this time, as McCullough recounts, that

young Haugh became so dependent on drugs and alcohol, his behavior so out of control that he had to be committed for several months to the Dayton Asylum for the Insane.