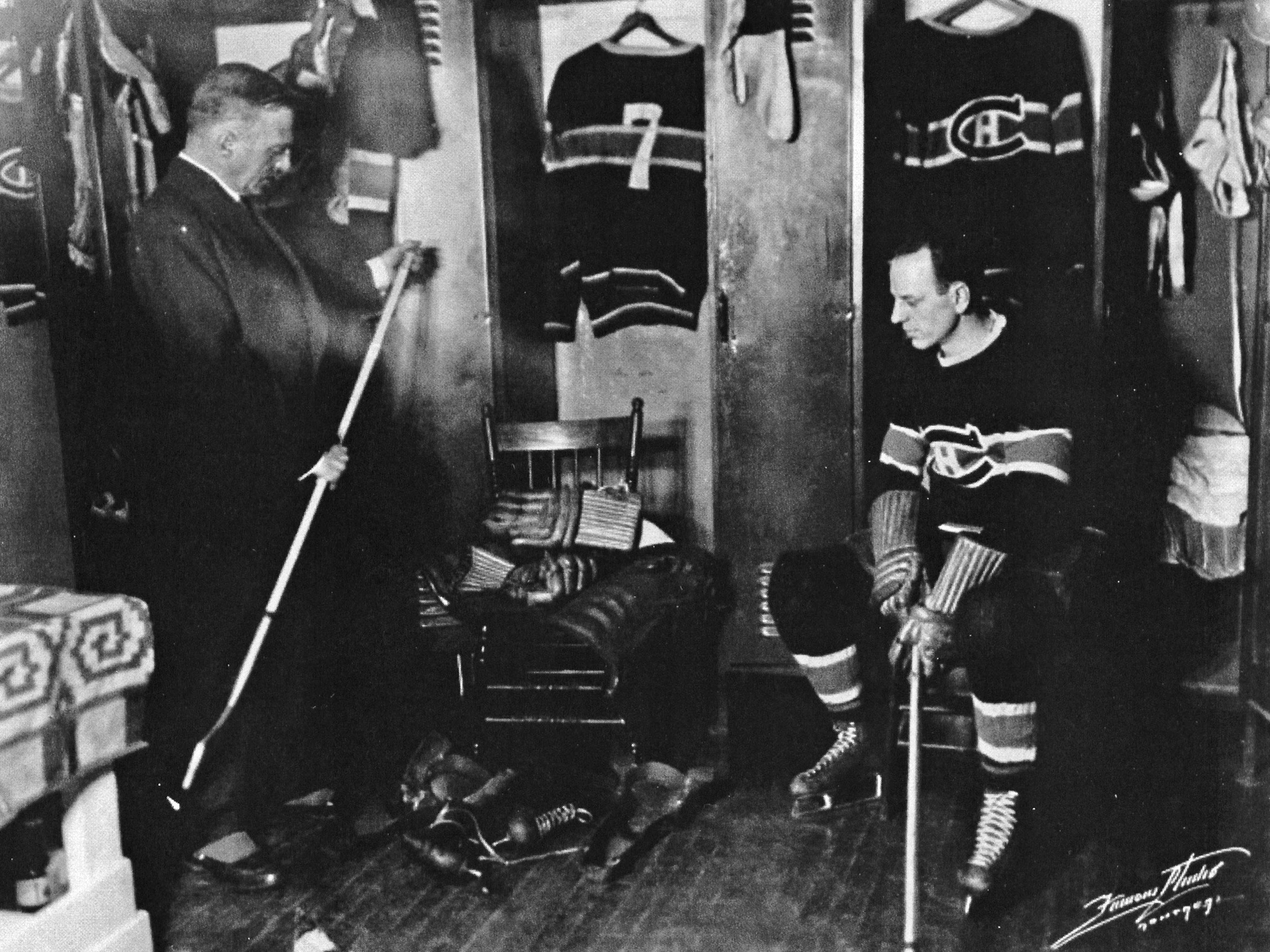 “I can’t talk about it,” said Cecil Hart, coach of the Canadiens. “It is terrible — a thunderbolt.”

It was 84 years ago, late on another Monday night of this date, that the great Howie Morenz died at Montreal’s Hôpital Saint-Luc of complications after he fractured his left leg in an accident at the Forum in a game against the Chicago Black Hawks at the end of January. He was 34.

Funeral services were held at the Forum three days later. Ten thousand mourners were on hand in the arena, and a crowd estimated at 15,000 thronged the route as the cortege made its way to Mount Royal Cemetery for the burial.

Two days earlier, on Tuesday, March 9, Morenz’s teammates somehow managed to get through their scheduled game against the Montreal Maroons. (The Maroons prevailed by a score of 4-1.) Aurèle Joliat, Morenz’s loyal left winger and his fast friend, was out of the line-up on the night with a leg injury, but he was back for Montreal’s Saturday-night meeting with the New York Rangers, wherein Canadiens prevailed 1-0 on a goal from Morenz’s long-time right winger, Johnny Gagnon.

That’s the night that the photograph above may well have been posed, showing Joliat and coach Hart gazing on Morenz’s forlorn gear. “The wait is in vain, the Meteor is extinguished,” read the caption above a version that ran on the Sunday in Le Petit Journal.

Leo Dandurand would tell the story that he’d been the one to put the 7 on Morenz’s sweater back when the Stratford Streak first signed on to play with Bleu, Blanc, et Rouge. “Remembering that Morenz’ contract was dated July 7, 1923 (which was also my birthday),” the Montreal owner, manager, and sometime coach later wrote, “I assigned him sweater number seven the first day he reported to Canadiens.”

A whole constellation of early Canadiens stars had worn the number seven going back to the beginnings of the team in 1910, including Jack Laviolette, Jimmy Gardner, Louis Berlinguette, Joe Malone, Howard McNamara, and (the last before Morenz) Odie Cleghorn.

When Morenz departed Montreal for the Chicago Black Hawks in 1934, Dandurand declared that no other Canadien would wear the number again. As Dandurand told it in 1953, he meant forever, though at least one contemporary newspaper account from the fall of ’34 suggests that the understanding at the time was that it would go unworn as long as Morenz continued playing in the NHL. Either way, by various accounts, sweater number seven remained hanging in the Montreal dressing room for the duration of Morenz’s two-year odyssey to Chicago (where he wore number 3) and then New York (where he was 12).

He reclaimed it when he (and Cecil Hart) rejoined Montreal in the fall of 1936. When he was injured in January, it returned to its hook when he departed the Forum on his way to hospital.

In the wake of his death, Canadiens immediately declared that his number would be worn no more, making Montreal’s seven the third NHL number to be retired, after Ace Bailey’s Toronto six and Lionel Hitchman’s Boston three, both of which were so honoured in the same week (Bailey first) in February of 1934. 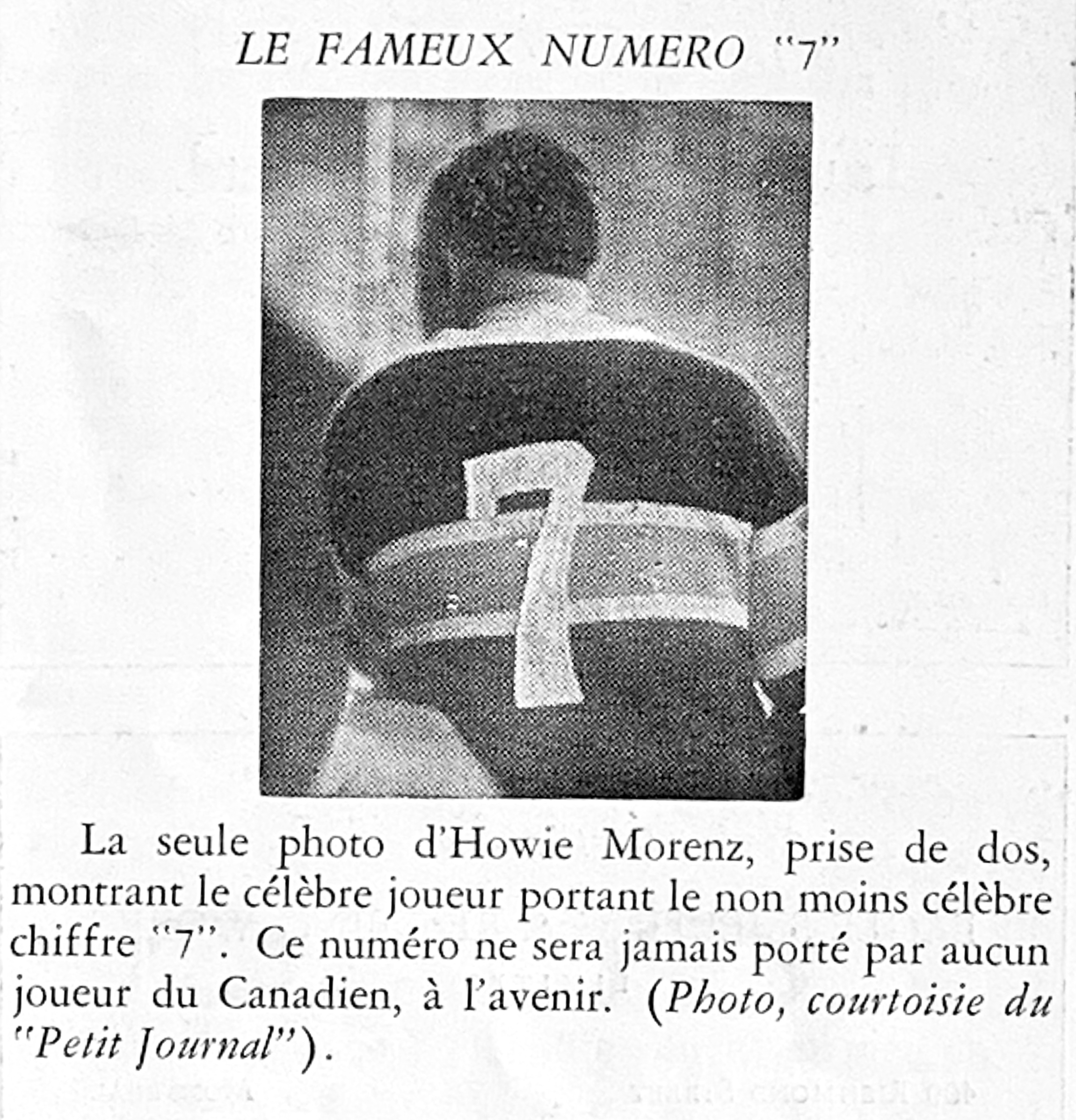 In November of 1937, Canadiens did amend their numerical position, slightly, making clear that when Howie Morenz Jr. ascended to play for the team, he would inherit his father’s number.

Howie Jr. had celebrated his tenth birthday that year. He did, it’s true, show promise as a centerman in later years, skating with the Montreal Junior Canadiens as well as the USHL Dallas Texans before a degenerative eye condition put an effective end to his chances of reaching the NHL.

November of ’37 saw the NHL stage the Howie Morenz Memorial Game at the Forum. A team of NHL All-Stars beat a team combing Maroons and Canadiens by a score of 6-5 in front of a crowd of 8,683 fans. Some $20,000 was raised on the night for the Morenz family. Former Canadiens owner (and goaltender) Joe Cattarinich paid $500 for the Morenz’ equipment and sweater, which he then handed over to Howie Jr.

The program for that Memorial evening included this photograph, included here, above,  purported to be the only one in existence to have caught Morenz from the back while he wore his celebrated seven. It’s a good image, even if it isn’t, in fact, so very exclusive — I’ve seen Morenz showing his back in other photographs going back to the ’20s. 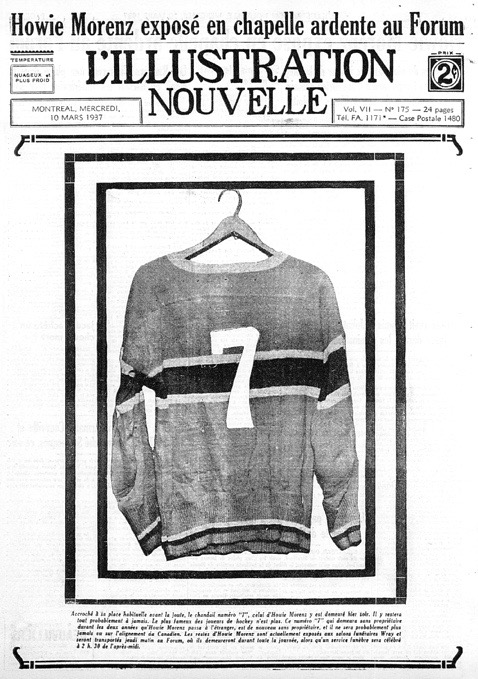 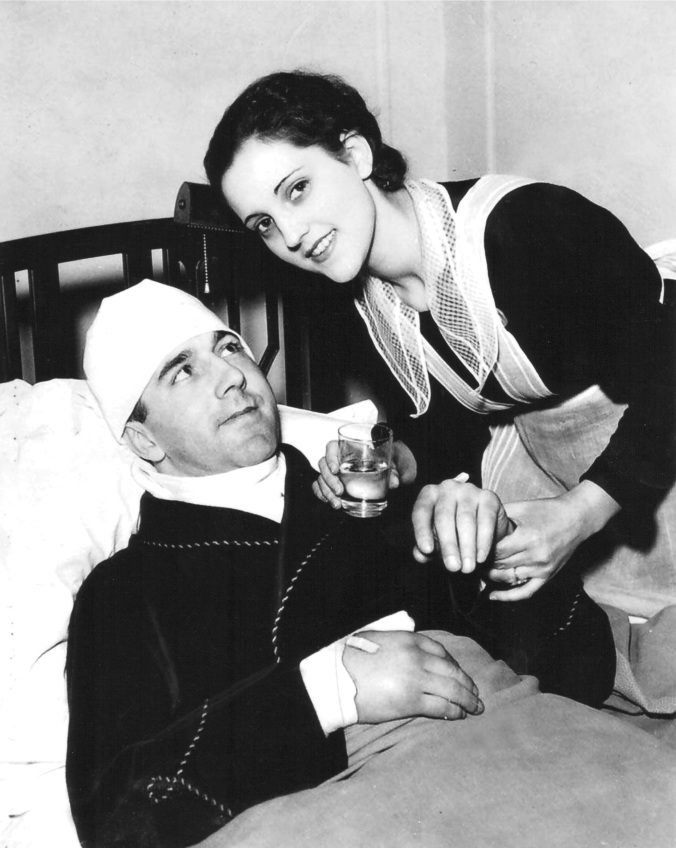 Bedridden: Chicago’s Mush March sent Howie Morenz crashing into the boards in March of 1934, sending Montreal’s star centre to hospital with a gash in his wrist and a broken thumb. Seen here the next day in a Chicago hospital alongside nurse Ruth Johnson, Morenz was said to be talking of retiring from hockey, though he soon denied that. “You can say,” he told reporters, that I am good for five — make it four, just to be sure — years more.”

An unhappy anniversary, Friday: 82 years ago, on March 8, 1937, Montreal Canadiens’ legendary centre Howie Morenz died of a coronary embolism at Montreal’s Hôpital Saint-Luc. He was 34. In the pages of my 2014 book Puckstruck, I wrote about the hurts and hazards Morenz endured during his 15-year NHL career, on the ice and off it. An updated and expanded version of that would look like this:

I don’t think goalposts hated Howie Morenz — there’s no good proof of that. From time to time they did injure him, but you could reasonably argue that in those cases he was as much to blame as they were. Did they go out of their way to attack him? I don’t believe it. What, possibly, could the goalposts have had against poor old Howie?

Morenz was speedy and didn’t back down and, well, he was Morenz, so other teams paid him a lot of what still gets called attention, the hockey version of which differs from the regular real-life stuff in that it can often be elbow-shaped and/or crafted out of second-growth ash, graphite, or titanium. But whether your name is Morenz or something plainer with hardly any adjectives attached to it at all, doesn’t matter, the story’s the same: the game is out to get you.

In 1924, his first season as a professional with Canadiens, Montreal battled Ottawa for the NHL title, which they won, though in the doing Morenz developed what the Ottawa Citizen diagnosed as a certain stiffness resulting from water on the knee.

That drained away, or evaporated, or maybe it didn’t — in any case, Morenz played on as Montreal advanced to vie for the Stanley Cup against Western challengers from Vancouver and Calgary. In a March game against the Vancouver Maroons, he was badly bruised about the hip, I’m not entirely sure how, perhaps in a third-period encounter with Frank Boucher that the Vancouver Sun rated a minor melee?

Canadiens beat the Calgary Tigers in Ottawa to win the Cup, but not before Morenz went down again. He made it back to Montreal before checking into the Royal Victoria Hospital. Montreal’s Gazette had the provisional report from there. The ligaments in Morenz’s left shoulder were certainly torn and once the x-rays came back they’d know whether there was any fracture. What happened? The paper’s account cited a sobering incident without really going into detail:

His injury was the result of an unwarranted attack by Herb Gardiner in the second period of the game, following a previous heavy check by Cully Wilson.

(Wilson was and would continue to be a notorious hockey bad man, in the parlance of the time; within three seasons, Gardiner would sign on with Canadiens.)

Subsequent bulletins reported no fractures, though his collarbone had relocated, briefly. Morenz would be fine, the Royal Victoria announced, though he’d need many weeks to recuperate. Those came and went, I guess. There’s mention of him playing baseball with his Canadiens teammates that summer, also of surgery of the nose and throat, though I don’t know what that was about. By November was reported ready to go, signing his contract for the new season and letting Montreal manager Leo Dandurand that he was feeling fine.

In 1926, January, a rumour condensed in the chill air of Montreal’s Forum and took shape and then flow, and wafted out into the winter of the city, along Ste. Catherine and on through the night, and by the following morning, a Sunday, it had frozen and thawed and split into smaller rumours, one of which divulged that Howie Morenz has broken his neck, another blacker one still, Howie Morenz is dead.

The truth was that in a raucous game against the Maroons he ran into Reg Noble. With two minutes left in the game he carried the puck into enemy ice, passed by Punch Broadbent, was preparing to shoot when … “Noble stopped him with a body check.”

Not a malicious attack, said the Gazette. Still,

Morenz went spinning over the ice. He gathered himself together until he was in a kneeling position after which he collapsed and went down, having to be carried from the ice. 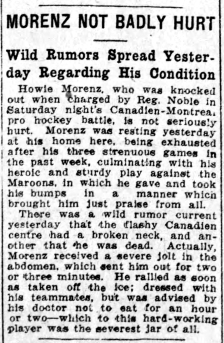 In the game’s final minutes, with Noble serving out punishment on the penalty bench, Maroons’ centre Charlie Dinsmore’s efforts to rag the puck, kill off the clock, so irritated some Canadiens’ fans that they couldn’t keep from hurling to the ice their bottles, their papers, many of their coins — and one gold watch, too, such was their displeasure, and their inability to contain it. Police arrested five men who maybe didn’t expect to be arrested, though then again, maybe it was all worth it, for them.

Dinsmore kept the watch for a souvenir.

In February, when the Maroons and Canadiens met again, this time at the Mount Royal Arena, Maroons prevailed once more. It was the third period when, as the Gazette recounted it,

Morenz had got clear down the left aisle. He tore in at terrific speed on Benedict but before he could get rid of his shot, Siebert and Noble tore in from opposite directions. Siebert bodied Morenz heavily. The Canadien flash came up with a bang against the Montreal goal post and remained on the ice doubled up. He had taken a heavy impact and had to be carried off the ice.

The diagnosis: not only was Morenz (and I quote) severely jarred, a tendon at the back of his ankle proved badly wrenched.