Plow Share: “A steady snowfall and frequent pauses made today’s game an almost intolerably slow spectacle,” Albion Ross of the New York Times carped in February of 1936 after the U.S. opened its Winter Olympic account against hosts Germany on the outdoor ice of Garmisch-Partenkirchen’s stadium. The pauses were for the snow-plowers, above, who did yeoman’s work in the blizzard that ensued. The Americans managed a 1-0 win, though there was grumbling from the home team, with Herman Kleeberg, head of the German hockey federation,  claiming that the game had ended “irregularly” because, while tournament officials had proposed to suspend play due to the snowfall, U.S. coach Walter Brown had refused because the U.S. was winning. The Germans later clarified that while they had thought that the game should be halted, they respected the referee’s decision to continue, and that the matter was closed as far as they were concerned. Coach Brown said that he’d given up midway through the game trying to assess his own players. “Conditions were so terrible,” he said, “I don’t know anything more about the team than I knew before.” 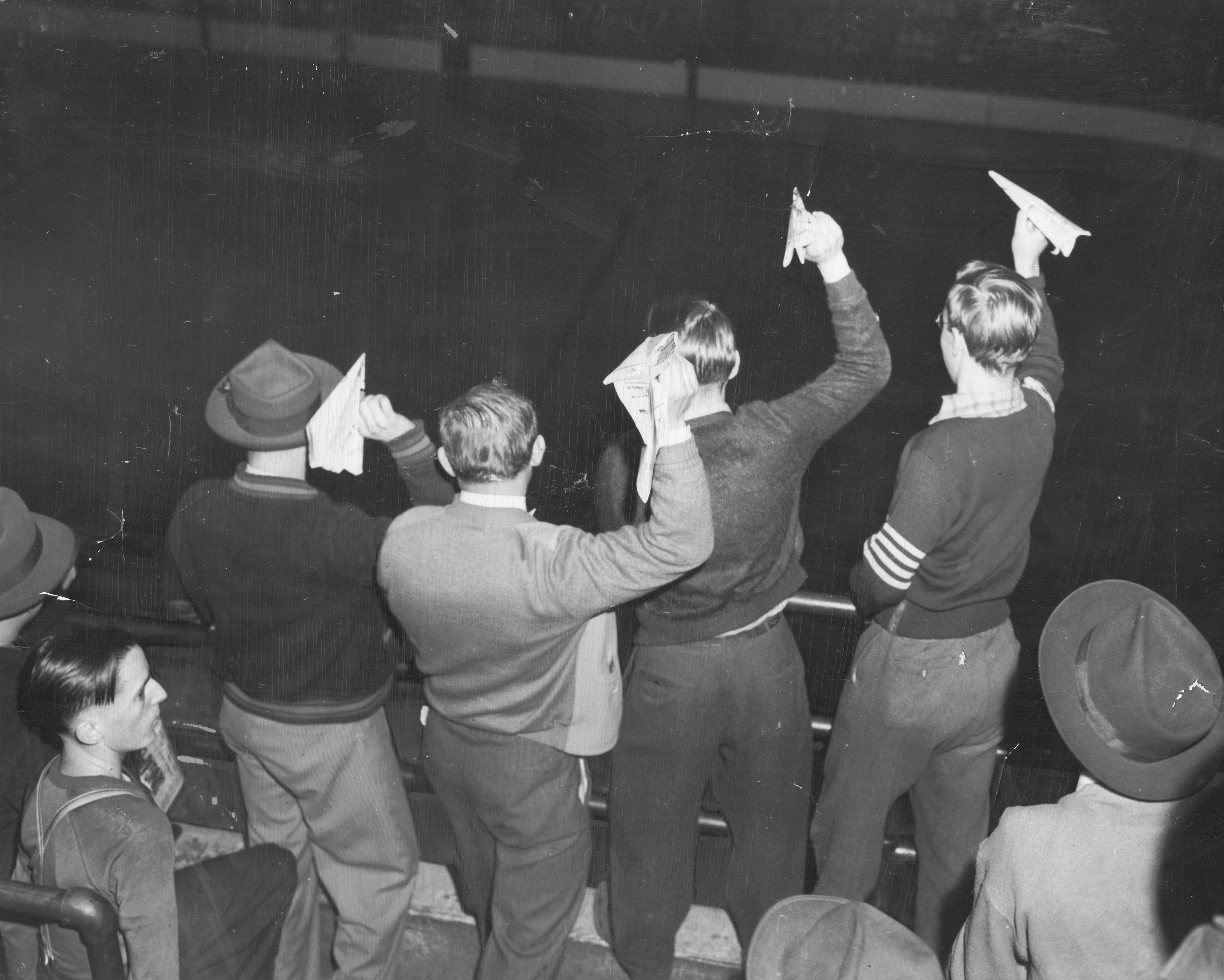 Flyboys: Pilots of the upper gallery at Chicago Stadium prepare to launch their planes at the ice in February of 1942.

Earl Davis announced his findings in January of 1944.

“Hockey fans are the craziest people, of that I am sure,” was what years of experience had taught him. “They do not seem to know it is dangerous to throw things — that a player could break his leg on the junk they toss — and that we are breaking our backs picking it up. One night we scooped up 300 or 400 pennies, several dimes and nickels, and a couple of quarters.”

Programs, tissue paper, poker chips, marbles, decks of cards, rice, navy beans were all on Davis’ list of items he and his team had retrieved through the past few wartime seasons. “Eggs — a dime a dozen. Oranges, apples, grapefruit, slices of bread — some day we’ll get the knives and forks. If it wasn’t for rationing …”

Chamberlain also inquired into the flying machines that filled the Stadium airspace night after night. “Made with painstaking care from programs by guys in the far, smoke-bound reaches of the upper gallery,” dozens of paper airplanes regularly went winging down from on high in these “stadium sweepstakes.”

Blackhawks president Bill Tobin described how it worked: “They choose a blueline or a circle on the ice and try to see who can sail their planes closest to the marks. They bet anything from five cents to five dollars on the accuracy of the flights.”

Tobin had his choice cut when it came to stories of flying food.

“The Hawks were in Boston when what should splash down on the ice but a big chunk of beef steak, uncooked. Taffy Abel, who was playing defence for us then, picked it up, made a bow towards the gallery, and carted it off. He said he fried and ate it after the game.” 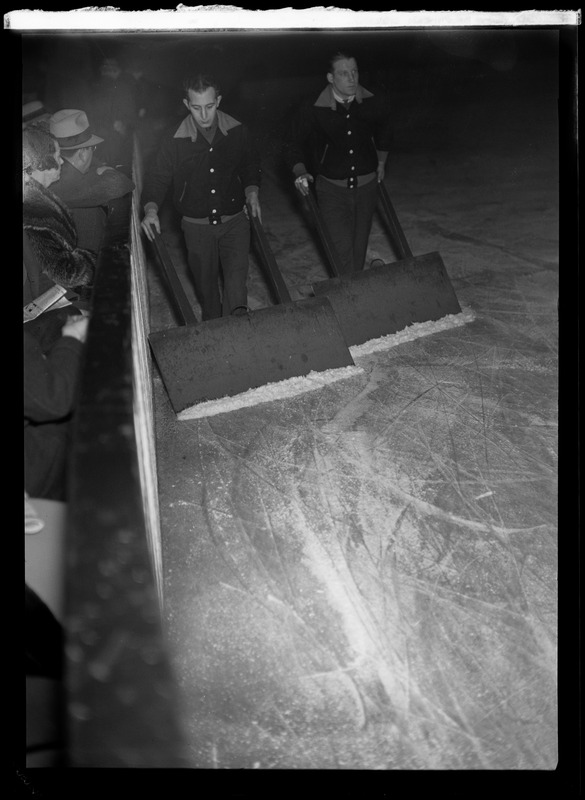 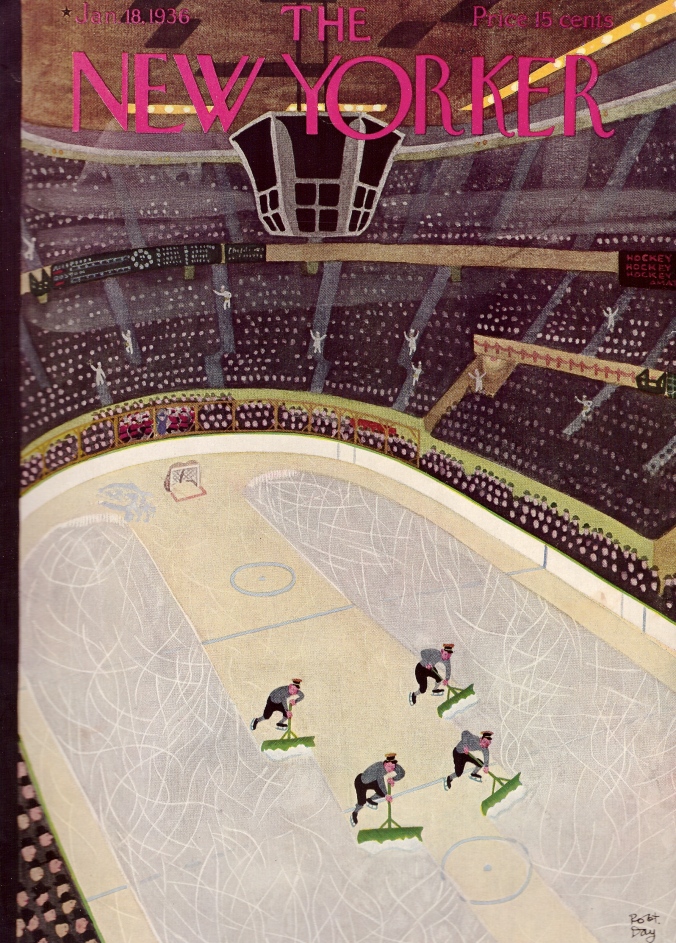 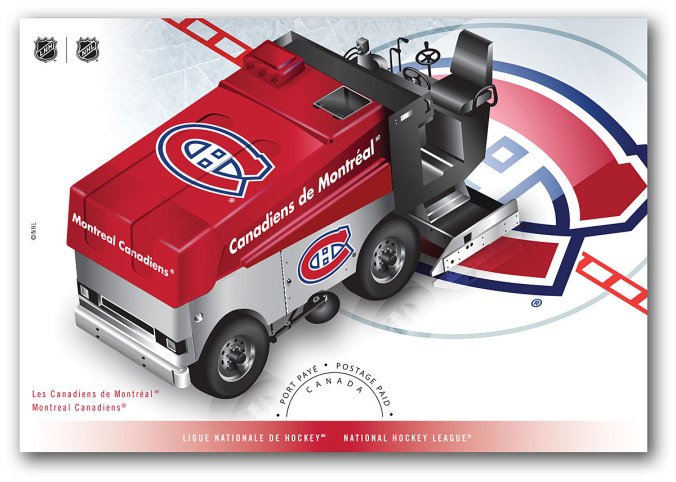 The hockey highlights were, if you’re wondering, few and far between: when the Montreal Canadiens hosted the Toronto Maple Leafs on a Thursday of this very date in 1955, the two old rivals ended up in what the Gazette’s Dink Carroll was only too irked to declare “that bane of hockey, the scoreless tie.”

The Leafs, to their credit, laid down a stifling defensive blanket over the powerful first-place Canadiens, gaining a point in the process and helping their own third-place cause. Toronto also, incidentally, set a new league record: their 22 ties were the most any team had accumulated in an NHL season. Not that any of this impressed the 14,332 fans on hand in Montreal on the night: their verdict was recorded in the volume of peanuts, programs, and newspapers flung on the ice at the end of the game. “One disgusted spectator tossed in a couple of pig’s feet,” Carroll noted.

Which brings us, however loopingly, to the point: no, not the fact that in another week’s time, the Forum would be filled with the ire, tear gas, and Clarence Campbell-antipathy that fed and fired up March 17’s Richard Riot.

That was a whole other Thursday. This one, March 10, we mark for the altogether less-ruinous reason that it saw the Canadian NHL debut of everybody’s favourite ice-resurfacer, the Zamboni.

It was in California that rink-owner Frank Zamboni spent most of the 1940s getting a prototype invented and built on the chassis of a U.S. Army jeep before he was ready to launch in 1949. The first one to arrive in Canada went to Quebec’s Laval College in 1954, and that same fall Boston Garden became the first NHL rink to put one into service. The Monster, the staff called that one. The Boston Globe reported that “Helo Grasso, the pilot, is being urged to wear a crash helmet.”

A little ice-upkeep history seems in order here, duly dedicated (why not) to David Ayres. In the first few decades of the NHL, the ice was most often scraped and swept rather flooded during games. From the time the Forum opened in 1924, maintenance staff deployed their own distinctive 15-foot birch brooms, as highlighted here by NHL.com columnist Dave Stubbs: 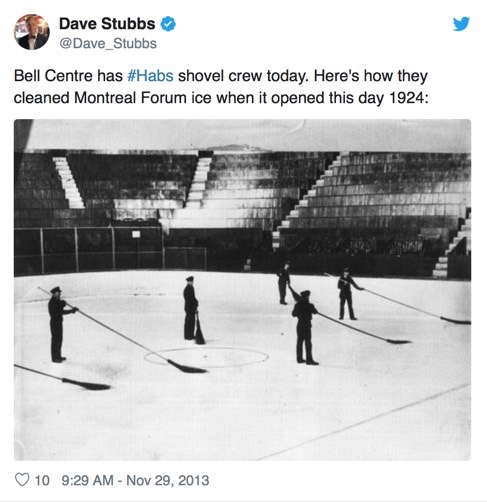 These were still in use, apparently, in the late 1930s, bemusing visiting reporters like the Brooklyn Daily Eagle’s George Currie:

Even the ice-scrapers are different up here. They sweep the snow off the ice with long, broomlike bunches of tree branches. Between the periods, the ice has more snow sweepers on it than hockey players during the actual play.

An important if undercelebrated moment in ice-cleaning history came in 1940, in September, when the NHL’s Board of Governors gathered in New York ahead of the new season. Among other new rules and procedures decreed there was one that insisted (as CP reported) “that the ice surface be sprayed between periods, instead of scraped or brushed, except when two teams have a mutual understanding that spraying is not necessary.”

Tommy Gorman was running the Canadiens that year, and when the games got going in November, the Gazette took note of the “new ice-making machines” he’d enlisted for duty between periods: “They’re sort of hot-water wagons dragging sacks behind, and they do a great job on the ice.”

More or less the same apparatus, that is, that was in operation at Toronto Maple Leafs Gardens well into the ’60s: 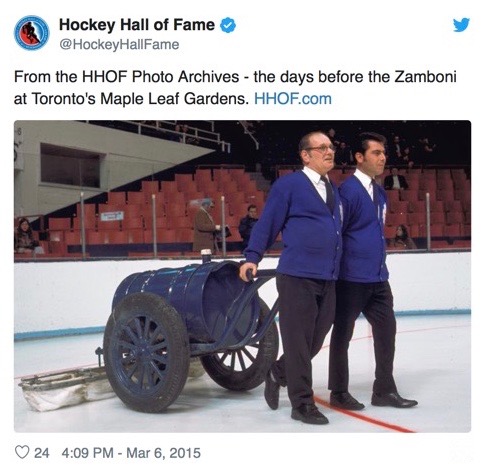 The Zamboni that made its debut 65 years ago tonight was a Model E, the 29th to roll off the company’s production line following the introduction of the one-and-only Model A in ’49.

“This gadget does everything but talk on an ice surface,” the inventor himself was saying a few days before that Montreal launch.

The man at the wheel of the $10,000-machine — about $97,000 in today’s money — was Forum superintendent Jim Hunter. In the days of the old brooms, he said, cleaning the ice was a job for eight to ten men. Now, he could do the work in six or seven minutes, he said. “The real beauty of the machine is that it takes only one man to operate. It also gives the ice a much smoother finish than a crew of men working with the present hot-water barrels.” 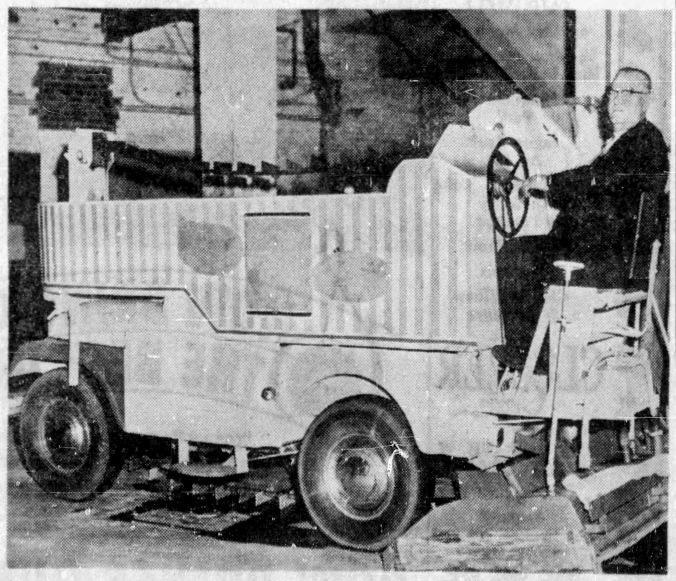 Wheelman: Jim Hunter at the wheel of the original Forum Zamboni in 1961. 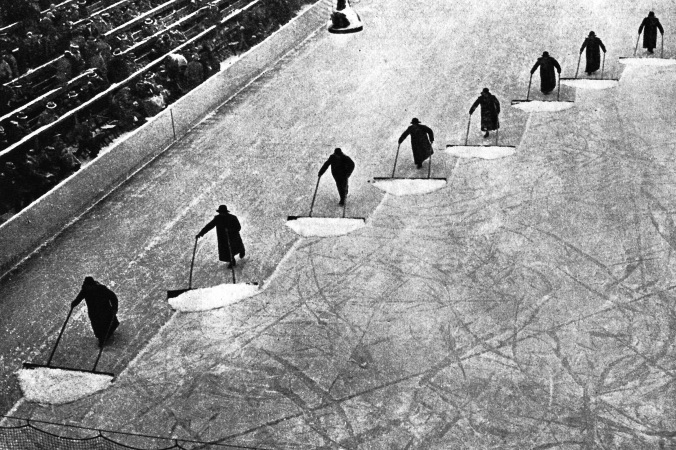 Frank Zamboni didn’t get around to inventing his eponymous ice resurfacer until 1949. What that meant for the 1936 Winter Olympics was that, knowing the rink at Garmisch-Partenkirchen’s Eis-Stadion wasn’t going to scrape itself, Bavarian men in Bavarian hats were going to have to get the job done. And so, did. 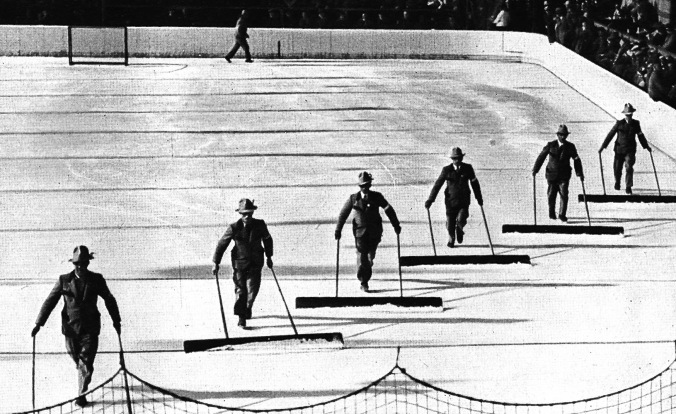 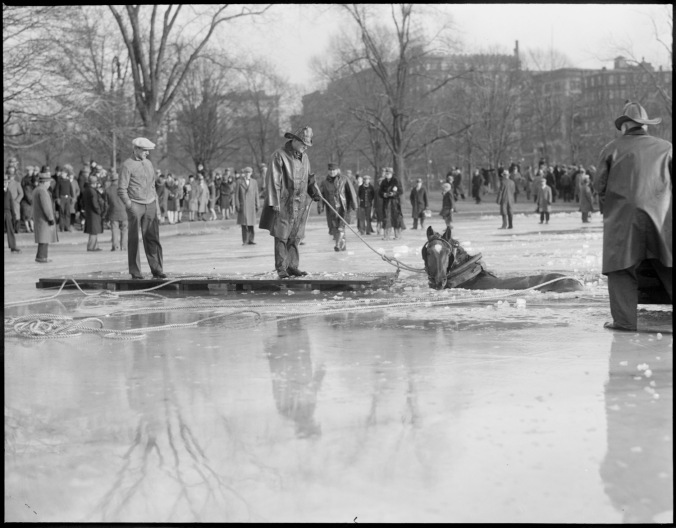 He was doing his job, that’s all. A Tuesday in January of 1929, and Bob, as usual, was hauling the scraper across the ice at Boston’s Public Garden, getting it ready for skaters under the supervision of his driver, James Ward. “The big good-natured bay,” is how the Daily Globe recognized him, Bob, “favourite with all the children.” But on this day, as he neared the shore on the rink’s Arlington Street side, he went through. James Ward couldn’t help him, but as luck had it, Patrolman Arthur Blood from the Back Bay Police Station happened by and soon had the call out for reinforcements.

I’m not going to leave you hanging: Bob got out fine. Patrolmen Noyes, Regan, Gervan, and Maguire all lent a hand, roping up Bob’s legs and hauling him free. Although, from the photograph, some firemen were in on it, too. Nothing to worry about, in any case, according to The Globe:

After Bob was steady on his feet, officer Blood took him to the Animal Rescue League on Carver St., where he was given first-aid treatment. He was found to have suffered no serious injury. 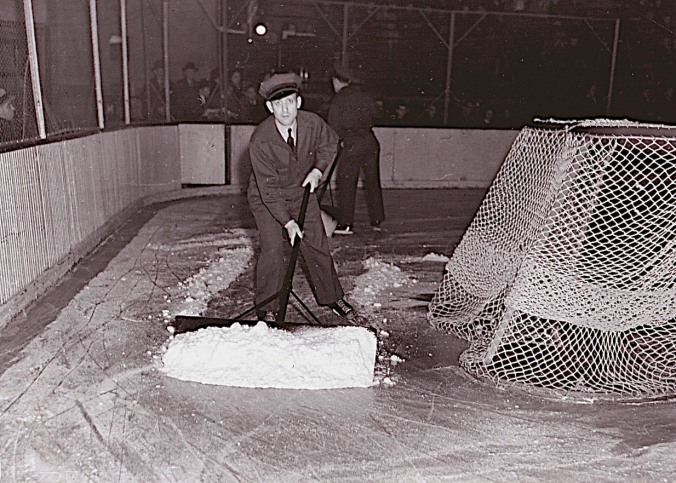 Snow Job: The men who skate and scrape, at Chicago’s Stadium, circa 1941. A year later, in California, Frank Zamboni began to fiddle with tractors and sleds in his quest for a better way of resurfacing skating ice. It was 1949 before he got it right and 1954 by the time the first Zamboni flooded NHL ice, in Boston’s Garden. 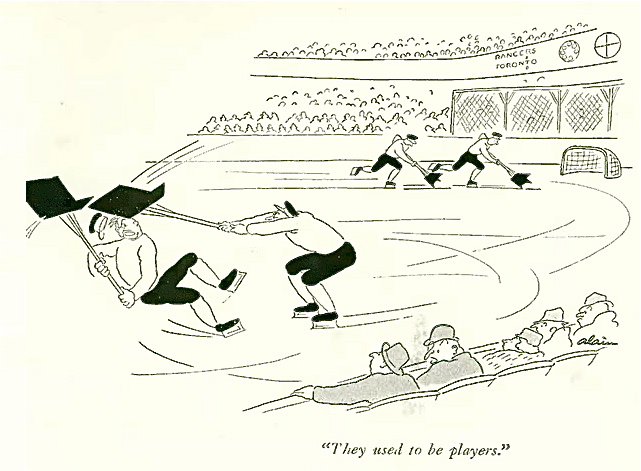