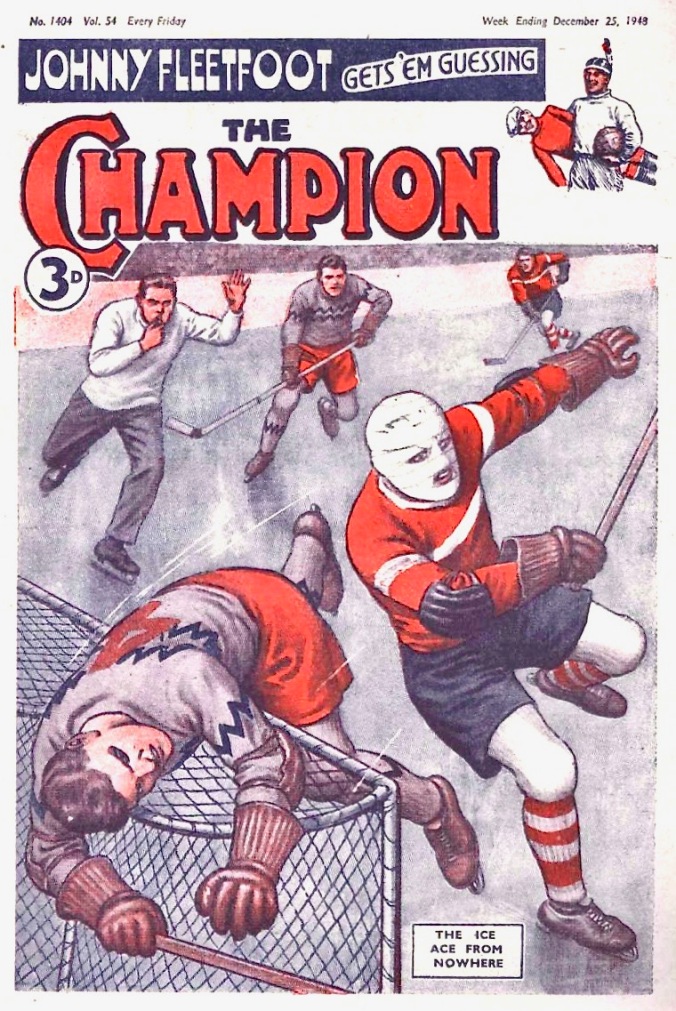 If nothing else, “The Ice Ace From Nowhere” answers a question that no-one ever asked: where can I get me some concussion-themed fiction with a hockey slant?

I’m just really getting going, but here’s some of what I know of John Marshall’s serial tale of high crimes and head trauma: it was published in instalments through the fall of 1948 and into ’49 in a boisterous, boy’s-own English weekly called “The Champion” that somehow came to add hockey to its regular roster of adventures involving Indigenous footballers (Johnny Fleetfoot, Redskin Winger) and RAF pilots who used to be championship boxers (Rockfist Rogan).

I don’t know who Marshall was, or what else he wrote, but I can tell you that, so far, he’s gone all in on his post-concussion-syndrome storyline. Chapter one: man wakes up lying on the ice “of a frozen river in Canada.” Knowing not a thing about it (or anything), he asks himself the old Talking Heads puzzler: “How did I get here?” No clue. There’s a stick nearby and a puck; he’s wearing skates. “Guess I must have taken a big bump,” he tells himself, just like a hockey player. “I seem to have scrambled my brains a little. It’ll all come back to me in a minute.”

Still, he figures out how to get himself going on skates. Attaboy. Within a couple of paragraphs he’s discovered a bag full of money. In a tree. Also? A helpful newspaper clipping suggesting that he may have killed a man while robbing a bank in Chicago before … skating north? The police must be after him, he decides; best to keep on skating? Before he can ponder much on that, he finds himself recruited to try out for a hockey team, the Gladiators, that just happens to be practicing around a bend of the river because, you know, Canada.

Our hero (villain?) doesn’t remember his name, so he can’t tell it to the Gladiators, who think he’s just shy, and dub him “Silent.” Uh-oh: as the scrimmaging starts, he realizes … he … he … doesn’t know the rules. So that might be a problem, especially if the Gladiators have a concussion spotter on staff. I’ll have to let you know how it goes: that’s as far as I’ve got in this particular brain-injury barn-burner.