With the Hockey Hall of Fame set to announce its 2109 class today, the hour is now for all those with an impassioned plea or petition for a player who might have been, to date, overlooked or grievously slighted. Who have you got? Jennifer Botterill or maybe Kim St. Pierre? Sven Tumba, Alexander Maltsev? You could make a reasonable argument for Herb Cain or Lorne Chabot, even if the Hall probably won’t any time soon. What about Kevin Lowe? Theo Fleury? Paul Henderson’s name comes up annually; this year, on the January day he turned 76, he even got a birthday boost from Canada’s House of Commons when MPs unanimously resolved to “encourage” the Hall to induct him ASAP “in recognition of his incredible contribution to Canadian hockey and its history.”

One cold night last November a distinguished panel of hockey pundits played the Hockey Hall parlour game at a rink of renown in midtown Toronto. In front of a small audience not far from the ice of St. Michael’s College School’s Arena the panel parleying who should be in the Hall of hockey’s Fame but isn’t featured historian Todd Denault; Ken Campbell, senior writer for The Hockey News; Steve Dryden, senior managing hockey editor for TSN and TSN.ca; and Toronto Sun columnist Steve Simmons.

While there was some due given builders who deserve the Hall’s attention — Cecil Hart, Claude Ruel, and Bill Tobin got mentions — most of the talk was of players. Male players — arguments for outstanding women candidates like Maria Rooth or Kim Martin weren’t on the table.

There was plenty of discussion of just how measure greatness and of what constitutes a Hall-of-Fame career. It’s particularly difficult, the panelists agreed, to evaluate players from the distant past — “guys,” as Steve Dryden put it, “you haven’t seen.” Does Sid Smith deserve a place, with his three Stanley Cups with the Toronto Maple Leafs in the 1940s and ’50s, two Lady Byngs, and a First Team All-Star selection? What about Herb Cain of the wartime Boston Bruins, the only player in history to have led the NHL in scoring not to have been elevated to the Hall?

Statistics tell a certain tale but not a complete one: how, for instance, do you properly appraise the career contributions of defensive defenceman (cf. the unrecognized likes of Lionel Hitchman, Bob Goldham, and Kevin Lowe) or of forwards who made a name as tenacious checkers and penalty-killers (hello, Claude Provost and Guy Carbonneau).

And what about Henderson? When his name came up, as it always does, the hero of the Luzhniki got both a hard nay and a robust yay. He was, Steve Simmons said, no more than a very good NHLer who had a great week in Moscow in September of 1972. Maybe so, but to historian Paul Patskou’s way of thinking, the cultural significance and legacy of his Summit Series performance is more than enough to earn him a place.

As the evening went on and the panelists made their presentations favouring particular players whom the Hall has (so far) failed to call up, the names of the missing kept coming: Lorne Chabot, Bernie Nicholls, Theo Fleury. Steve Dryden argued Keith Tkachuk’s cause while Simmons flew the flag for Rick Middleton.

Todd Denault made a compelling case for J.C. Tremblay, Montreal’s stellar defenceman who was a First Team All-Star in 1971 and helped Canadiens win five Stanley Cups. Asked once by Denault for the name of the one player he thought deserved a place in the Hall, Jean Béliveau didn’t hesitate to name Tremblay. Béliveau did, of course, serve on the Hall’s Selection Committee from 1981 to 1995, so it may well be that he did his best to make it happen. Tremblay jumped to the Quebec Nordiques of the WHA in 1972, and was one of the players dropped from the original roster of the Canada’s Summit Series team for that reason. At the confab at St. Mike’s, there was speculation that maybe the politics of a lingering bias against the WHA may have affected Tremblay’s chances for getting the Hall’s call.

But maybe not. What we do know is that deliberations by members of the Selection Committee are more or less opaque, and for all the clamouring we do here beyond the confines of their consultations, clamour is mostly what it amounts to. Still, once you’re committed to reading the runes, it’s hard to stop. Along with your Cains and Chabots and Provosts, the recognition that J.C. Tremblay fails to get may just be a matter of time: it’s 40 years now since he retired.

Starting in 1998, the Hockey Hall of Fame did have a category for Veteran Players that saw the likes of Buddy O’Connor, Fern Flaman, Clint Smith, Lionel Conacher, and Woody Dumart plucked from the far past. But since that was curtailed in 2000, the Hall’s view of the past has dimmed. Willie O’Ree’s induction last year came 57 years after he played in the NHL, but he’s something of a special case, and thereby an outlier. Beyond him, only twice in the past 19 years have players who’ve been retired more than 30 years been inducted. In 2006, Dick Duff was recognized 34 years after he’d stowed his skates, and the gap was the same in 2016 when Rogie Vachon finally got the call. 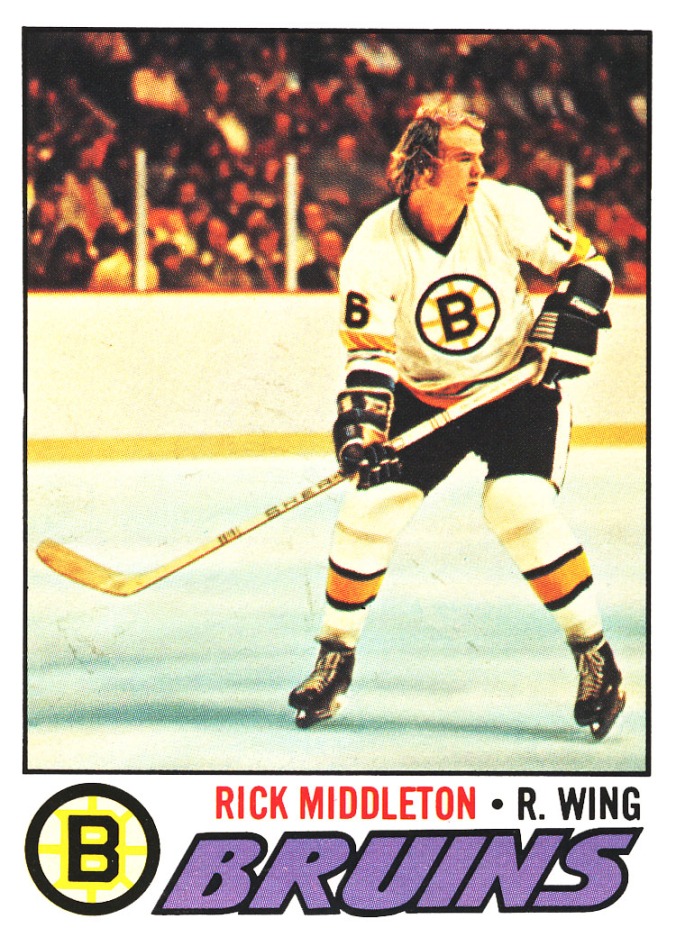 Hallworthy? Seen here in 1977-79, Rick Middleton is often mentioned by those of us who aren’t on the Selection Committee, which probably means he won’t be called.