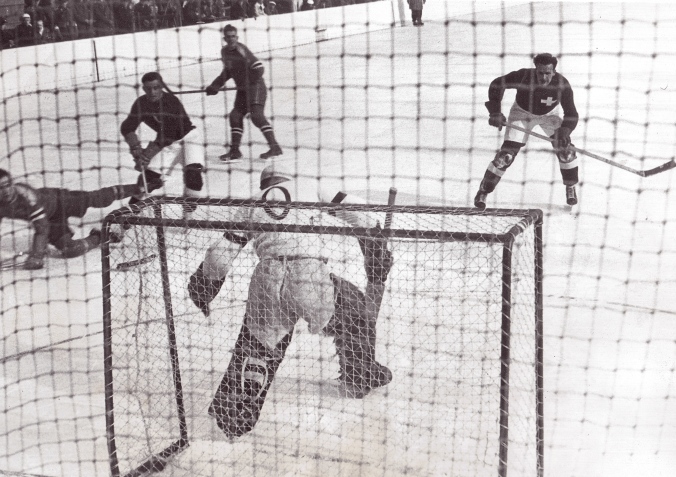 Swiss Misses: A U.S. foray at Switzerland’s goal ends with a save at the Winter Olympics in Garmisch-Partenkirchen, Germany in February of 1936. The Americans won this early-round game, 3-0, and when it was all over their medals were bronze.

One of the hockey players whose name each of Russia’s 143 million people know is Alex Ovechkin, according to Slava Malamud, a writer for Sport Express. There are one or two others, he said, naming no names.

There were questions this week about whether the leg Steven Stamkos broke in November is going to keep him from Canada’s team at the Olympics. He’s healed up enough to be practicing with Tampa Bay, and staying positive, but as TSN.ca reported, he hasn’t got the go-ahead quite yet:

“You just have to listen to your body,” Stamkos said. “We’re talking a lot about the Olympics and my goal is to try to be ready for those Games, but your body doesn’t lie. If you’re doing certain movements and you feel pain then that’s an indicator that maybe it’s not quite ready.”

Meanwhile, Dmitry Chesnokov from Puck Daddy at Yahoo! Sports talked to Detroit coach Mike Babcock about Pavel Datsyuk, whose body injury has been described in recent days as both “lower” and “undisclosed.” Will Datsyuk play this week?

“I got no idea,” Babcock said. “I just watched him in practice, his one leg isn’t holding up. Obviously, Pavel wants to play for his country, and he wants to be a part of things, but you got to be healthy.”

Is he going to be okay for Sochi, where he’s supposed to be captaining the Russians?

Babcock paused. “I am not the doctor,” he said. “I don’t have a clue.” END_OF_DOCUMENT_TOKEN_TO_BE_REPLACED