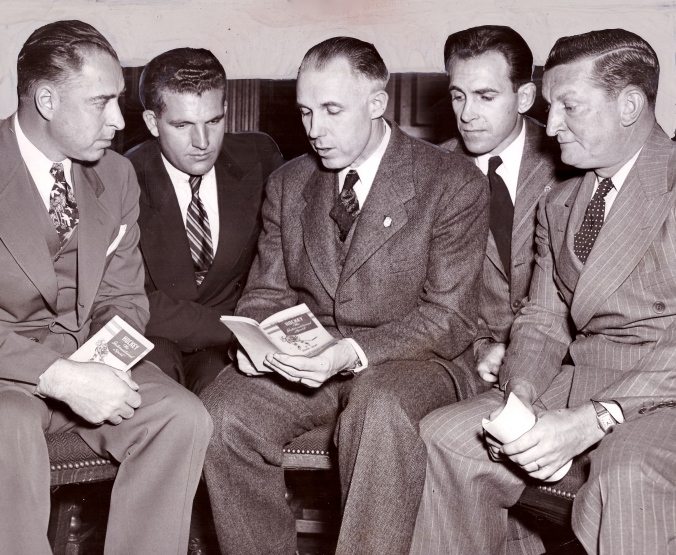 Clarence Campbell was an old referee in 1946, as in erstwhile — it had been almost ten years since he’d worn the whistle in the NHL. He had a new job now: that September, the league’s board of governors elected him president during their semi-annual meeting at Montreal’s Windsor Hotel. It was an office he’d keep for 31 years. That first day, in a statement, Campbell had nice things to say about his predecessor, Red Dutton, and also this: “I have unbounded confidence in the future of hockey, not only in Canada and the United States, but throughout the whole world. As Canada’s national sport I believe it has made tremendous strides in the past 30 years and in my opinion there is no limit to its expansion not only on this continent but in Europe.”

A month later, Campbell was in Detroit for the start of the new season. That’s where he met, above, with a bevy of officials to read to them from the rulebook. From the left, that’s linesman Doug Young; referee Bill Chadwick; Campbell; linesmen Norval Fitzgerald; and Stan McCabe.

Campbell told reporters on that same visit that his directive to referees going into the season was to hold their noise. “There will be a full 60 minutes of action,” he said. “I’ve instructed all officials to keep the game moving and to lay off the whistle unless it’s absolutely necessary.” The Leafs and Red Wings didn’t make it easy for Chadwick, who ended up calling 12 penalties in a game that ended in a 3-3 tie. For the Leafs, the miscreants included Bill Ezinicki and Gus Mortson. For the Wings, Adam Brown somehow picked up the game’s lone fighting major, while a rookie making his NHL debut took two minors. Gordon Howe was his name, 18 years old. He scored his first goal, too.