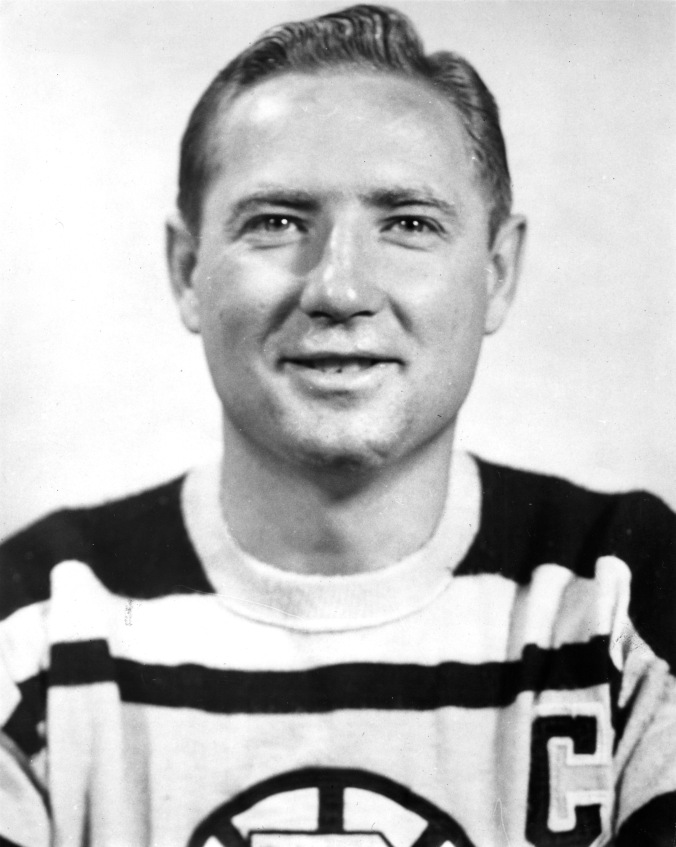 The night the Bruins fêted Fern Flaman at the Boston Garden in 1960, they gave him a hockey-rink cake and a colour TV set, also a freezer, a necktie, a big portrait of himself, some silverware, bicycles for the Flaman kids — and, oh, a six-month supply of meat and ice cream, according a contemporary account of the Boston Globe’s, which, it pains me to report, could easily have but did not itemize what meats and what ice creams, exactly, were involved. This was all before the Bruins faced their old rivals the Montreal Canadiens, and beat them, too, 6-5, though I should say that Flaman’s big present that night, they wheeled it right out on the ice, was a brand-new Rambler station wagon that, when Flaman skated  over and peered within, guess what, his mother, Mary, was sitting there, surprise, just in from her home in Regina.

The Globe reported that it was the first time in Flaman’s career that he’d “cried on the ice.”

And Mrs. F? “What made this night wonderful,” she told the Globe, “was having others think Ferny is wonderful. I’m a very happy mama.”

Flaman was 34 that, playing in his 17th and final NHL season. The Dysart, Saskatchewan, native, who died at the age of 85 on a Saturday of this date in 2012, was just 18 when he made his start with the Bruins in the winter of 1945, making his debut, a winger, then, in a game against the New York Rangers. “A fast and rugged youngster,” was how the Globe introduced him, “put on the third line to add a body-checking element.”

“He played his part with zest,” Harold Kaese wrote, “so much zest that late in the game he even challenged Bucko McDonald. This, as Flaman learned, was much like challenging a cement-mixer. He was shaken up, but should be ready by Sunday.”

In 1950, the Bruins traded Flaman to the Maple Leafs in a deal that also sent Leo Boivin, Ken Smith, and Phil Maloney north in exchange for Bill Ezinicki and Vic Lynn. He arrived in Toronto in time to win a Stanley Cup in 1951, when Bill Barilko, his partner on the blueline, scored that famous overtime winner of his.

Three times during the ’50s he was named to the NHL’s Second All-Star Team. Montreal’s Doug Harvey owned the Norris Trophy in those years, taking home seven of eight between 1955 and 1962, but Flaman finished third in Norris voting in both ’56-57 (behind Red Kelly) and ’57-58 (trailing Bill Gadsby).

In a poll of NHL coaches in 1958 that ordained Gordie Howe the league’s “smartest player” and Maurice Richard “best man on a breakaway,” Flaman was deemed “best fighter.”

“I played with him and I played against him,” another Bruins’ captain, Milt Schmidt, said at the time of Flaman’s death, “and there was no-one tougher in the National Hockey League.”

Flaman went back to Boston in 1954 in a trade for Dave Creighton. He played a further seven seasons for the Bruins, the last six as team captain, before he moved on to the AHL Providence Reds as playing coach in the fall of 1961. He later coached Northeastern University.

Fern Flaman was inducted into hockey’s Hall of Fame in 1990. 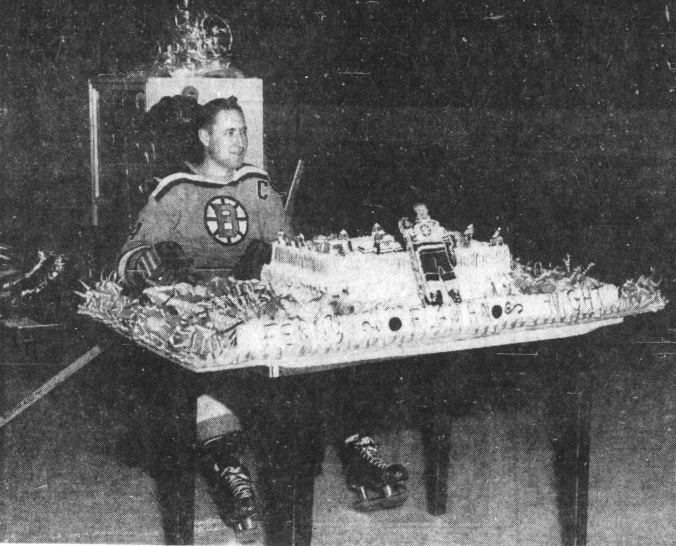 Sask Strong: In 1961, the Boston Garden celebrated Flaman’s Bruin faithful service with gifts of a station wagon, meat, and (above) a big hockey-rink-shaped cake. 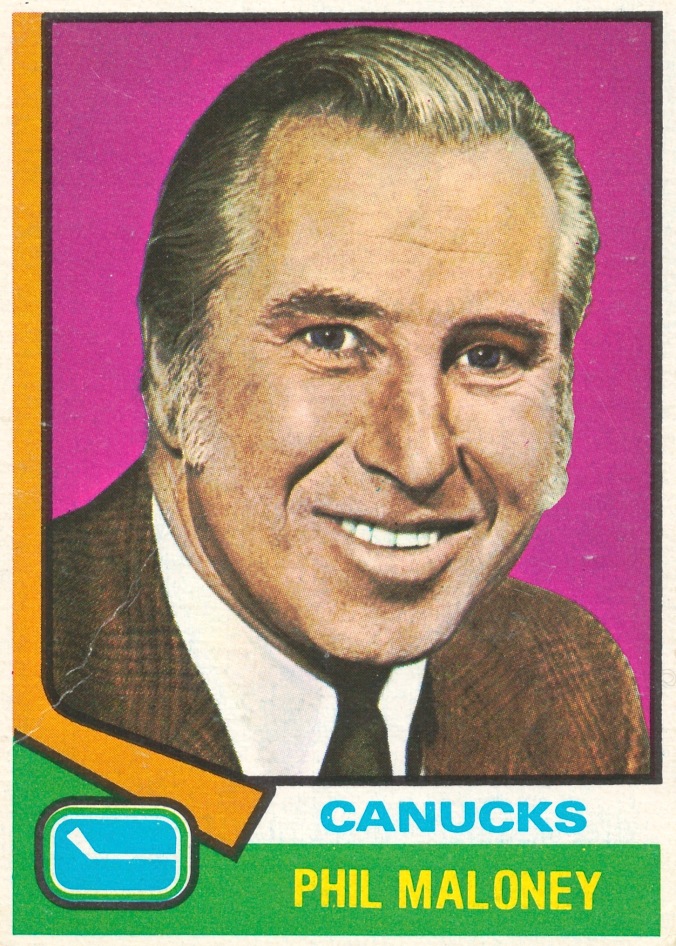 Coastal Coach: “He’s fiery type of man behind the bench,” the back of Phil Maloney’s 1974 hockey card confided, along with the news that he was “hopeful of vast improvement” for the Vancouver Canucks he was steering as both coach and GM. Born on a Thursday in Ottawa in 1927, Maloney died yesterday at the age of 92. He was a centreman when he played, skating in the NHL for Boston, Toronto, and Chicago, before finishing his career in Vancouver with the WHL Canucks. He started with the NHL Canucks as a scout in 1970, and served as an assistant coach, too, before the taking charge of the team in ’73. His best year behind the bench was 1974-75, when he steered the Canucks to the top of the Smythe Division and the team’s first appearance in the playoffs, where they duly fell to the Montreal Canadiens. In the winter of 1976, the GM in him fired the coach, replacing himself with Orland Kurtenbach mid-season. 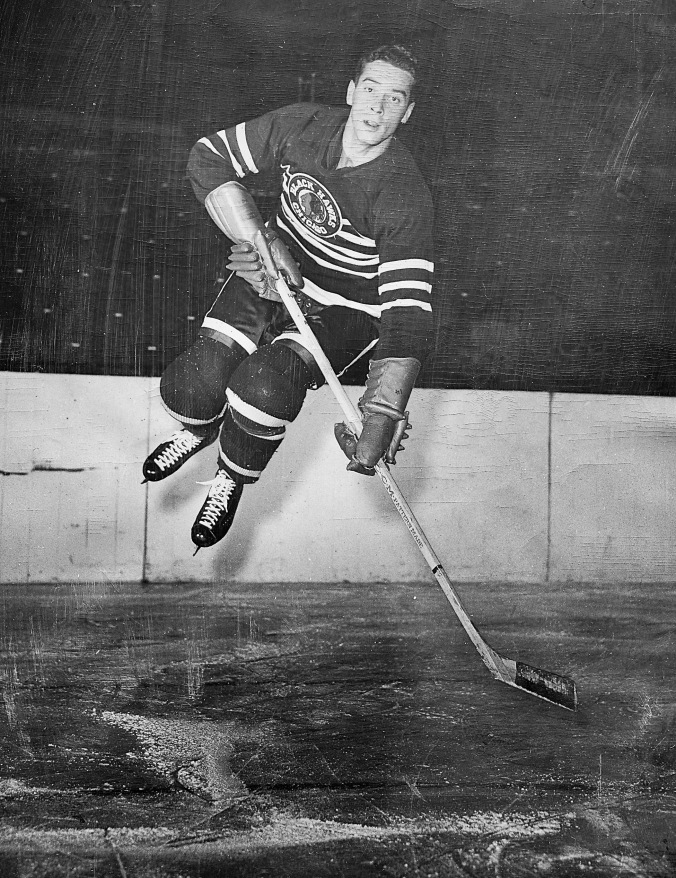 Upstart: Headed for the Calder Trophy, they said. One of the two best rookies in the NHL (that from Canadiens’ coach Dick Irvin; the other rookie he favoured was Boston’s Dave Creighton). Born on this day in 1926 in Sceptre, Saskatchewan, Bert Olmstead would eventually make a name as a dynamic left winger for the Montreal Canadiens and Toronto’s own Maple Leafs. But Olmstead, who died in 2015, made his leap into the NHL playing for the Chicago. And it was as a 23-year-old Black Hawk that he rated all those rookie raves during his first full NHL season, 1949-50. Pundits were mentioning him as the leading Calder candidate as early as December, that year; by February, the six NHL captains were prepared to nominate him as the league’s primo rookie. In April, Dink Carroll of the Gazette in Montreal was still hearing that Olmstead still had the inside track. It didn’t work out: in May, when 18 sportswriters cast their ballots, it was 25-year-old Boston goaltender Jack Gelineau who ended up top of the Calder rankings. The league gave him $1000 to go with the trophy, and the Bruins rewarded him, too, with (an undisclosed amount of) cash. Olmstead tied Bruins’ centreman Phil Maloney for second place in the Calder voting; others who were considered were Gus Kyle of the New York Rangers; Toronto’s John McCormack; and Steve Black of the Detroit Red Wings.