Sixty years ago today, Montreal was minus-nine and snowed under, cloudy overhead, with light flurries expected and a risk of freezing drizzle. Normal, then, for a Saturday in January. Marlon Brando’s new movie, Sayonara, was playing at Loew’s downtown. In Ottawa, Prime Minister John Diefenbaker was feeling better. Having spent the week confined to his bed with a strained back, he was up and out for a short walk. All was well in the local hockey cosmos: the Montreal Canadiens, Stanley Cup champions for two years running, were once again a top the NHL standings. Coming off a 5-2 Thursday-night win over the Toronto Maple Leafs, the Habs were preparing to host the Boston Bruins and their newly promoted winger, 22-year-old Fredericton, New Brunswick-born Willie O’Ree.

This week, the NHL is remembering that 1958 night, the first to see a black player play in the league. O’Ree, who’s 82 now, was honoured last night and roundly cheered at Boston’s TD Garden when the modern-day Canadiens played (and lost to) the Bruins. Earlier in the day, Boston Mayor Marty Walsh had proclaimed today Willie O’Ree Day across the city. That was at a press conference dedicating a new street hockey rink in O’Ree’s honour.

Called up in a manpower emergency, O’Ree played only a pair of games during his first NHL stay. It would be three more years before he returned to score his first goal.

Back in ’58, the Bruins and Canadiens were spending all weekend together. Following Saturday’s game, they’d meet again Sunday in Boston. The then-dominant Canadiens were, as mentioned, cruising atop the six-team NHL, 18 points ahead of second-place Detroit, 24 clear of the languishing fifth-place Bruins.

With Leo Labine out with the flu, Boston GM Lynn Patrick summoned 22-year-old O’Ree from the Quebec Aces of the minor-league QHL. In 32 games there, he’d scored 7 goals and 18 points.

“It is believed that O’Ree is the first Negro to ever perform in the National Hockey League,” Montreal’s Gazette ventured, with nods to other black hockey talents, including Herb and Ossie Carnegie and Manny McIntyre, star Aces of the early 1950s, as well as to O’Ree’s teammate in Quebec, centre Stan Maxwell.

Elsewhere, across North America, the headlines were bolder. “Young Negro Star Makes NHL History,” a California paper headlined a United Press story in its pages, noting “the lowering of the last color line among major sports” while also deferring to “most hockey observers” who were said to agree that the only reason there had been such a line was “the fact that there hasn’t been a Negro player qualified to make” the NHL.

“His debut was undistinguished as Boston coach Milt Schmidt played him only half a turn at a time,” The Boston Globe recounted, “alternating him with veteran Johnny Pierson.” The thinking there? GM Patrick explained that Schmidt wanted to “ease the pressure” on O’Ree and “reduce the margin of errors for the youngster.”

Dink Carroll of Montreal’s Gazette paid most of his attention on the night to Boston’s new signing, the veteran Harry Lumley, “chubby goalkeeper who looks like a chipmunk with a nut in each cheek.” O’Ree he recognized as “a fleet skater” who had one good scoring chance in the third period in combination with Toppazzini. “He lost it when he was hooked from behind by Tom Johnson.”

Lumley’s revenge was registered in a 3-0 Bruins’ win. “I was really nervous in the first period,” O’Ree said, “but it was much better as the game went on.”

“It’s a day I’ll never forget as long as I live. It’s the greatest thrill of my life.”

Also making an NHL debut at the Forum that night: Prince Souvanna Phouma, the prime minister of Laos, was on hand to see the hockey sights at the end of a North American visit.

Sunday night at the Garden, O’Ree got one opening, early on, when Don McKenney fed him a leading pass. This time, O’Ree shot into Jacques Plante’s pads. With Canadiens re-asserting themselves as league-leaders with a 6-2 win, O’Ree didn’t play much in the game’s latter stages.

So that was that. Afterwards, O’Ree was reported to be grinning, sitting amid a stack of telegrams from well-wishers back home. He described himself as a “little shaky.” “I’m just happy to get a chance up here, that’s about all I can say.” Leo Labine was back at practice next day, along with another forward who’d been injured, Real Chevrefils, so after another practice or two, O’Ree returned to Quebec. 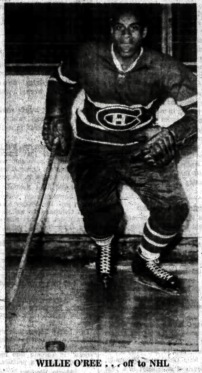 It was three years before he got back the NHL and scored his first goal. Canadiens figured prominently again, starting in the summer of 1960, when the Bruins agreed to loan the winger to Montreal. O’Ree was duly assigned to the Hull-Ottawa edition of the Canadiens, in the Eastern Professional Hockey League, where Glen Skov was the coach. The team had a good autumn, but as happens with farm teams, they paid the price in having their best talents stripped away. In November, Canadiens called up Bobby Rousseau and Gilles Tremblay while Boston beckoned O’Ree, now 25, back to the fold. The Bruins were still down at the wrong end of the standings, just a point out of last place, while also suffering adjectivally in the papers where, if they weren’t “listless” they were “punchless.”

Starting off his second stint as a Bruin, he was numbered 22, assigned to a line with Charlie Burns and Gerry Ouellette. As in 1958, newspapers (like Pittsburgh’s Courier) took due note that the “fast, aggressive forward” was “the first of his race to play in the National Hockey League.”

“The Speedy O’Ree” The New York Times annotated him when he made his Garden debut; in Chicago, the Tribune’s Ted Damata was particularly attentive. “The first Negro” was “on the ice four times, three times as a left winger and once as a right winger. He touched the puck twice, losing it each time, once on a hefty body check by Jack Evans of the Hawks.” END_OF_DOCUMENT_TOKEN_TO_BE_REPLACED