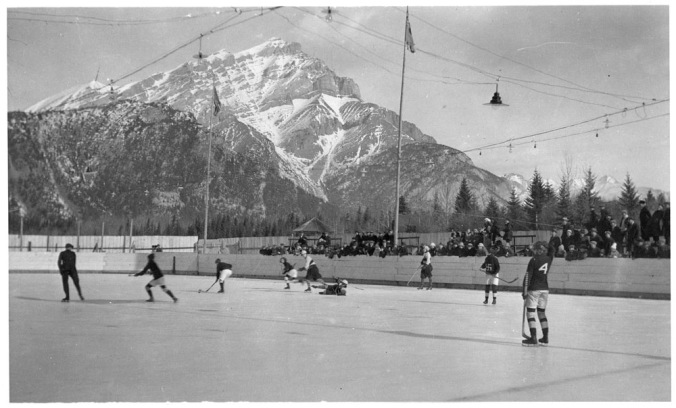 The 1923 Banff Winter Carnival featured — well, where to start? The program for the Alberta mountain festival in February and March included a 100-mile dog-sled race with a purse of $1,000 for the leading musher, along with snowshoeing, trap-shooting, curling, ski-jumping and “ski-running,” tobogganing, and displays of “fancy and art skating.”

Also in the cards: a buffalo barbecue and “swimming in the hot sulfur springs of the government baths.”

The buffalo barbecue was competitive, it turns out, with 77-year-old Colonel James Walker, famous Calgary rancher, soldier, and veteran of the North-West Mounted Police, meat-eating his way to victory ahead of 1500-odd participants. Fifteen teams started the dog-sled Grand Prix, though only four finished, in a blizzard. First across the line in a time of 13 hours and 16 minutes: Shorty Russick and his seven “wolfhounds” from The Pas, Manitoba.

And (of course) there was hockey.

The women’s tournament brought together four teams to compete for the Alpine Cup, the winner of which (said Carnival organizers) would be declared women’s world champions. The holders were on hand, the Vancouver Amazons, along with the Edmonton Monarchs and the Calgary Regents. It was the Fernie Swastikas who triumphed — that’s them here, above, in the dark and (and not yet Nazified) swastika’d sweaters. The team went undefeated that entire winter and were, in Banff, the best of the bunch, by all reports, though the tournament there does seem to have ended with a bit of a whimper.

After beating Vancouver, Fernie played Calgary twice. The first encounter ended in a tie, 0-0. The second game was 1-1 after three periods and remained that way through two ten-minute overtimes. In a third overtime, both teams scored, leaving it at 2-2.

This was on a Saturday night, and organizers declared that the deciding game would go on Monday morning. Over the weekend, after two Calgary players went home, the rest of the Regents declared that they had to leave, too. Despite a flurry of negotiations, Fernie, as the only team to take the Monday ice, was presented with the Alpine Cup.

It didn’t end there. Later the same day, the Swastikas agreed to play an exhibition game in Calgary against the Regents to raise money for the home team’s coffers. That was another 0-0.

None of this dampened the pride with which Fernie welcomed its champions. Thursday morning, when the Swastikas rolled into town on Train 67 from Alberta, much of the town was out to greet them. The mayor had asked all business to close up in honour of the victors, and everybody flocked to the station. A correspondent from The Lethbridge Herald saw it all:

The train was met by a crowd numbering up in the thousands and when the girls stepped from the train they were given three hearty cheers to which the girls replied with their club yell.

A parade wound through town, headed by the RCMP on horseback and the Fernie Pipe Band, “who kept things lively.”  The Swastikas were conveyed in a sleigh decorated with their team colours, red and white. They were followed by floats crowded with schoolchildren; Mayor Henderson rode with the Swastika’s mascot, “an effigy dressed in hockey togs, red sweater and Swastika on the end of a hockey stick.”

Red Glare: You’re more likely to find depictions of footballers, politicians, and dogs in the portfolio of Graeme Bandeira, an illustrator from Harrogate in England who’s resident artist at The Yorkshire Post, but he’s also turned pen and paint to Maurice Richard. For more of his work, visit http://altpick.com/bandy.

“You don’t know how heavy it is,” Eric Fehr was saying, back in June. The Pittsburgh Penguins had just won the Stanley Cup and Fehr, a winger, was telling The Winnipeg Sun’s Paul Friesen about the joy of the triumph and the subsequent uplift, and how he’d wondered, briefly, whether his two surgically repaired shoulders would be able to handle the heft. “You don’t know how it’s going to feel,” Fehr was saying. “You’ve pictured it for so many years. When you finally get your hands on it, it’s a pretty unbelievable feeling.”

The shoulders were fine. “It felt a lot lighter than I thought it would.”

Later, after a parade in Pittsburgh (400,000 were said to have come out), the Cup went on its annual pilgrimage to visit the hometowns of the players and coaches who’d won it. With Phil Pritchard, its Hockey Hall of Fame guardian, Cup travelled to Landshut, in Germany, and to Moscow, Russia. It visited Helsinki, in Finland, and Jyväskylä, too, in the Finnish Lakeland. Swedish stops included Stockholm, Sollentuna, Sundsvi, Södertälje, Luleå, and Nykvarn.

“It still hasn’t fully kicked in,” said Fehr, who got a key to the city from Mayor Martin Harder. “Still kind of a wow factor for me, especially a day like today when you get to walk around with the cup and especially when you see everybody’s faces when they get a look at that cup.”

“We all squeezed the stick,” Gord Downie sang this summer, crossing the land one more time with The Tragically Hip, “and we all pulled the trigger.”

In Denver, Colorado lost its coach when Patrick Roy resigned. It was a surprise, maybe even a shock. Roy said he didn’t feel he had enough say in shaping the roster he was expected to command on the ice. “I remain forever loyal to the Avalanche,” he said, “with which I played 478 games, coached another 253, and won two Stanley Cups.”

GM Joe Sakic was sorry to see him go, but he respected the decision. “We’re all good,” he told Nicholas Cotsonika of NHL.com. It took Sakic just over a week to find a replacement: Jared Bednar, who last season won the AHL’s Calder Cup championship at the helm of the Lake Erie Monsters.

Was it worrisome that by early August Shea Weber still hadn’t travelled to Montreal? People were wondering, this summer, including several writers on the Habs beat.

His agent said no, not a problem, because … summer. Weber was at home in Kelowna, that’s all. “His initial reaction was there was a pause and a little bit of shock,” explained Jarrett Bousquet, the agent. “And then when he realized it was true, he was pretty excited. Obviously, now he’s extremely excited being back in Canada and the pieces that they’ve put together. And he knows Carey Price from B.C. and the Olympics and whatnot, so I know he’s very excited now.”

was a headline running amok across social media last week. It’s true; it happened, in Russell, Manitoba, about four hours’ journey to the northwest from Winkler. While police continue to search for the culprit, a consensus has solidified online that this was

the most Canadian crime story ever, Non-Moose Division (CBS Sports)

The Most Canadian Thing Ever (@Breaking911)

a scene from a clichéd Canadian movie — if it wasn’t so bizarrely real. (CBC.ca)

Defenceman Justin Schultz welcomed the Stanley Cup to West Kelowna, B.C. His parents were there, at Royal LePage Place, beaming their pride.

“This is huge,” his mother Kim Schultz, told Carmen Weld of Castanet:

Kim said she tries to keep it all in perspective and keep Justin and the family grounded.

Artist and writer Doug Coupland had a Stanley Cup question for his Twitter followers in August:

Answer: while interested parties suggested up Bell Centennial Bold Listing, Times New Ransom, and DIN Mittelscrift, the likeliest one seems to be … no font at all. As detailed here, at the Hockey Hall of Fame’s Stanley Cup Journal, the cup’s engraver, Louise St. Jacques of Montreal, uses a collection of small hammers and custom-made letter stamps to knock each letter into the silverware.