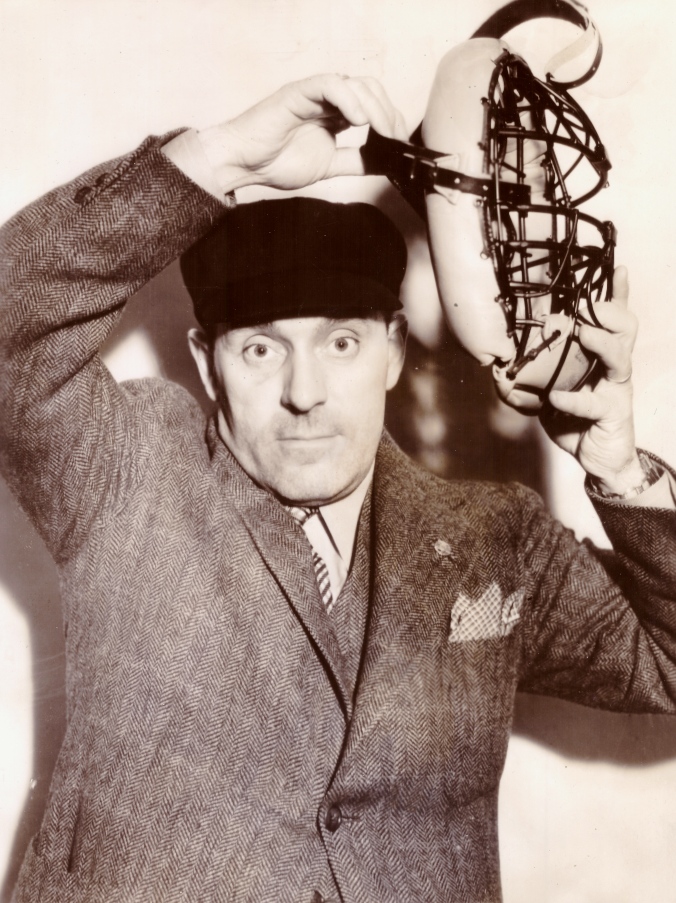 On the Tuesday, he coached the underdog Chicago Black Hawks to their second Stanley Cup win, and his players carried him on their shoulders — by Saturday, he was just another major-league umpire calling strikes on the grass at Boston’s Fenway Park.

That’s how it went for 43-year-old Bill Stewart, pictured above in April of 1938, at the busy end of his first and only full season as an NHL coach. Thursday he left Chicago with a smile on his face. “My contract with the Hawks runs another year,” he told the newspapermen, “and we’ll be out to repeat again next year.”

No-one had expected the Black Hawks to prevail that year. Here’s the Daily Boston Globe summing up the situation:

Accorded little chances of entering the playoffs, the Hawks, with an odd assortment of rookies and old-timers, responded to Stewart’s fiery leadership to upset one favored club after the other, including the Toronto Maple Leafs, champions of the National Hockey League.

It wasn’t true, what was sometimes said of him: that he’d never coached a hockey team before he was hired by Chicago owner Major Frederic McLaughlin. In fact, though he’d only ever played the game on shinny rinks, he had coached high-school hockey in his hometown, Boston, going on to steer the hockey team at the Massachusetts Institute of Technology for seven seasons. He’d played some serious ball, too, including stints with the Montreal Royals and the Chicago White Sox. 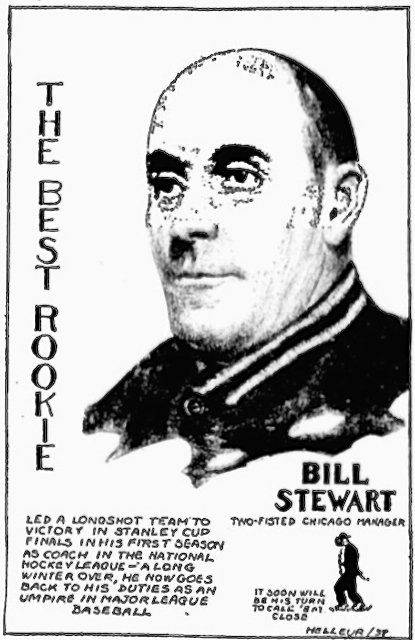 He started his umpiring in 1930, graduating to the majors in 1933. By the time he retired in 1955, be was considered the dean of National League arbiters. He took part in four All-Star games and five World Series.

Starting in 1928, he also served as an NHL referee. His reviews there were, predictably enough, good and bad. In 1936, The Ottawa Citizen deemed him undoubtedly high class: “He knows the hockey code and rules accordingly in a fearless manner.” Then again, in 1931, a player from the New York Americans, possibly Bill Brydge, saw fit to write a mid-season letter to the Toronto Star declaring Stewart’s “special wretchedness.” It was a long missive, with specific complaints, but we can boil it down to a single extract: “He is absolutely rank.”

Stewart did, memorably, forfeit a game in Boston’s favour in 1933 after one of Stewart’s predecessors as Chicago coach, Tommy Gorman, (1) punched him and (2) took his team off the ice to protest a tying Bruin goal.

In 1935, Stewart brought (as Montreal’s Gazette put it) “his methods of authority on the diamond into the Forum.” The Leafs were in town and ended up routing the Canadiens by a score of 10-3. In the first period, when Stewart got into an argument with Montreal coach Léo Dandurand, he did what came naturally: tossed his antagonist out of the game. When Dandurand wouldn’t go, the referee sought a policemen to enforce his order. There was a delay. The Gazette:

No officer of the law appeared, however, and Stewart returned to the Canadien bench and after a heated dispute with Dandurand, the latter finally rose from his seat, went behind the bench and stood there, continuing to direct his team without any undue inconvenience. And at the start of the second period Leo was back on the bench and stayed there for the rest of the game.

That’s the first I’ve heard of NHL coaches sharing the players’ seating, but I guess that’s how it worked then. (Is there enough evidence here to credit Stewart with the innovation of upright, ambulatory coaches? I don’t suppose so.) Also worth a mention: this wasn’t the first time Stewart had ejected a coach in the Forum: earlier that year, he’d tossed Chicago’s Clem Loughlin — the man he’d eventually succeed as coach of the Black Hawks.

Hockey refereeing was harder than baseball umpiring, Stewart said in 1937. In the latter, “it’s either a strike or a ball,” while hockey involved monitoring not only the puck but the behaviour of 12 speeding men. A referee’s most important function on the ice? Watching the blueline for offsides.

“If you miss a trip or a bit of scragging or interference,” he said, “you can depend on the players to even it up among themselves, but if you miss a blue line offside and a goal results you can’t call back that goal, and it may mean the game. But no matter what you do, you can’t be right in everybody’s opinion.” END_OF_DOCUMENT_TOKEN_TO_BE_REPLACED