Stu Cowan at Montreal’s Gazette doesn’t think that Patrick Roy will be the Canadiens’ next GM: Mathieu Darche and Daniel Brière look like the leading candidates to him.

And Roy himself? He’s made his interest in the job abundantly clear. “What do they have to lose by trying me?” he wondered, possibly rhetorically, a few days ago. “Since 1993, the club has been going in circles,” the former Colorado Avalanche coach elaborated. “What do they have to lose by giving me the chance to see what I can do with this club? At the same time, I understand the situation. The club is owned by Geoff Molson and he’s the one pulling the strings. It’s his team and at the end of the day I might not be the guy for him. I accept that.”

We’ll see what happens. But even if Roy’s arrival onto the Montreal job scene isn’t imminent, we can, in these early days of December, clang a bell to mark the 26th anniversary of Roy’s departure from the club.

Roy, of course, steered Montreal to a pair of Cup championships in the salady days of 1986 and ’93. Those wilted significantly on a Saturday night in December of ’95. Canadiens were hosting the Detroit Red Wings, if that’s the verb: the visitors pumped nine goals past Roy on 26 shots on their way to an 11-1 whupping.

“Nobody died,” then-Gazette sports editor Red Fisher autopsied the next day, “but this was, truly, a night in hell for the Canadiens, as a team, and for Roy in particular.”

Pulled by coach Mario Tremblay in the second period, an infuriated Roy made a beeline for Canadiens president Ronald Corey, perched in his seat just behind the team’s bench, to purge his soul, pronounce his truth, predict his future. “This,” Roy seethed, “is my last game in Montreal.”

And so it was. Four days later Roy was headed to Colorado in the best hasty deal that GM Réjean Houle could scrabble together, joining captain Mike Keane on a rail out of town that led to Colorado. Some in Montreal might need reminding that it was Andrei Kovalenko, Martin Rucinsky, and Jocelyn Thibault who came back the other way. Most Canadiens fans won’t have forgotten that it was just a year later the Avalanche (and Roy) won a Stanley Cup championship.

Chalk Talker: Born in Verdun, PQ, on a Monday of this very date in 1933, Scotty Bowman is 88 today, so here’s saluting him. No coach in NHL history has surpassed Bowman when it comes to wins both regular-season (1,244) and playoff (223). As a coach and executive, he was in on 14 Stanley Cup championships over the course of his career, second only to Jean Béliveau’s 17. (Illustration: Serge Chapleau, c. 1974) 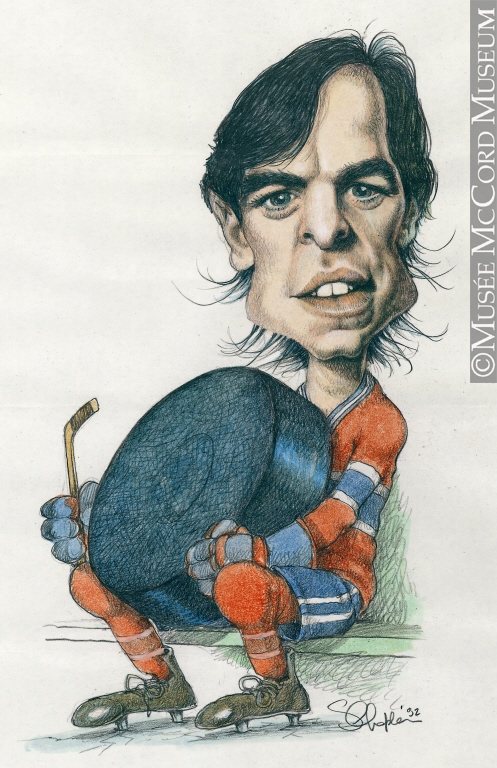 Puckhound: Serge Chapleau’s 1992 watercolour-and-pencil portrait of Russ Courtnall, depicted during his time as a Canadiens winger. The anchored skates suggest that he wasn’t, at this particular point, displaying all the speed he was known for. And indeed it in was in ’92 that Courtnall, having played parts of five seasons with Montreal, found himself swapped to the Minnesota North Stars in exchange for Brian Bellows. © McCord Museum