How it started: Marc Tardif won a pair of Stanley Cup championships with the NHL’s mighty Montreal Canadiens in the early 1970s.

How it ended up: Tardif dominated the WHA as captain and goalgetter-in-chief of the Quebec Nordiques, twice winning league scoring titles along with the Gordie Howe Trophy (a pair of) as WHA MVP. In 1977, he powered Quebec to its lone Avco Cup championship. In the annals of WHA stats, Tardif stands first in goals got, second in points piled up, third in assists accreted.

In between? In the summer of 1973, not long after having helped Canadiens secure another Stanley Cup, Tardif was on the move to the WHA. After three-and-a-half seasons in Montreal, the 23-year-old left winger signed with the Los Angeles Sharks. He may look wistful in the portrait reproduced here, but he had reasons to celebrate his move to California. With Montreal, it was duly reported, Tardif had been making $40,000 a year; in Los Angeles, his annual salary was said to be close to $120,000. (He also got the no-trade clause that Canadiens’ GM Sam Pollock wasn’t willing to offer.)

Canadiens were shedding left wingers at an alarming rate that summer: in July, Réjean Houle would make his break for the WHA Nordiques. Not that the NHL champions didn’t still have options on the port side: for the 1973-74 season ahead, Montreal’s stable still featured a veteran Frank Mahovlich along with up-and-comers Murray Wilson and Yvon Lambert as well as a pair of still-to-be-tested youngsters by the names of Steve Shutt and Bob Gainey.

Marc Tardif led his Sharks in scoring through the ’73-74 season, though that wasn’t enough to buoy the team out of last place in the overall WHA standings. The team moved the following year to Detroit, where they became the Michigan Stags. They only lasted half-a-season there before staggering out of town in January of 1975 to become the Baltimore Blades.

Tardif was gone by then, having joined his old Canadiens’ teammates Houle and J.C. Tremblay in Quebec in December of ’74 in a trade that sent Alain Caron, Pierre Guite, and Michel Rouleau to the Stags. 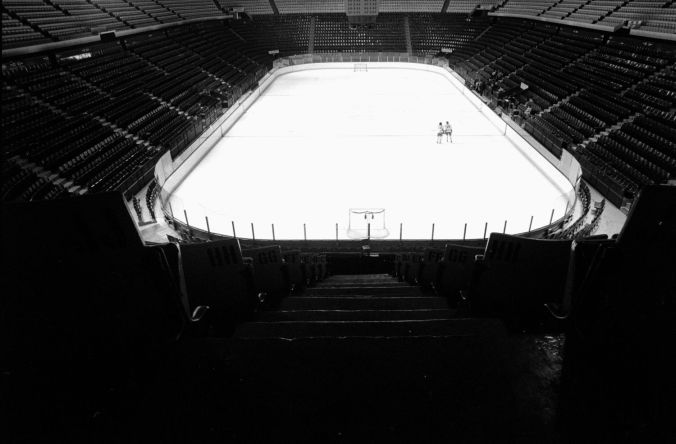 Fin: Guy Lafleur (on the right) on the ice at the Montreal Forum in the late 1970s alongside his long-time left winger, Steve Shutt. Quebec is honouring Lafleur with a national funeral this morning at Montreal’s downtown Marie-Reine-du-Monde Cathedral. (Image: Antoine Desilets, BAnQ Vieux-Montréal) If it’s odes you’re seeking on Bob Gainey’s birthday, we’ve got those here and here. As Peterborough, Ontario’s own Hall-of-Fame right winger turns 65, maybe a short disquisition on how he exemplifies our hometown’s (his and mine) hard-working decency? This way.

In 1979, famously, the great Soviet coach Viktor Tikhonov rated Gainey “the best player in the world in the technical skills of the game.” When Michael Farber, then of Montreal’s Gazette, asked Gainey about this and more the following year, he got (by no surprise) thoughtful answers. “No way am I the best player in the world when you look at talent and pure ability and finesse,” Gainey said. “The one thing about hockey is that the goal of the game is goals, and I don’t score that many. But the other thing about hockey is that it’s a team sport, and if you make the team better, if you make it a more viable thing, then you also are performing an important role. People say, Bob Gainey, he’s so unselfish. Well, maybe that’s partially true, but I also know that by being unselfish, I’m personally gaining more as a member of a team. Only inside a team could I have gained so much.”

Through the 1970s, this team, it’s worth recalling, counted on Ken Dryden in goal, and featured Larry Robinson, Guy Lapointe, and Serge Savard on defence. Up front: Guy Lafleur, Steve Shutt, Dougs Jarvis and Risebrough. Montreal had won four successive Stanley Cups at the time of Farber’s writing, and Gainey was the reigning Conn Smythe Trophy winner as playoff MVP.

“How valuable is Gainey?” Farber asked. “Consider him and Lafleur (which most pop sociologists do like so: Lafleur and his élan represent the French-Canadian; Gainey and his no-nonsense over-achieving, the English-Canadian. Incidentally, lunch with Lafleur includes a $15 bottle of wine; lunch with Gainey comes with two draft beers.) In games without Lafleur during the past two seasons, the Canadiens are 9-3-2. Without Gainey, the Canadiens are 6-5-5.”

At 26, in his sixth NHL campaign, Gainey had had his first 20-goal season the previous year, 1978-79. Compared to Lafleur or Shutt, it’s true, he didn’t score that many, though he would reach the 20-goal mark again in three of his remaining nine seasons with Montreal. Talking to Farber, he said, “It’s like writing a letter. Some nights, the hand flows freely, other days, it’s just scratches and scrawls. I’m not a good offensive player. I don’t have good timing. I’m not one of the guys who usually ends up at the right spot, or who can knock the puck down in the air with a stick.”