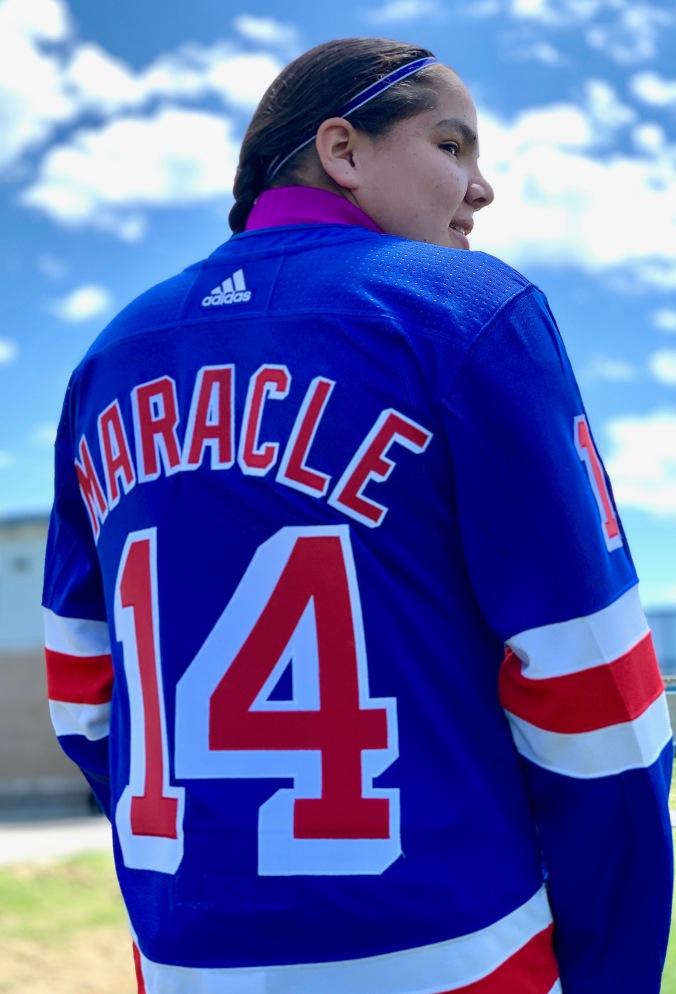 It’s possible (if not probable) that when the Hockey Hall of Fame proclaims a new class of inductees on Tuesday of next week, Buddy Maracle will be among them. Maracle, you’ll maybe recall, was Mohawk, from Ayr, Ontario, and seems to have been the first Indigenous player to have skated in the NHL. His stint with the New York Rangers in 1931 was short (just 15 games), and he died in 1958, facts that would appear to argue against his recognition by an institution that favours prolonged NHL service and doesn’t, these days, tend toward posthumous choices. It’s the case, too, that while Maracle seems to have been a very good player, he wasn’t a great or generational talent. His claim, should it succeed, would be akin to Willie O’Ree’s: if Maracle were to be honoured, it would be as a hockey pioneer.

It could happen. A comprehensive nomination package did go to the Hall in Maracle’s name earlier this year (brief disclosure: I contributed a supporting letter). And Maracle’s story has been gaining more and more attention across the hockey world and beyond. If it wasn’t exactly a secret before 2017, it was fairly obscure and threadbare.

That started to change when Fred Sasakamoose was named a member of the Order of Canada as that year ended. Deserving as that vice-regal acknowledgment was (and by no fault of Sasakamoose’s), the messaging that went along with it was insistently erroneous as institutions that should have known better — looking at you, Rideau Hall and the NHL — blithely identified Sasakamoose as having blazed a trail that, in fact, Maracle had already blazed two decades earlier.

As a matter of history, the oversight wasn’t a good look for the NHL. The league might have attended to their lapse quickly and unobtrusively — maybe as part of the Hockey Is For Everyone initiative they launched in February of 2018 to promote diversity and inclusion in the game. 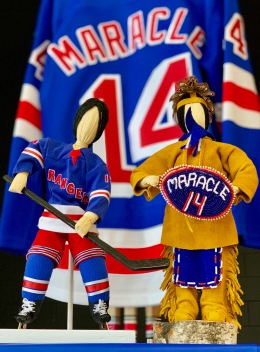 If nothing else, Maracle’s story is a fascinating one that highlights just how hard it was for an Indigenous athlete to make his way to the top of his sport in the 1920s and ’30s. Instead, the league continued to ignore Maracle. Over at their editorial department, a February, 2018 profile of Fred Sasakamoose on NHL.com re-upped the notion that the distinguished former Chicago Black Hawk is “the NHL’s first Indigenous player.” I guess that’s still the official line: more than a year later, the story hasn’t been corrected.

The fact that Sasakamoose seems to have, in fact, been the third Indigenous NHLer (after Maracle and Jimmy Jamieson) isn’t any slight on him or the remarkable things that he’s achieved in his life. It’s possible that the NHL believes that by highlighting — or even acknowledging? — Maracle’s story they might discomfit or embarrass Sasakamoose, and that’s why they’ve kept quiet.

If that’s the case, I don’t think it really makes sense. Facts are facts and flouting them does no-one any good. Media mentions of Fred Sasakamoose don’t always, now, automatically identify him as the first Indigenous NHLer. But it’s also true that the word on Maracle isn’t widespread, and keeps not showing up in newspapers and magazines and online. Assuming that the NHL knows and is assiduously interested in being true to its own history, many in the media do still take the league’s lead in ignoring Buddy Maracle.

Exhibit A: in March, when the NHL’s Canadian media partners from Sportsnet took their Hometown Hockey show on the road to Enoch Cree Nation in Alberta, Maracle was left, unaccountable, out of the picture. It was a remarkable day and an historic one: the Aboriginal Peoples Television Network’s broadcast in Plains Cree of the game between the Montreal Canadiens and Carolina Hurricanes marked the first time that an NHL game went to air in an Indigenous language.

And on an occasion so fully focussed on the future, present, and past of Indigenous hockey, the man who blazed such a crucial trail was entirely, inexplicably absent. Buddy Maracle didn’t rate so much a mention during Hometown Hockey’s extensive coverage that day. 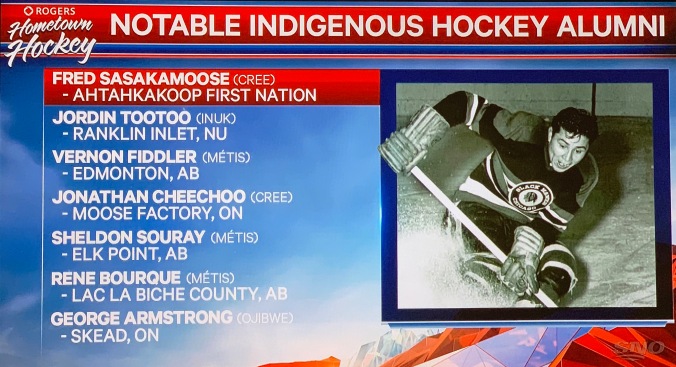 No Show: First in a series of between-periods boards from Hometown Hockey’s March 24, 2019 broadcast from Enoch Cree Nation in Alberta that somehow forgot Buddy Maracle.

It may be that when the Hockey Hall announces its 2019 class on Tuesday we’ll learn that Buddy Maracle’s time has come, along with — who else’s? Maybe will Reggie Leach, the first Indigenous superstar, finally get his due? Or Rick Middleton? I might bet on Vincent Lecavalier and Brad Richards making the cut, if I were betting. And, no question: Hayley Wickenheiser. Is this the year Andy Moog gets the call, or Tom Barrasso? What about Seth Martin, J.C. Tremblay, Claude Provost, Lorne Chabot? And then, of course, there’s the perennial clamour for Paul Henderson.

It’s worth saying that the Hockey Hall of Fame is a sovereign state, independent of the NHL, and that it (in theory) thinks and acts for itself, makes its own choices, follows its own stars. I’m not suggesting that if Maracle and his story don’t break through next week it should be seen in a nefarious light. What it will mean is exactly this: his nomination didn’t get enough votes.

Whatever happens, the Hall has quietly shifted its narrative in the past year. Pre-2018, if you’d steered your way over to the Hall’s extensive online biographical dictionary of all-time NHLers, here’s what you would have read for Fred Sasakamoose: 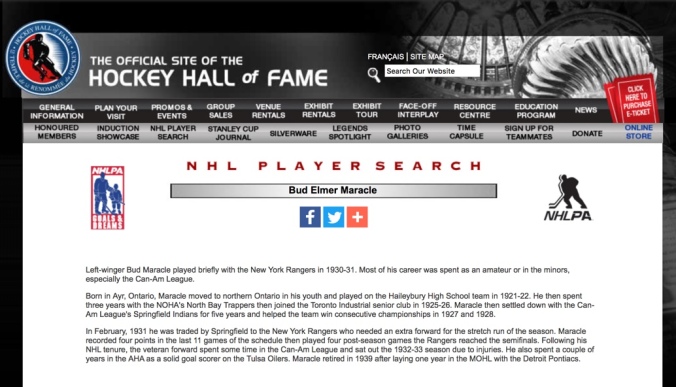 I can’t say just when the change was made, but it’s been several months now since the Hockey Hall of Fame adopted a new line and started informing visitors on their respective player pages (Sasakamoose’s here and Maracle’s here) that while “Fred Sasakamoose is among the first Indigenous people to appear in an NHL game,” “Henry Elmer ‘Buddy’ Maracle holds the distinction of being the first Indigenous person to appear in an NHL game.” So that’s some kind of progress.

Update, October, 2020: The Hall of Fame has now done away entirely with the player biographies that used to appear on the site. Not sure when that excising happened, exactly, but if you click on those links above they’ll show you statistics only. 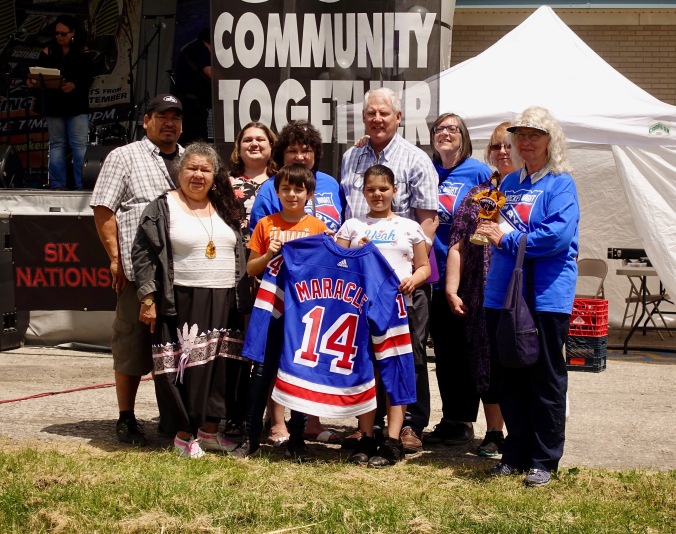 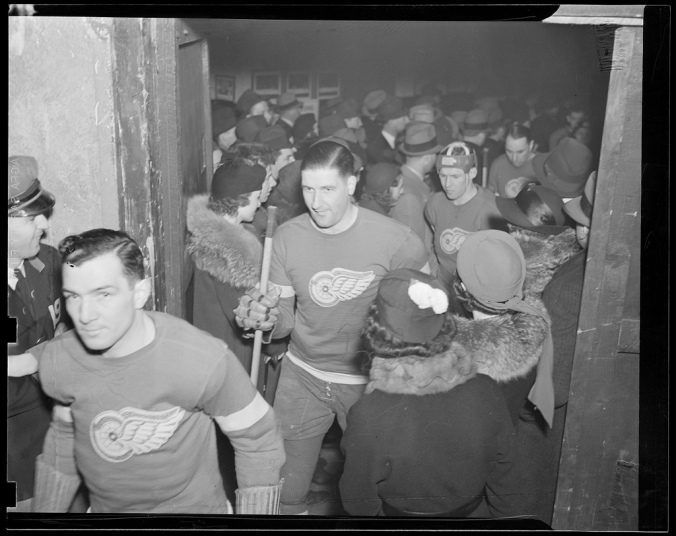 Winging It: Detroit players make their way iceward in the Boston Garden, circa the mid-1930s. (Courtesy of the Boston Public Library, Leslie Jones Collection)

“State without church is like a ship without compass,” Russian hockey legend Vladislav Tretiak was saying recently. He’s president of the Russian Ice Hockey Federation and in a solemn ceremony the Russian Orthodox Church had seen fit to honour him with the Order of Saint Dmitry Donskoy (second degree) for (quote) his merits in bringing up the young generation.

Tretiak and his old teammate Vitaly Davydov were a couple of Soviet-era players who signed their name to a joint statement urging Russia’s team not to fail at the upcoming Sochi Olympics that get underway February 7.

“The whole country will be cheering and fearing for you,” they wrote. “In our time, we did everything for victory, we brought glory to the USSR, our people and our sport. Don’t let Russia down, guys! We are behind you and we are with you!”

Josh Yohe of the Pittsburgh’s Tribune-Gazette was talking to Teemu Selanne this week and that’s when the venerable Anaheim winger said this: “The Penguins have always done things the right way, and have always played the game the right way. Beautiful hockey.”

A fellow Finn, Penguins’ defenseman Olli Maatta, was looking forward to playing against Selanne. “Everybody grew up in Finland admiring him,” Maatta said. “He’s one of our most famous people ever. It’s cool for me.”

“We want more puck possession time,” said the Leafs’ coach, Randy Carlyle this week. “We’re not shooting the puck enough,” was what his boss, GM Dave Nonis, was thinking.

On Twitter, Don Cherry wrote a sort of a poem, sort of:

What a great feeling for Vigneault
to go into Montreal
and beat the Canadiens 1-0.
But nothing
compared to
Cam Talbot.

I understand the puck
went into the stands
on the last play.

At least
he got
a frozen one
from the
penalty box.

Cam said
“it would have meant the world
in any building,
but it’s Saturday night
in Canada.”

I tell ya,
Saturday night
in Montreal
doesn’t get
any better.

How many times do we hear
the players say how great it is
to come to Canada
and play on Hockey Night in Canada
on a Saturday night. END_OF_DOCUMENT_TOKEN_TO_BE_REPLACED 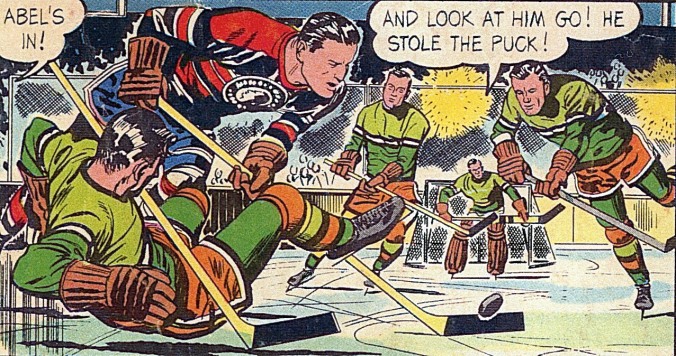 “I don’t know why something happened,” Edmonton rookie Nail Yakupov said this week.

Asked a question, Toronto captain Dion Phaneuf said, “You don’t ask questions.” He’d played a lot of minutes in a loss to the New York Rangers, more than 30, and people were wondering: too much? “As a player, you go out when you’re told to go out,” said Phaneuf.

His teammate, Mike Komisarek, talked to TSN about what happened in practice when he got frustrated by missing the net with slapshots, which is when he swung his stick, from which bits of graphite flew into his face, which is why the doctor had to stitch his eyeball. “It’s not the stick’s fault,” he allowed.

Why so much punching in the NHL since the start of the season? Calgary’s Tim Jackman was asked that and here’s what he thought: “I guess you could say a lot of the fights are from pent-up energy that guys have been holding onto longer than they’re used to.”  END_OF_DOCUMENT_TOKEN_TO_BE_REPLACED