When last we saw them, it was 1970 and Keith Magnuson and Cliff Koroll were just a couple of Black Hawk bachelors living the high life in Schiller Park, northwest of downtown Chicago, out by the airport at O’Hare. They seem to have migrated north after that: a 1971 dispatch has our heroes situated in “the upper-class Chicago suburb of Park Ridge.”

“A long hike,” Magnuson confided to a reporter at the time, “but it’s only three blocks from where all the airline stewardesses live.”

Cheaper, too. Whereas Koroll and Magnuson had been shelling out $375 a month in the first place, and the rent now was $325, Magnuson explained that they were paying just $290, because the owner was a hockey fan.

Various descriptions of the players’ home décor survive. A 1970 description of their set-up:

In the Koroll-Magnuson living room there’s a black-and-white houndstooth couch; three contour chairs and a coffee table set in a sociable semi-circle in the bulge of a bay window; an off-white wall-to-wall carpet and a stereo unit mounted on flat, black walls. The halls are very white, and in Keith’s bedroom — among the “now” hints of flared, belled pants, blazer suits, buckle shoes and Wellington boots, as a traditional Swedish instinct for personal tidiness — is a large print of a leopard hanging above a leopard-patterned bedspread. (In Cliff Koroll’s room, it’s all zebra, more hi-fi and the apartment’s large TV set.)

It’s hard to tell whether this is the old place or the new. Could be, too, that they stayed put, and the newspapers reporting their locations were confused, so all these historical descriptions are of the same apartment at different stages of its evolution. Maybe? Possibly so.

Either way, designer Irv Caplan seems to have been responsible for the touches of tragical hipness and safari wildlife. He’d done Bobby Hull’s house in Glen Ellyn previously. He quoted Koroll and Magnuson a cut-rate price of $5,000 to re-imagine their place, and they’d agreed. “But when we saw all the stuff coming in,” Magnuson later recounted, “we really flipped. We’re guys from Saskatoon. We’re not what you’d call super mod.”

A 1971 feature described “a living room filled with plastic see-through chairs and three bare white tree branches stuck in huge white flowerpots, a dining room papered in black-and-white stripes like a referee’s shirt, and a burnt orange bedroom with a fake leopard bedspread. There were also one black-and-white and three colour TV sets and three stereo sets in the apartment.”

From a 1973 account we get the scoop that the scene we’re seeing in the top photo involves “Naughahyde masquerading as zebra, plastic ibex horns, and contrasts in black and white with red carpeting.”

Magnuson’s bedroom featured the mounted bill of a 150-pound marlin he’d caught while fishing off Jamaica, along with a blow-up of a grinning Magnuson that had featured on a 1970 cover of Sports Illustrated. Also on display, as noted by a visiting reporter, Paul King:

On a dresser sat a gold-plated hockey puck that Bobby Hull gave Magnuson when he scored his first NHL goal, and on top of it Hull had added a gold-plated tooth — the first that Keith had knocked out of another NHL player’s head: Earl Heiskala, Nov. 11, 1970.

I guess I’m not surprised to learn that Magnuson had a bar in his bedroom, which is to say (as King does) “a bar-cum-bookshelf.” This was home to several trophies and “an impressive five rows of hardcover books (from Nabokov to Joseph Heller).”

Those all belonged to Koroll, Magnuson confessed. “I only read when I have to know something,” he said. King pursued this:

He has read two of Dale Carnegie’s books, Lloyd Percival’s Hockey Handbook (“It was my bible as a kid”) and [Jim Bouton’s] Ball Four. He remembers reading Steinbeck’s The Pearl once, and a few other novels. But he forgets what they were.

What’ll It Be: Keith Magnuson at home, at the bar. 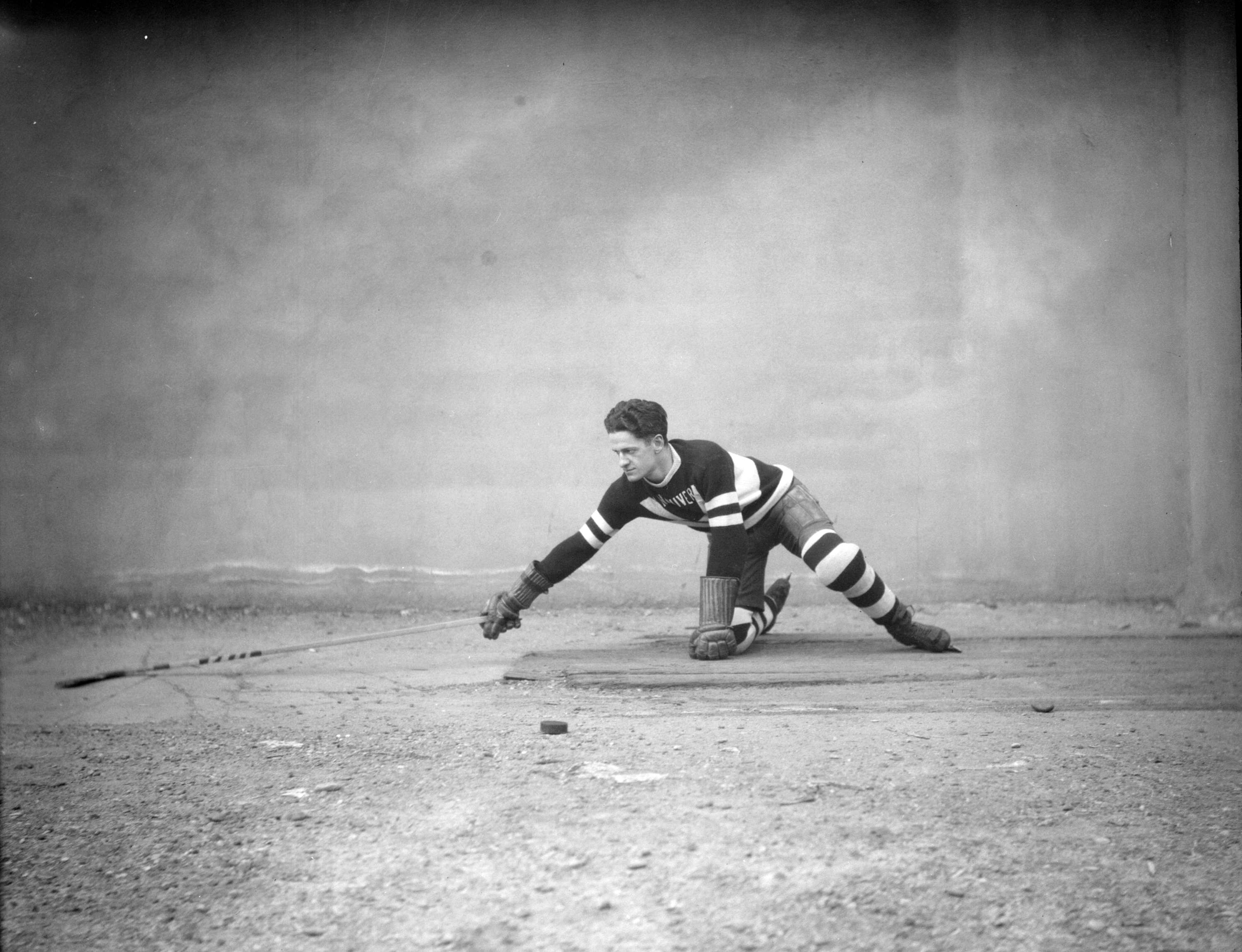 A reader writes: what, exactly, is a hook check?

It’s a fair point. If you’ve roamed as far as page 87 in the hardcovered Puckstruck, you’ll have learned things about Frank Nighbor and Jack Walker and their hook-checking exploits that you never knew before without having been provided on the page with an actual definition of the lost, lamented art.

“The passage about the hook check drove me crazy!” read the e-mail that came in from Kingston this week. Steven Heighton was perplexed. “I mean, what IS a hook check? You never say. I wanted to try it out in my game today . . .

“I suspect the omission was deliberate; you’re playing on the poignancy of an aspect of the game being utterly lost. The omission is in fact Borgesian, or Nabokovian (two other writers who never wrote about hockey.) Aesthetically, your strategy is sound, but on the level of pure athletic curiosity, I still want to know.”

Much as I like Borgesian — okay, I like Nabokovian, too — the truth is that the lack of a definition is one more oversight of mine. The hook-check file in my office is filled with hook-check facts and info; some of it just never got into the book.

In Let’s Play Hockey: How You Can Be A Hockey Star (1957), Lynn Patrick and Leo Monahan suggest that players be versed in five important checks. In order, they’re the hook, the poke, the sweep, the stick lift, and the body.

It consists of a defender going down on one knee, extending his stick flat on the ice and hooking the puck away from the carrier. When properly executed the hook check is a pretty play to watch and a hook-check artist will come up with the puck nearly every time.

That’s the point of the hook: to secure the puck. That’s where it’s distinct from the poke and the sweep, which are disruptive rather than possessive: doesn’t matter where the puck goes so long as it’s not on your opponent’s stick.

The sweep and the hook are often confused, with the terms used interchangeably, as if they were one in the same check. This was the case even in earlier hockey eras when they were regularly deployed. But while the motions of sweep and hook (as illustrated below) are similar, they are wholly different checks.

The hook requires surgical skill and, if executed properly, yields the puck.

The sweep is a blunt instrument, a  tool of disarray. “It is,” as Patrick and Monahan write, “a sweeping slap at the puck to jar it loose.”

The sweep, like the poke, takes technique; the hook is an art. Go ahead, try it. Also in the file I find the following cautionary tale from 1923. Harry Hellman was a substitute right winger for the Ottawa Senators. The team was preparing for a Stanley Cup semi-final in Vancouver when:

… Hellman suffered a serious flesh wound in the face during practice. In hook-checking [teammate and master hook-checker Frank] Nighbor, he lost his balance and fell on Nighbor’s skate, cutting open his cheek and injuring his nose. Hellman is in St. Paul’s Hospital here, and it will be impossible for him to play again this season.