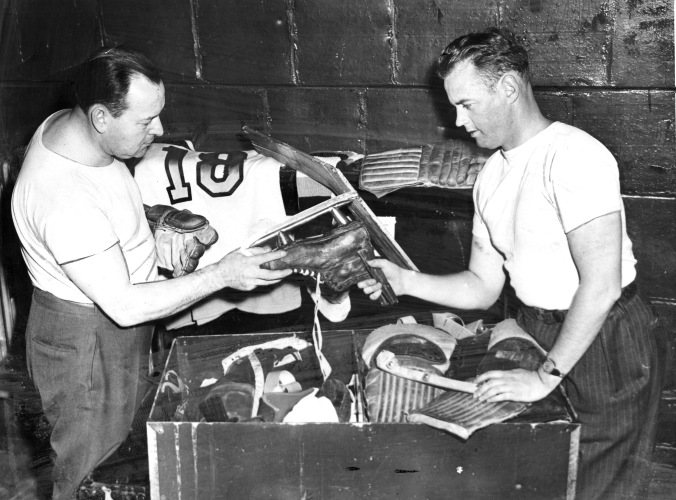 Everything Goes: Skates and sticks and gloves, the sweater numbered 18 that left winger Red Hamill would be wearing. In October of 1941, Boston trainer Win Green (left) packed it all up with his assistant, Hammy Moore, for shipment to Hershey, Pennsylvania, where Art Ross’ Bruins convened their training camp ahead of the new season, scheduled to open November 8, in Toronto.

Foot Faults: Boston trainer Win Green works his tape and gauze on Terry Sawchuk. The goaltender’s mostly unhappy stint as a Bruin began in 1955 when Detroit traded him to make way in their nets for Glenn Hall. By early 1957 Sawchuk, ill and agitated, had turned his back on Boston midway through the season, retiring at age 27, and heading home to Detroit. By summer, he was back with the Red Wings in a deal that saw GM Jack Adams send Johnny Bucyk and a parcel of cash to Boston. AP was on hand at the announcement in June of ’57: “In contrast to the edgy, scowling individual who quit the Bruins at mid-season, explaining he was too sick and nervous to continue in the nets, Sawchuk was smiling and obliging today,” Dave Diles wrote. “He told newsmen at a press conference, ‘I never felt better.’”

Bobby Bauer ended up in hospital in 1942, a month after he started skating for the RCAF Flyers. As a Bruin he’d only missed one game in five years, but serving his country he ended his season in practice with a fall that broke his collarbone. Above, his wife, Mauguerite, helps him with his shaving.

Porky Dumart was a defenseman all his amateur days — it was Art Ross who made him a left winger. As noted, Battleship Leduc was the one, coaching Milt Schmidt, Dumart, and Bobby Bauer when they played for the Providence Reds in 1937, who named the line. There are a couple of variations on this. Dumart says that he called them the Sauerkraut Line, which was later shortened to Kraut Line, “for our little German hometown.”

In 2002, Schmidt told it this way to Kevin Shea at the Hockey Hall of Fame. Leduc said:

“All you fellas come from Kitchener-Waterloo. There’s a lot of people of German descent from there. We gotta get a name for ya — the Kraut Line!” We didn’t mind. It was a name that kinda stuck to us.”

“It didn’t bother us,” Schmidt said in 1990. “The called us squareheads and everything else you can imagine back then. Who cared?”

War with Germany doesn’t seem to have brought about any immediate change in nomenclature. The Kitchener Kids was another nickname that dated back to their earliest days in Boston, and sometimes you see that in the wartime accounts, but mostly it’s Krauts.

A Boston paper, The Daily Record, did run a contest asking readers to rename the trio. And the winner was … The Buddy Line. “It didn’t last,” Schmidt said.

In February of 1942, joining the RCAF, he did think about adjusting his own name for the duration of the war. He asked his mother what she’d think of her son shipping overseas as a Smith. Go ahead, she said, fine.

“But I didn’t; I stayed with Schmidt. What the heck, I’d had it all my life.”

Arriving in Ottawa, they were described as “a mild-mannered group,” polite, not much to say. “We’re glad to be here,” Bauer confided. “We’ll do anything we can to help the air force. We’re taking this business seriously. Whether we play hockey depends on the air force and we’ll do our best to help the other members of the team bring the Allan Cup here.”

Which, of course, is just what they did, come April, though Bauer didn’t make it all that way, going down wounded in action, with a collarbone he fractured in practice. END_OF_DOCUMENT_TOKEN_TO_BE_REPLACED

The Worn, The Torn: Boston trainer Win Green (in the rubber gloves) tends to a couple of Bruins, circa 1939. That’s Dit Clapper in the towel and stripy socks with his ankle in the … toaster? Reading the funnies in the foreground, resting his wounded head: Bill Cowley, possibly? (Courtesy of the Boston Public Library, Leslie Jones Collection)