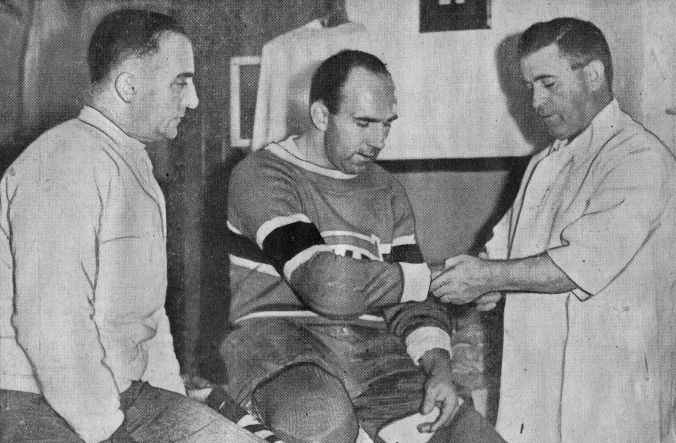 The great Howie Morenz was born on a Sunday of this date in 1902 in the southwestern Ontario village of Mitchell. That’s where he first took to skates, atop the local Thames River, and first seized a stick. It was in nearby Stratford that Morenz started to make his hockey name and, when the ’20s were still young, signed the contract Leo Dandurand put in front of him to make him a Montreal Canadien.

The scene here has Morenz, in the middle, under examination by long-serving Canadiens trainer Jimmy McKenna while coach Cecil Hart, left, looks on. The latter piloted Montreal to successive Stanley Cups in 1930 and ’31, though my instinct is that this photo might date to 1936-37, when Hart and Morenz both returned to Montreal for one last season together. Morenz died, of course, midway through the year. He was 34.

As for McKenna, who also reached his 30s that decade, his years tending Montreal’s players made him a veteran: he’d been on the job with the team going back to the very dawn of the Canadiens in 1910.

“I’d say that Morenz and [George] Hainsworth were about the two players who caused me the least trouble in all the time I’ve been with the club,” McKenna said in 1940.

“Naturally I look upon Howie as the greatest of all players. But my opinion is based also on the fact that he never crabbed, and that he was easy for a trainer to handle. It’s hard to believe just how little trouble he’d cause you.”